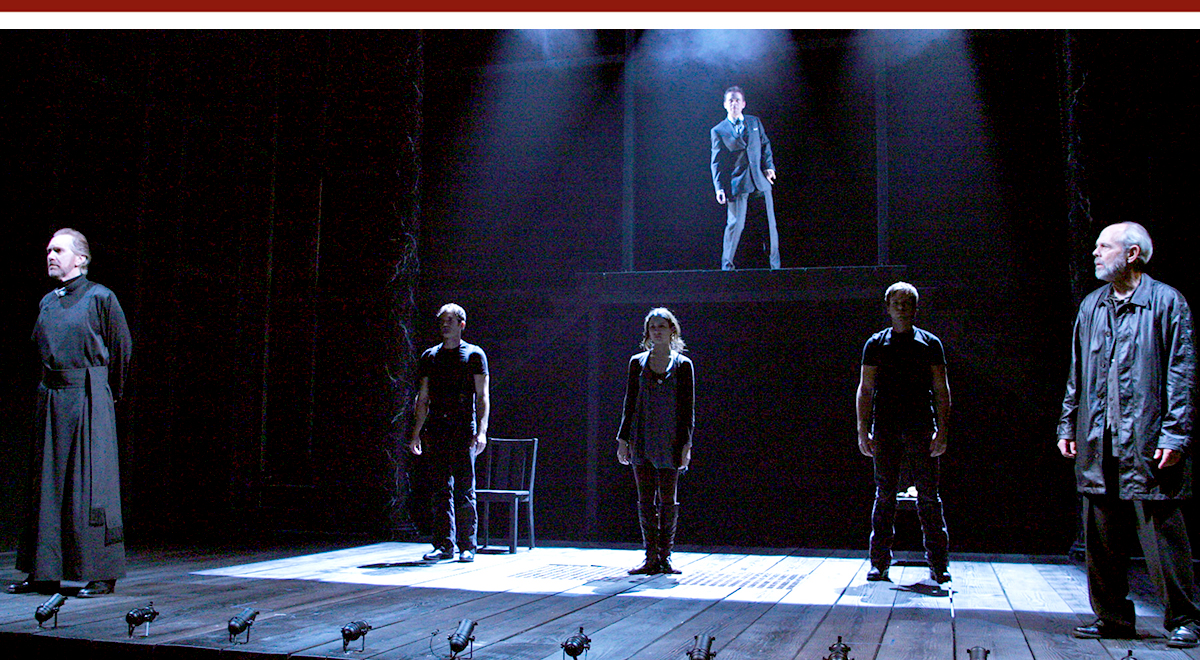 Art (and) the thing itself

In Bill Cain’s Equivocation, a fact-based fantasia on how real life may have filtered into several of his plays, a modern-dress William Shakespeare hastens from prison cell to rehearsal hall to the seats of power. The rooms seem eerily interchangable on the dungeon-black set director David Esbjornson has designed for the Geffen Playhouse production (through December 20). Whether gathering research from a royal insider or helping his actors interpret the resulting script, the writer is central to the pursuit of truth and an artful way to retell it. This is not Cain simply patting his peers on the back, however. It is a complex – and fascinating – exploration of whether, in its distance from the thing itself, art does more to illuminate or equivocate.

Cain sets Equivocation between November 1605 and March 1606, a winter of discontent if ever there were one. Shakespeare, “Shag” (Joe Spano), is rehearsing King Lear with his acting company, The King’s Men: “Richard” (Harry Groener), “Sharpe” (Patrick J. Adams), “Armin” (Brian Henderson) and “Nate” (Connor Trinneer). When he floats the idea of writing a play about the recent Gunpowder Plot and the ongoing arrests, interrogations and trials, he is reminded that he never stoops to depict current events. Yet, in Spano’s fine portrayal, the playwright is tormented by the need to be relevant. If the pen be mightier than the sword, a great dramatist not only needs to wield it, he needs a target worthy of his words.

The failed Gunpowder Plot took place around the time Shakespeare was writing Macbeth, and there is scholarship to support Cain’s contention that the play does slyly comment on the event and caricature its prosecutors. [See Witches and Jesuits: Shakespeare's Macbeth by Garry Wills.] After the death of the Catholic-persecuting Elizabeth I, two years earlier, there was hope that the ascendant James I would inspire greater religious freedom. When it quickly became obvious that he would not, about a dozen men began an ambitious plot to dynamite the House of Lords on November 5, 1605, the day James I would address Parliament. In the same way actor John Wilkes Booth thought his action would incite rebellion 260 years later, the Catholic plotters expected to unleash religious war.

Were Cain’s goal to simply stir up 400-year-old conspiracy theories, the two-and-three-quarter-hour play would seem even longer. He instead offers inquiry into the very nature of art, something contemporary audiences face each time a film includes the title card “Based on Actual Events.” He further enlivens the debate by mixing in references to Shakespeare’s life and work and some self-deprecating humor about the form. Richard chides the troupe, “It’s a play! We’ve been through more.” Shakespeare’s daughter Judith (Troian Bellisario) goes beyond belittling. She berates her father’s fondness for soliloquies and mocks storytelling in general for the falacy that there are “beginnings” and “endings.”

This line between the stage and the action echoes throughout the play. One admonishes, “The truth must be lived” (as opposed to “portrayed,” we assume). And yet, someone else notes that, “every time an actor walks on stage, he proclaims ‘I am,’” suggesting that, by the very realness of flesh-and-blood stage actors, there are ineffable truths beyond the performance.

The actors, other than the two portraying the Shakespeares, play several roles. However, the program lists only their King’s Men characters: Richard Burbage, Richard Sharpe, Robert Armin, and Nathan Field. This further reminds us that everything we experience in theater is a dramatic refraction. There is further blurring in the way Robert Cecil's withered arm and club-foot recall Shakespeare’s Richard III. It also cartoons Cecil (Trinneer), the King's powerful right-hand-man, as an evil inside architect of the plot, correctly assuming it would discredit Catholics and further distance them from equal participation.

That Frances Kenny’s era-erasing costume design makes Shakespeare and the others contemporaries of the audience is an obvious indicator of the play’s intended relevance for 21st Century America. The clarion example is the repeated insistence that confessions obtained through torture are meaningless.

In addition to Spano's fine turn, Adams is a particular standout as Sharpe and James. Trinneer, too, creates distinction as he moves back and forth from court to stage. Groener gives Burbage a lively actor-persona in contrast to his dignified-in-the-face-of-death portrayal of the doomed Father Henry Garnet. Henderson (a co-lead in CTG's Little Dog Laughed last year) is solid, while Bellisario makes Judith seem stern and unforgiving while allowing honest affection for her father to periodically peek out from undercover.

Equivocation should find favor with those who savor theater the way baseball fans are riveted by a tight pitching duel. Not only is the play similar in length and pace to the rubber game in an important series, it offers enough historic references to thrill a sports statistician. Cain, Esbjornson, Spano and company open up Shakespeare’s mind, family ties and contemporary world in a way that provides rich viewing for our world. Not surprisingly, it was championed and premiered at the Oregon Shakespeare Festival, a West Coast mecca for demanding drama fans. Kudos to the Geffen for bringing it to L.A.

HISTORY Recipient of a 2008 Edgerton Foundation New American Play Award, Equivocation was developed at TheatreWorks in Palo Alto, the Ojai Playwrights’ Conference, and then premiered earlier this year at the Oregon Shakespeare festival. 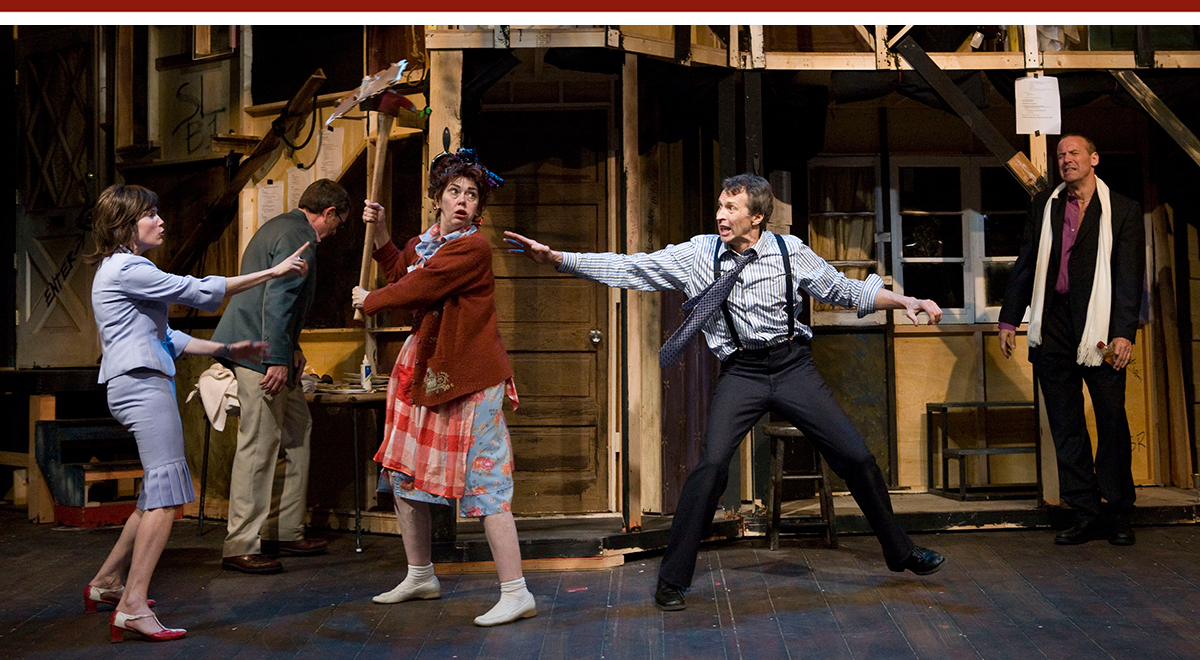 Michael Frayn’s Noises Off has found a home at A Noise Within. While the 17-year-old company has given the 17-year-old comedy a well-paced turn, thanks in great part to a cast that turns characters into people, the farce-within-a-farce gets an assist from the house. Once again the cramped old hall is the “tenth player on the field,” confining the set-within-the-set to appropriately modest scale and heightening the onstage lunacy with an air of long-term survival that assures "this too shall pass."

A Noise Within takes theater tradition seriously. It still maintains an unwieldy repertory schedule (three concurrent productions in rotation) and a steady acting company to perform it. Although honoring the commitment to an acting company can undermine precision casting, it creates connections between actors, and that is one of the intangibles behind the success of this Noises Off.

Director Geoff Elliott, the company co-founder and co-artistic director who is directing three of this season’s six productions, takes on a fourth assignment by playing Lloyd Dallas, the womanizing director of Nothing On, the play-within-the-play. An artistic director brings a seasoned temperment to the role of a director – of and in a production. And, having lived through his share of real-life stage calamities informs Elliott’s Dallas with the perfect droll deadpan upon which the actors’ mounting hysteria becomes all the more hysterical.

Over three acts, Frayn's staple of commercial and community stages follows an English troupe as they careen from disastrous final dress rehearsal through two performances on their tour: one, days after opening, and the other days before the end of the run. Elliott has the action working both ways. Though most of the humor springs from things going haywire, there also are times where the farce is working according to the script-within-the-script. Along the way, his actors continually earn bigger laughs by seeming to want to avoid errors, rather than relying on them.

Each act of Noises Off is a different performance of Act I of Nothing On, a standard British sex farce that is touring the English Midlands. The action takes place in the main room of a home whose owners are on holiday in Spain (in part to avoid the tax authorities). The home is in the care of their housekeeper and a real estate agent hired to find renters. First, however, he’ll use it for an afternoon tryst with a lady from the Inland Revenue. Unfortunately, it’s the same day the owners sneak back home. It's also the day a daft old burglar, thinking the place is empty, breaks in. Through a series of perfectly timed entrances and exits, through a half-dozen doors around the set, they all manage to avoid each other for most of the act.

Special appreciation must be given to Salazar, who gives a detailed performance of a man gradually coming unraveled. His Garry Lejeune seems a competent actor – unlike Dotty or Frederick. Instead, his problem is jealous rage prompted by a questionable backstage romance. It is a performance as incendiary as it is controlled, and it has been allowed to stand out as this production's emotional high-end against which the others can differentiate. Regulars like Hill, Strang, Dukakis and Rockwell, now with Klingaman (a fine Anne in the currently running Richard III) and Anthony, lay the groundwork for debuting Kosloski (one of Joan Rivers’ aides in her recent Geffen premiere) and Salazar (returning after Arms and the Man a couple years back).

Elliott has a fine design team in Adam Lillibridge (set), Soojin Lee (costumes), Ken Booth (lights) and Patrick Hotchkiss (sound). The play runs in rep with Richard and an adaptation of Crime and Punishment through December 19.

by MICHAEL FRAYN
directed by GEOFF ELLIOTT and JULIA RODRIGUEZ-ELLIOTT