INHERIT THE WIND by Jerome Lawrence and Robert E. Lee | The Old Globe
OUR HOUSE by Theresa Rebeck | Lounge Theatre 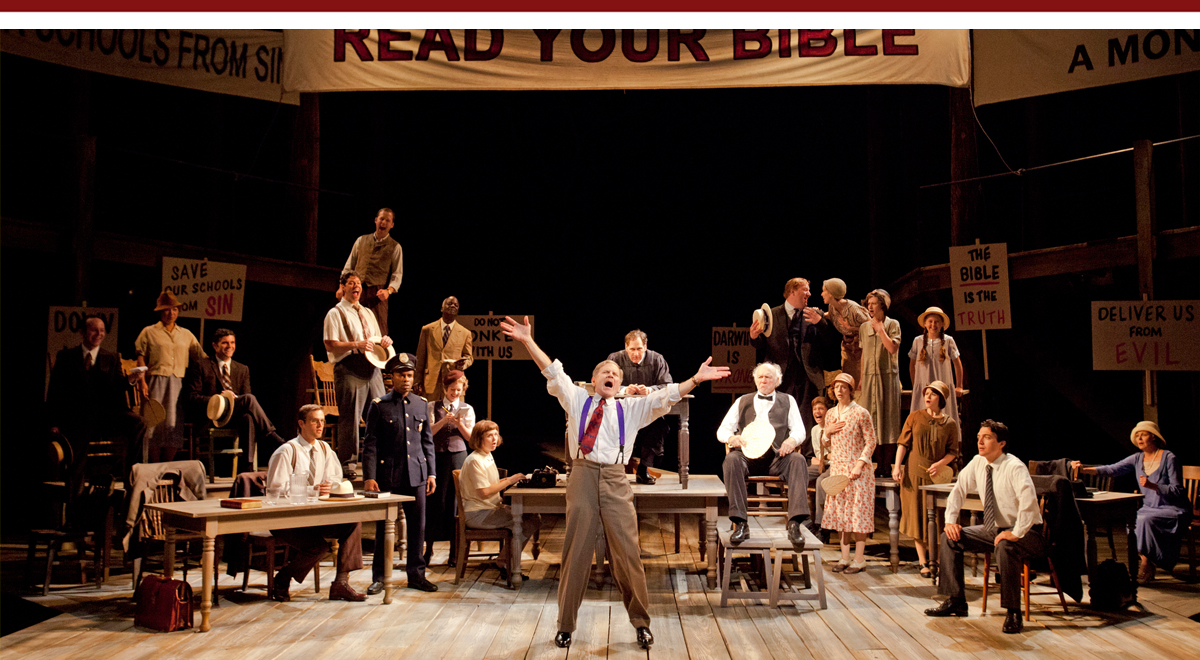 In 1925, the state of Tennessee prosecuted science teacher John Thomas Scopes for breaking a months-old law banning the teaching of evolution. A generation later, his trial inspired Inherit the Wind, the first play by Jerome Lawrence and Robert E. Lee, America's most successful writers of radio drama. Neither the trial nor the 1955 theatricalization was as straightforward as it appeared, but for today's audiences, solid revivals like Adrian Noble's Old Globe Festival staging (through September 25) still draw currency from the ongoing science-religion stalemate.

In the play, and the subsequent 1960 film, the trial becomes a match between the accused's and accuser's larger-than-life legal counsels. More importantly, and universally, through them it presents the tug-of-war between the inquisitive nature of science and the rooted orthodoxies of religion. Henry Drummond (Robert Foxworth) is based on Clarence Darrow, the famous attorney who defended Scopes, here fictionalized as Bertram Cates (Dan Amboyer). The state's position and the general assertion that The Bible has civil authority is advanced by Matthew Harrison Brady (Adrian Sparks), based on the more-famous, three-time Presidential candidate William Jennings Bryan.

The play, which is set in fictional Hillsboro, as opposed to the actual Dayton, Tennessee, opens with children playing. Record-breaking heat was broken briefly the previous night by a slight rain. It's drawn out some earthworms that Howard (Aiden Hayek) waves at Melinda (Lou Francine Rasse). "You and your whole family was worms once," Howard teases. "We was not!" she shouts back. Lawrence and Lee have quickly established the weather as a metaphor for oppressiveness, the trickle-down of Darwinism to the schoolyard, how indoctrination plays out among the innocent, and a display of the pre-pubescent taunting that will evolve into the mating practices that are vital to the natural order but too unruly for religious order.

We meet Cates in his jail cell, where the bailiff (Jacques C. Smith) has come to fetch him for a visit from his girlfriend, Rachel (Vivia Font). The injustice of incarcerating an earnest teacher sets the stage, while Rachel is portrayed as so innocent that she is aligned with Eve. She declines an apple offered by reporter EK Hornbeck (Joseph Marcell), based on H.L Mencken, who reassures her, "Don’t worry. I’m not the serpent, Little Eva. This isn’t from the Tree of Knowledge."

This occasional use of Biblical imagery indicates the authors' respect for the literary value of The Bible, whose Proverbs have provided the play's title: "He that troubleth his own house . . . shall inherit the wind."

We ease into the courtroom from there, and Noble builds to the conflict gradually, lingering with the townsfolk as they welcome the confident, celebrated Brady. For his opponent's entrance, the director and lighting designer Alan Burrett dutifully backlight the "slouching" Drummond in sunset red, eliciting screams of "It's the Devil!" from Melinda and a warm "Hello, Devil. Welcome to Hell," from Hornbeck. It's the first of several over-stagey touches that add fun, but prevent Inherit from being the masterpiece many claim.

All this time, Ralph Funicello's set, which began as a gentle tumble of chairs and strewn tables, gets rearranged by cast and crew into the various locations, suggesting the disorder out of which religion, science, and law must all be organized. By the end of the first act, which comes with completion of jury selection, the tables snake back towards the stage right wings, providing a walkway for exits and entrances and a vaguely serpentine, or fishtail, image for the story.

The difference between what happens in the contrived Hillsboro and what happened in the Dayton courthouse moves the play away from history. In the original script's prefatory disclaimer, the authors emphatically declare Inherit "is not history," nor did it "pretend to be journalism." They write, "The collision of Bryan and Darrow at Dayton was dramatic, but it was not a drama." The fact is, their real goal wasn't to expose fundamentalist overreach, but, as Lawrence told reporter Jonathan Mandell in 1996, to challenge the rise of McCarthyism, just as Arthur Miller's subtler Crucible had done in 1952.

The authors let their contempt for McCarthy slip into their portrait of Brady. This presents a director's biggest challenge. Fortunately, Noble has found in Sparks an actor who can fill Brady with gas without letting him rise into caricature. He might even avoid what constitutional scholar Gerald Gunther is quoted as saying in Edward J. Larson's Summer for the Gods: "I ended up actually sympathizing with Bryan, even though I was and continue to be opposed to his ideas in the case, simply because the playwrights had drawn the character in such comic strip terms."

Foxworth plays Darrow as a steely provocateur who seems to realize he has time on his side. As Bert, Amboyer blends into the background, despite a couple of well-performed showcase scenes. On the other hand, Font shines as the symbol of conflicted citizenry, the daughter of the unflinching Reverend Brown (Charles Janasz) who must choose between The Bible and Darwin's Origin of Species.

The authors use of the trial to attack McCarthy follows its specious origins. After the law was established by the March 1925 passing of the Butler Act, the American Civil Liberties Union (ACLU) immediately offered to defend any teacher willing to challenge the law by teaching evolution. Scopes volunteered and was arrested in May. According to Larson, unlike Cates, Scopes "was never jailed or ostracized. Quite to the contrary; in the month before his trial, Scopes was feted at a formal dinner in New York City; embraced by the presidents of Harvard, Columbia, and Stanford universities; received at the Supreme Court in Washington; and awarded a scholarship for graduate study at the University of Chicago." The ACLU generated international publicity for its role in challennging the law and continues to cite its importance in the promotion its mission.

Today, Inherit the Wind is best seen in terms of its church and state arguments. As the recent How the World Began showed in the recent "intelligent design" controversy, the issue can never be settled. The fact that this production immediately follows The Old Globe's staging of The Scottsboro Boys, which is based on a more outrageous trial just six years and 100 miles downstream, underscores the power of theater to explore America's evolution. It also suggests why Lawrence and Lee may have chosen the name Hillsboro for their setting.

With apologies to Graham Nash, our house for Our House was a very, very, very odd house. Three weeks into the West Coast premiere of Theresa Rebeck's 2009 send-up of dangerous television trends, we attended what turned out to be the first of three understudy performances. Six of seven actors were on for the first time as a unit.

Unusual, but that wasn't the odd part. Director Kiff Scholl's second line did not compromise the production. The performances were fine, with Laura Emanuel, Edward Kiniry-Ostro, and Jacquelyn Zook contributing standout work.

Nor was the oddest part the fact that, on the day the nation watched news of that morning's theater shootings in Colorado, a sign at the door of the Lounge's larger space warned "there will be gunshots at this performance."

It was a party of five among the scattered friends of the understudies, who turned the front row into an unrelenting, over-the-top laugh track for virtually every line of dialogue.

Regardless, it was possible to see why Our House, a topical play by one of the hotter American playwrights, took three years to cross the country after its Off-Broadway premiere, and land in the corner-market-coziness of the Lounge Theatre instead of the Pasadena Playhouse or Mark Taper Forum, where Rebeck's last two arrivals have been staged. The play's shortcomings are baked into the structure. More nuanced performances might have helped clarify the mix of black comedy farce and social criticism, particularly an interminable Act I shouting match between one sympathetic Alice (Emanuel in for Rachel Germaine) and the poorly designed Merv, who Pete Caslavka (in for Kyle Ingleman) was unable to make sense of.

There are two "houses" in the play, only one of which we see. That one, which fills Dan Mailley's set, is shared by Merv, Alice, Grigsby (Chevon Hughes in for Jennifer Kenyon), and Vince (Jesse G. Louis in for JB Waterman). The other house is the locale of a reality show called "Our House," which only Merv watches. Jobless, he has plenty of time for television while the others are at work. He also eats his roommates' food, is months behind in paying his rent, and somehow manages to bully the others into letting him stay. There are indications he had the place first, but Rebeck doesn't make that clear. This is a general problem for the play, which substitutes sketchy archtetypes for people. As a result, when we reach the horrific and outrageous later, there isn't anything solid to bounce off.

"Our House" is hosted by its network's morning show co-anchor, Jennifer Ramirez (Zook, in for Ajarae Coleman). Ramirez' ambition, talent, and good looks have made her a rising star. She has caught the eye of network president Wes (Mark Belnick, the one regular cast member onstage), slipping into an office romance with the married exec. This, along with the general degradation of the station's integrity, has producer Stu (Kiniry-Ostro, in for Patrick Hancock) at wit's end.

Rebeck's attempted whilstle-blowing on television's transgressions ends up transgressing itself. She models Jennifer and Wes on Julie Chen and Les Moonves. Adding some reality to the play is appropriate, but she steps in the same tarnish her targets apply when she makes the office romance adulterous. Chen rose fast with Moonves' support, moving from CBS' "Early Show" to "Big Brother," now in its 14th Season. However, they became involved after he had separated from his first wife, and then, according to all accounts, waited until he was divorced to pursue and marry Chen.

The plot goes way off the rails with an act of violence that comes out of nowhere. It provides fresh meat for the vulturous news division to exploit, with Ramirez' on-scene reporting giving her huge exposure. There aren't any big ideas here to surprise urs. What might have redeemed it would be delving into what motivates these people, but they remain cardboard characters who, and again it's hard to fault a cast effectively in its first preview together, aren't filled in by the acting. Scholl does manage to score a remarkable doppelganger for Moonves in Belnick. It's something the Playwrights Horizons production made no effort to do, but it's a good look here where we can use some zest.

Mailley's set, Sharell Martin's costumes and Matt Richter's lights all help ground the production in the real world, while Corwin Evans gets the highest honors for a slick pre-show video montage that promises a slick production. Technically solid, the video is an unfocused blur of political scandal, horrific news, talk show clips, and some "Golden Age" clips including the disgraced "$64,000 Question." Like the play it launches, Evans' flashy video ultimately leaves the viewer wanting less ideas and more focus.

Oh. And that five-member front row? Once home and digging into the online production photos, we saw that they were in fact five of the six regular cast members. The lone non-attendee was Hancock, the one actor we have seen – and liked – before. The tradition of showing up to buck-up colleagues is a great part of theater. But, in this case, it was friendly fire killing with kindness.

Ms. Coleman did not appear in the reviewed performance.