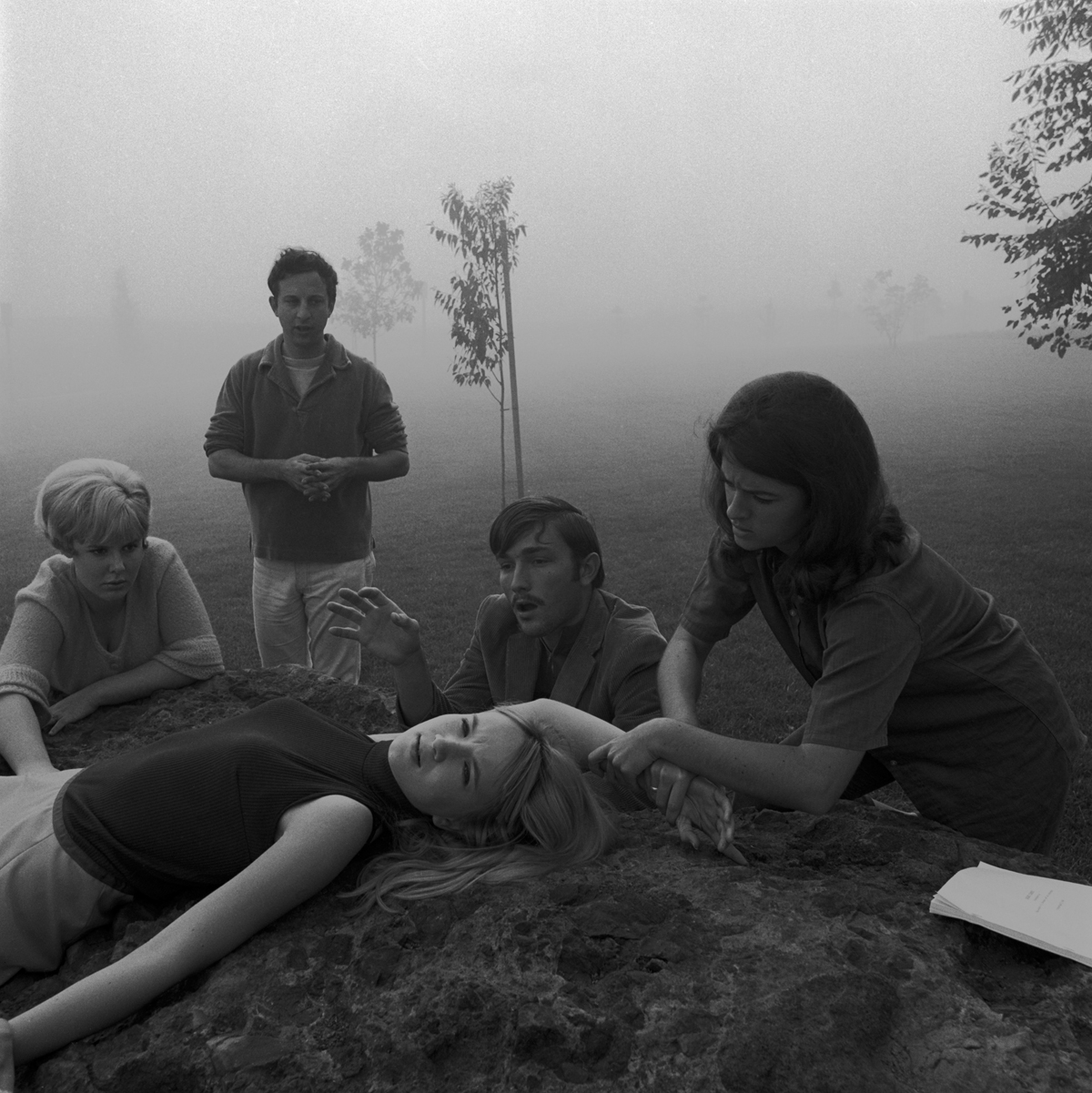 Walking into UC Irvine’s main library in 2008, I stopped before a poster bearing a remarkable photograph. The rich-toned black-and-white image showed a group of ‘60s vintage actors in an ethereal outdoor rehearsal under the watchful eye of a young Robert Cohen, who was then UCI’s Claire Trevor Professor of Drama and the subject of Stage to Stage, a retrospective of his theatrical work. It was the photo credit that caused me to shake my head in wonder: Ansel Adams. Having known Robert for years, I shot off a quick email to ask for the story.

It was winter 1967, wrote back Robert, who retired from UCI in 2015. Ansel had been commissioned to do a book of photographs of all nine University of California campuses, three of which (Irvine, Santa Cruz and San Diego) had begun operations the year before. Irvine was one of the first campuses he went to, probably because it was small and easy to get a handle on. All five of the original buildings, arranged in a semi-circle, had been designed by the architect William Pereira and what is now Aldrich Park was basically rocks, paths and saplings. Not exactly the sort of subject matter for which Ansel was already famous.

He had asked to begin his shoot with the Fine Arts (as our school was then named), and a request for a volunteer from the arts faculty (then only about eight or nine members) had been submitted. At the time, photography was not considered a Fine Art at our school. As my then-wife was a photographer, and I was a longtime lover of Yosemite National Park, I was well aware of Ansel’s work and considered him and Edward Weston geniuses of the art. So, I invited him to shoot my rehearsal of Oedipus Tyrannos which, on the following day, was being held on a rock outcropping in the center of the campus (now Aldrich) park.

This was the ‘60s, of course, which was the heyday of experimental theater, and my Oedipus was intended as a revolutionary production. Irvine was considered, at the time, a revolutionary campus - filled with experimental educational policies such as pass/fail grading on request, credit by examination for most courses, and a commitment to doing everything differently than it was done at parent campuses Berkeley and UCLA. I had therefore created, that season, a "Students Repertory Theatre" company that rehearsed and performed over two continuous academic quarters, mounting five productions with about 20 actors. Oedipus was our opener. Greek-language rituals, including chanting, keening, and dancing, were part of the play’s opening scene, which we rehearsed in the middle of the campus park. Campus police had been called in the day before by officials alarmed that a "religious cult" had taken up residence in the center of the campus. Ansel, naturally, was fascinated with this project.

He shot for about three hours. It was a foggy day, which I regretted but he didn’t. He was enthusiastic about the work we were doing, asked tons of questions, delighted in our Greek chanting and improvised dancing. He had a large format camera and shot sparingly, but each of the images that I eventually saw was superb. He had no assistant, and I don’t recall that he used any light reflectors or other paraphernalia now common on such shoots. It also turned out that he was a theater buff, very active in his community theater in Carmel, where he lived at the time, and extremely keen on avant-garde theater, which is how we classed ourselves. So, we became friends in the process.

After he finished, we went out for coffee and he asked if I would accompany him on the rest of the shoot, as he didn’t know anyone on the campus. And so, I spent each morning with him for the ensuing week. We corresponded for a couple years, but never saw each other again. It was an unforgettable week with an extraordinary man.