THE CONSTANT WIFE by W. Somerset Maugham | The Old Globe
THE STUDIO by Christopher D'Amboise | South Coast Repertory
UBU ROI by Alfred Jarry | A Noise Within 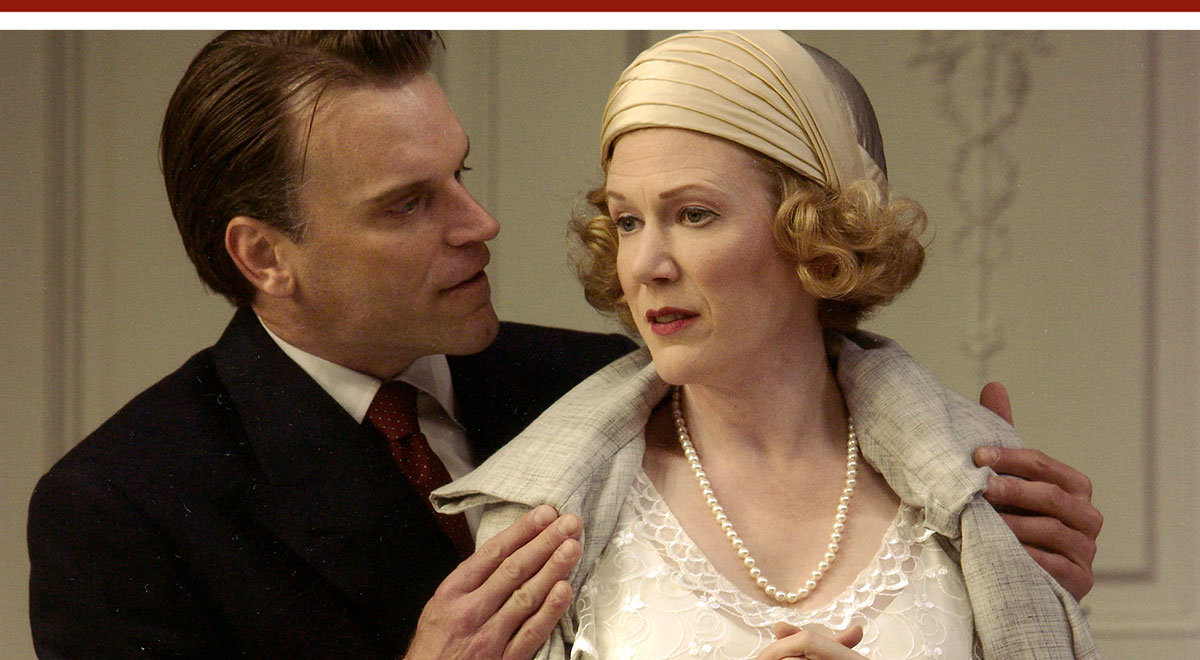 Eighty years after its writing, W. Somerset Maugham's The Constant Wife reminds us that one constant in life is change. But it also shows how a clever, deftly executed play may survive decades of change with its relevance intact. That is because, in Seret Scott's Old Globe staging (through May 7), this 1927 "attaboy" for empowering women depreciated by wedlock, promotes mental fidelity before marital.

An immaculate physical production by Ralph Funicello, Lewis Brown, and Chris Parry transports audiences to a time of now-outdated social mores. But those mores merely marked the perimeter of society's playing field. People then as now are always pushing these fences further out. What gives Constant its constancy is that playwrights like Maugham ignore the shifts in convention and concentrate on matters of the heart.

Constant's central Constance, as played without flash or vengeance by a perfect Henny Russell, sees a bigger picture than the others do. This insight makes her a touchstone for those of us looking in from the future, but it also leads to a life in limbo. She had opted for marriage to a man who was not devoted to her. Intuitively she knew this would give her more freedom. Attractive but not glamorous, she enjoys a financially secure lifestyle if not a romantic one, believing she cannot have both. She is prepared to overlook the dalliances of her husband (an excellent Wynn Harmon) as part of that freedom until proof of his philandering lands in their crowded living room. Without showing her hand, she engages the mind that has been idling, and begins a process that will eventually give her the upper hand, and with that a fair shake.

Maugham's script does at times spin its wheels while chasing its trunk. After all, there is not much going on here. Certainly with a lesser cast playing it as farce, it would be a long evening indeed. Kandis Chappell is Constance's mother, Mrs. Culver, an independent-thinking if not independent step in the evolution of Constance. Actors Heidi Fecht, J. Paul Boehmer, and Amanda Naughton, all flesh out their fairly one-dimensional, utilitarian characters with as much character as possible. Naughton even favors us with a beautifully rendered song to open Act II.

The decade in which The Constant Wife debuted began with two sobering changes in America. In 1920 it became a crime to drink alcohol and to prohibit women from voting. In Britain, where the play is set, although women began gaining voting rights in the 19th Century, the final restrictions would not come until the year after the play opened. Maugham was finishing his 10-year marriage as he finished this play. He divorced his wife the year the play premiered. He would not remarry, but continue the 30-year relationship with Gerald Haxton, with whom the bisexual Maugham had begun a love affair during WWI. 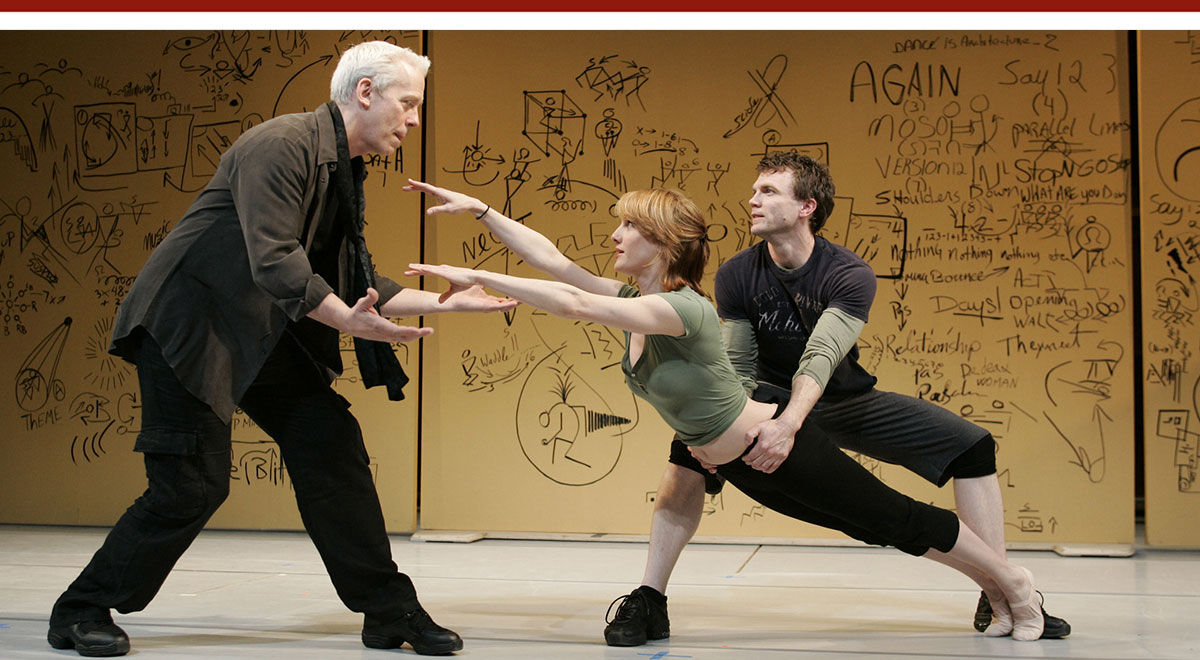 "Suspension" is the key to The Studio: The show's dancers must suspend themselves in gravity-defying movement while their characters suspend doubts about their choreographer's sanity and the audience suspends disbelief to better sidestep the storytelling holes. However, if writer-director-choreographer Christopher d'Amboise, who along with his father Jacques and sister Charlotte are part of America's ballet and dance pantheon, says this effectively unlocks the creative crucible of choreography, then we probably need to shut up and say "Ahhhh!"

For its part, South Coast Repertory has given díAmboise a handsome world premiere (on the Segerstrom Stage through May 7) and a cast capable of addressing the challenges of this play about dance. If the creative process in dance is one of grueling, tedious work occasionally broken by moments of exhilarating breakthroughs, then The Studio succeeds in capturing that feeling. It also underscores the art form's complex-inducing obsession with the body. Those who think the world fixates on appearance will sympathize with people who work where the walls have mirrors. There is no escape from self-scrutiny. Furthermore, in terms of prospects for career longevity, professional dance makes professional sports look a like bastion of job security.

Terrance Mann plays a reputed genius choreographer groping to reactivate a legend on its way to becoming a footnote. Mann manages to make as much sense as possible of Emil, who has enough anti-social quirks to fill a manual for "eccentric artist bahavior." He will stand catatonic for days while his dancers wait for instructions. He will sit fully clothed in his tub, then pop up to scrawl choreographic notations across his living room walls. Once, he famously pulled the plug on months of painstaking work when at the last moment he refused to raise the curtain on a major dance premiere. For some reason, d'Amboise has made this representative of the creative process both a brute and a fraud. The Pittsburgh-born Emil long ago adopted a European accent and demeanor to appear more sophisticated. He also offers the homily that in dance, the "music is the ley." However, he seems to choreograph without regard to the music.

What this may mean is that, ultimately, The Studio is about the process and not the people. If so, d'Amboise shows a process more futile than functional. Nancy Lemenager and John Todd play the veteran dancers who have signed on to help Emil create. They are passing out of their prime, and so all the more dedicated to participate in the dream of making dance history as the originators of a major new piece.

At one point, Emil demonstrates for his accomplices his measure of success: a simple exhaled "Aaaah." It is the satisfied sound of someone discovering a transcendent truth through the work of art he or she is viewing. In fairness, this insider's view of dance is working for audiences who, like the characters, are willing to overlook quirks to participate in a major new work.

written and directed by
CHRISTOPHER D'AMBOISE 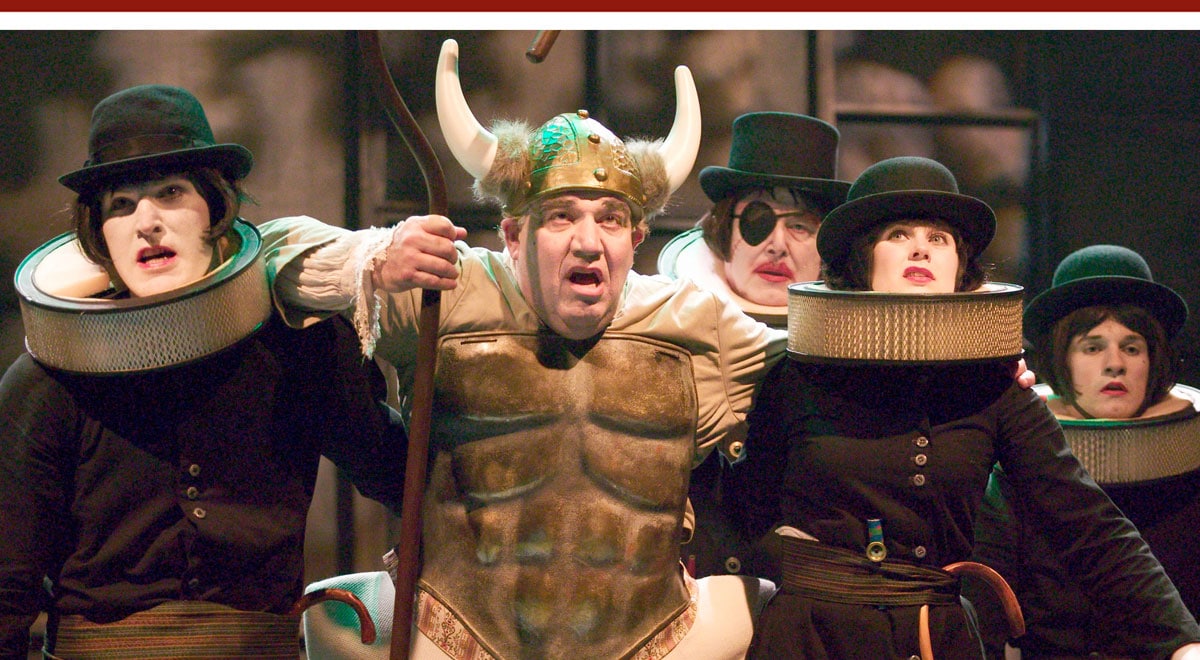 Throne for a loss

An energetic and impassioned production of Ubu Roi, Alfred Jarry's landmark lampoon of bourgeois foolishness, has transformed A Noise Within's Masonic Hall into an asylum auditorium and ticket-holders into visitors on a 90-minute pass. Director Julia Rodriguez-Elliott whips up a successful foam of theatrical madness that, like a carnival tumbling over a cliff, begins in descent and gets more riveting and dangerous as it picks up speed.

Enough to cause riots at its premiere 110 years ago, today Ubu would be no more arresting than a Beavis and Butthead episode were it not for exuberant productions like this one. Paris theatergoers were incensed in 1896 to be among the first to hear "Shit" said on stage, and said as the first word of a play. "Pshit" is virtually spat by the title character as he sits with his spouse astride matching crappers. Pa and Ma Ubu (Alan Blumenfeld and Deborah Strang) are cartoon grotesqueries with powdered faces, garish make-up, wild hair and outlandish padded costumes. She crochets, carps and craps as Ubu chews, spews and dumps. As he engages in this mindless cycle of feeding and relieving himself, we get a sinking feeling that Ubu's threatened military movement will be just as circular and pointless, but at a cost of countless lives.

There's a drunken, don't-shoot-me quality to an overture composed and played by David O. He underscores the entire show and helps launch several musical numbers that pop up along the way. He is stationed at an upright piano between seating tiers, surrounded by various percussive aids from gong to trash can. Jarry's apologetic curtain speech back in 1896 blamed the fates for reducing what should have been a full orchestra to a piano player and a drummer. But the presence of O at the upright adds the perfect aura of Florimond Ronger, one of the influences on Jarry through a flamboyant theatrical genre called French opera bouffe.

As a young man in the mid-1800s Ronger played the organ in the Paris asylum where his mother managed the patients' clothes. To ease the inmates' dreary lives, he wrote musical plays for them to perform. Word spread to theater managers and the asylum became a theatrical hotspot until Ronger was offered the job of conductor for the Theatre du Palais-Royal. Not crazy himself, he accepted.

Rodriguez-Elliott seems to have tapped into the spirit of Jarry, Ronger (who changed his name to Herve) and even Bob Fosse, for a number of decadent Cabaret-type numbers she choreographed (with occasional assistance from Jameson Jones).

Driving the insanity like a locomotive are Blumenfeld and Strang. But the entire cast is fired with dementia. On only one occasion -- during Ubu's purging of prisoners -- did the proceedings change from major to minor. But Rodriguez-Elliott was just as quickly into a new and engaging staging idea for the next scene. Among the cast members who shine are Mitchell Edmonds, who is regal as Wenceslas and Jill Hill as his queen, who somehow stays appealing despite a kisser-full of "stalac-teeth." Stephen Rothman as Macnure and Shaun Taylor-Corbett as Boggerlas also help keep the thin plot riveting. Also, nice to see Suzanne Jamieson (Maggie Smurt in Amy Freed's Safe in Hell at SCR) get a chance to show off her singing -- and kazooing.

With her designers feeding off the fun-house spirit, Rodriguez-Elliott has created a show that pays respect to theater history as it gives current theatergoers their money's worth of in-your-face excitement.