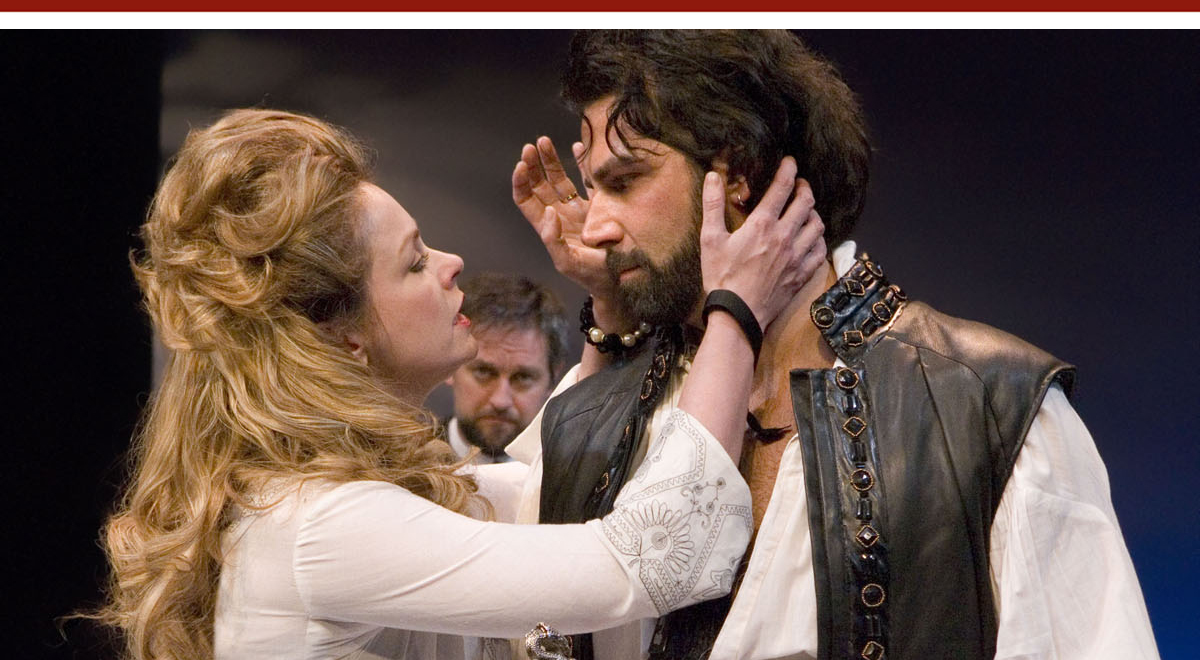 Molière is still engaging enough that his most popular plays – from Tartuffe to TheMiser to The Misanthrope – are likely always in production somewhere. However,screechingly unfunny, overwrought misinterpretations that would set the oldplaywright spinning in his grave are common enough to keep him whirring like a lathe,24/7. All the more reason why Michael Michetti’s funny yet flinty-eyed appraisal ofDon Juan (at A Noise Within through May 24) is welcome cause for playwright andpatron to stop, sit up and take notice.  Assured performances by Elijah Alexander andJD Cullum make this the rare production that lets the writer breathe again through hiswords, while resisting the deadening effects of trying to over-enliven them.

Michetti uses Richard Nelson’s 1979 adaptation, from his own translation, of a play written while Molierewas struggling to get Tartuffe past the censors.  In fact, you can feel the thematic linkage with thatmasterwork, like a fork pointing to ‘The Spiritual Birth of Tartuffe,’ in the passage where Don Juan rants,"How many I know, who by this stratagem have decorously patched up the disorders of their youth, whomake themselves a buckler of the cloak of religion, and under that venerated dress are free to be the worstmen in the world."

Despite being written during one of Moliere’s greatest creative bursts, scholars have considered Don Juanthe weakest, and worst constructed, of his hypocrisy trilogy (with The School for Wives and Tartuffe).  Part of problem may have been his reliance on the public’s pre-existing familiarity with the story. The nameDon Juan was already well on its way to becoming a generic for Lothario when Molière adapted the 40-year-old Spanish cautionary tale.  Major and minor writers, in several European countries, had already writtenversions of this folk tale of a libertine who is sent to Hell by the stone statue of the man he killed.  Later, itwould fuel Mozart’s Don Giovani and the famous third act of Shaw’ Man and Superman among others.

But Moliere was under pressure to write fast and provide his troupe with much-needed work, and himselfwith the flashy, sassy role of Sganarelle, the critical servant who comments on his boss’s every excessivestep while scurrying around to avoid the stamp of his commanding boots.  Here, Michetti (in his second ANWassignment following the equally successful ‘As You Like It’ two years back) has the wonderful JD Cullumas Sganarelle.  Cullum, like Alexander, is making his ANW debut and, following Freddy Douglas’ assignmentas Hal in Henry IV, it’s a sign of movement in avery good direction indeed.

Alexander is a determined, unequivocal Don, bare-chested or blouse-draped, he commands the stagelooking like Cat Stevens on steroids. He is well-supported, with particular credit to the women Libby West,Sarah Green and Abby Craden, and to the elders Apollo Dukakis and Mitch Edmonds. It’s also another fineshowing for the versatile Stephen Rockwell.  And, once more, Kenneth R. Merckx sparks earnest fisticuffs. All of it takes place on Michetti’s own set design.

At least through May 24, Southern Californian theatergoers can honor the dead playwright, knowing he isresting in peace, and laughing with relief.

by MOLIERE
directed by MICHAEL MICHETTI

For its 15th season, Towne Street Theatre is reviving steve carter’s [sic] Nevi's Mountain Dew, as part of its Black Classics Series. It’s an appropriate choice. Not only is carter a living playwright (he’ll 80 in November 2009) worthy of the study, his play itself is about life, death and reviving those who become trapped in denial’s dead-end. Producing/Artistic Director Nancy Cheryll Davis directs the uneven, seven-member cast to what is ultimately a worthwhile production, thanks primarily to her two strongest cast members, Dan Martin and Michael Craig Patterson. 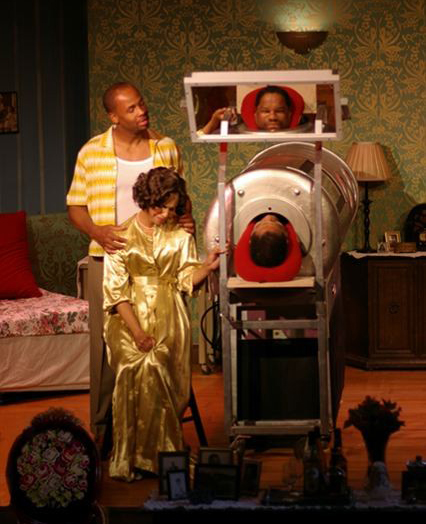 carter’s world is nicely confined to one home, a two-story building owned by Everelda (Veronica Thompson), in which her brother, Jared (Martin), is vegetating on an iron lung. Nathaniel Bellamy’s set satisfies the challenge of compressing two floors into a level-and-a-half of stage platforms, and allows Jared to remain both center stage and out of the playing area. The incapacitated Jared, once a vibrant and powerful Alpha male, is married to Billie (Nancy Renee), who, understandably, seeks other avenues for satisfying the challenge of being married to one so constricted. She is, however, conflicted, which produces the strange relationship with Boise McCanles (Shon Fuller) that drives the play’s arc. McCanles and his friend Lud Gaithers (Freddie DeGrate, alternating with Mark V. Jones) have arrived at the home to deliver the new television Billie has purchased for Jared’s birthday present. Rounding out the group are Everelda’s friend Zepora (Teressa Taylor) and her boyfriend, Ayton (Patterson).

A big appeal of Nevi’s is the absence of white people and the enjoyment of seeing a dramatic environment that is not reliant on racism for its backdrop. Written in the ‘80s and set in the ‘40s, that backdrop is understood. The subtle intra-racial distinctions of African-Americans by way of slavery and those who emigrated from the Caribbean (as carter’s own home was divided by an African-American father and Caribbean mother), are quietly wrought. The drugs that claim Ayton’s sons are the evil. The play is about life, loss and at what point our dedication to each becomes pointless.

Director Davis manages the tricky sightlines well, keeping the cast moving around the stationary iron lung (an impressive piece of scenery on a theater budget, credited to Will Lidderdale’s Set Shop. However, her decision to move a table-full of guests out in the dark during a touching Jared-Billie is unnecessary. Leaving them motionless not only does not pull focus, it adds to the sense that the married couple are always in the presence of others.

The other key role is that of Everelda. However, Thompson doesn’t seem to trust the material. Hers is performance too tempted to drift into mugging and caricature. The play would have been another animal entirely with an Everelda as grounded and nuanced as Martin and Patterson are in their roles. The other actors are good enough, with Taylor’s Zepora a standout among. Certainly a careful and lovingly rendered production of an interesting and rewarding play.

at the Stella Adler Theatre

To bear and bear not

Kate Robin’s What They Have, making its world premiere on South Coast Repertory’s larger stage as the leading edge of a seven-script new-play festival to reach full bloom May 2-4, is a slick, superbly acted slice of contemporary narcissism that, like the most attractively occupied couch at a cocktail party, may sizzle with ideas and insights, but leave an eavesdropper stunned by how inwardly obsessive we have become. 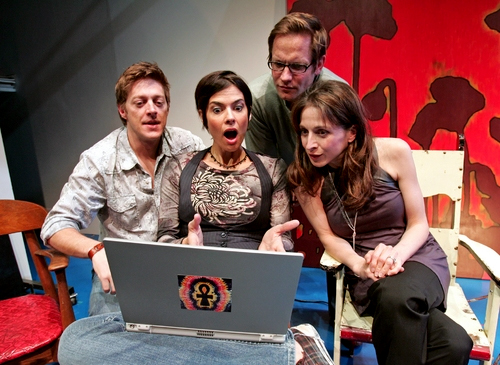 Among the ‘haves’ that Robin sets her characters pursuing, attaining, rejecting and ignoring are wealth, principles, fulfillment, hope and, with a pounding like we have not had since Lisa Loomer’s less engaging Expecting Isabel, children. While plays by women about the ‘halving’ part of ‘having children’ are overdue, what we have in What They Have feels, at its heart, like the boutique relationship with children that only we post-Pill generations could conceive. In the end, the couple that does bear a child, can’t bear the result, while the still-barren couple seem reborn just by holding the other’s bundle.

Suzanne (Nancy Bell) and Matt (Kevin Rahm), and Connie (Marin Hinkle) and Jonas (Matt Letscher), take their turns at pregnancy. While in the family way they proselytize like religious zealots, giddily unaware that whatever heights of insanity they pushed their parents to are now headed their way. Those put-upon, pre-Pill parents had children thrust on them simply for discovering sex. Most sold their freedom to pay punitive damages for sex’s ‘you break it, you buy it’ commandment. By contrast, as representatives of the educated contemporary middle-class, Robin's nesters have been allowed to approach it like window shoppers at a discount jeweler.

This is not to say that their lives do not have real tragedy, enough in fact to justify the self-pity that is drawn off as often as a frosty longneck. And, bless them, the actors under director Chris Fields’ steady hand give Robin’s realities full-bodied dimension. Still, the persistent sense that we are in a stifling cocoon may squelch what empathy begins to stir in the viewer.

Robin is wise and witty. Her navel-gazers reel off the chatter with as much animated invention as a modern Shaw might. However, he’d steer them towards issues of armaments, charity, God and the Life Force. Robin does take glancing swipes at big issues – the war, adoption as imperialism, artistic integrity – but none are given the weight that the Oprah-promoted ‘Secret’ or the ‘Big Brother’ reality tv show get. (One character calls ‘Big Brother’ “closer to Becket than anything I’ve seen maybe ever.”)

The ensemble has its work cut out for it making these folks as palatable as possible. Rahm, especially, must deliver a human no-growth zone in Matt. To his credit, he rides the script as written, not adding charisma to explain how Bell’s near-Pollyanna survies him. Letscher, as the other long-suffering dude, has more luck, given the added latitude his Jonas exhibits.

Ultimately, however, it’s the women’s play. Bell, whose subtle comic gifts are showcased beautifully in her final scenes, is also good as the dreamy Act I idealist who buys into the ‘Secret.’ She gets the biggest double-casting assignment and provides definition there while keeping it simple and effective. She is less successful with some of the heavy lifting when asked to go into the deep despair.

Hinkle, making her debut here after a couple appearances in readings, is one of the finer stage actresses working today. Her performance, offering challenging summits that she scales easily, may be undercut by Robin’s decision to make her the short-straw brunt of some couples humor in the opening scene. Connie’s willingness to acquiesce to her husband’s constant over-riding may be hormonal (given that she is blissfully pregnant), but given her professional reputation and successes, not to mention her husband’s ultimate assessment of her, it’s unlikely she is so consistently yielding.

Act One drops several one-liners we hope will broaden into plotlines. But, by intermission – introduced by one of Fields’ nicer touches, a beautifully drawn visual following Rahm’s sensitive performance of James Taylor’s ‘Lo and Behold’ – it’s pretty clear this is going to remain a ‘talkie.’ Fields uses the turntable, eerily evocative of the hamster-wheel cycling that the plot often gets stuck on, to advantage throughout this piece. Fields gets great work his company. Rather than trying to hide the play’s few double-casting requirements, he draws attention to them in a nice, and appreciated, twist.

Despite the stasis, this is an entertaining exposure to a talented writer. The ideas, while not particularly new, are well scoured. With the kind of all-star cast that made ‘Four Dogs and a Bone’ a sensation, a quartet of marquee actors could probably make this an off-Broadway must-see. It would solve the problem of audiences not having enough character to care for, by allowing them to overlay celebrities onto the four. Robin will need to hurry, however. Given the prevalence of cultural references like ‘Big Brother,’ the Bush administration, etc., what ‘What They Have’ may not have is shelf-life.