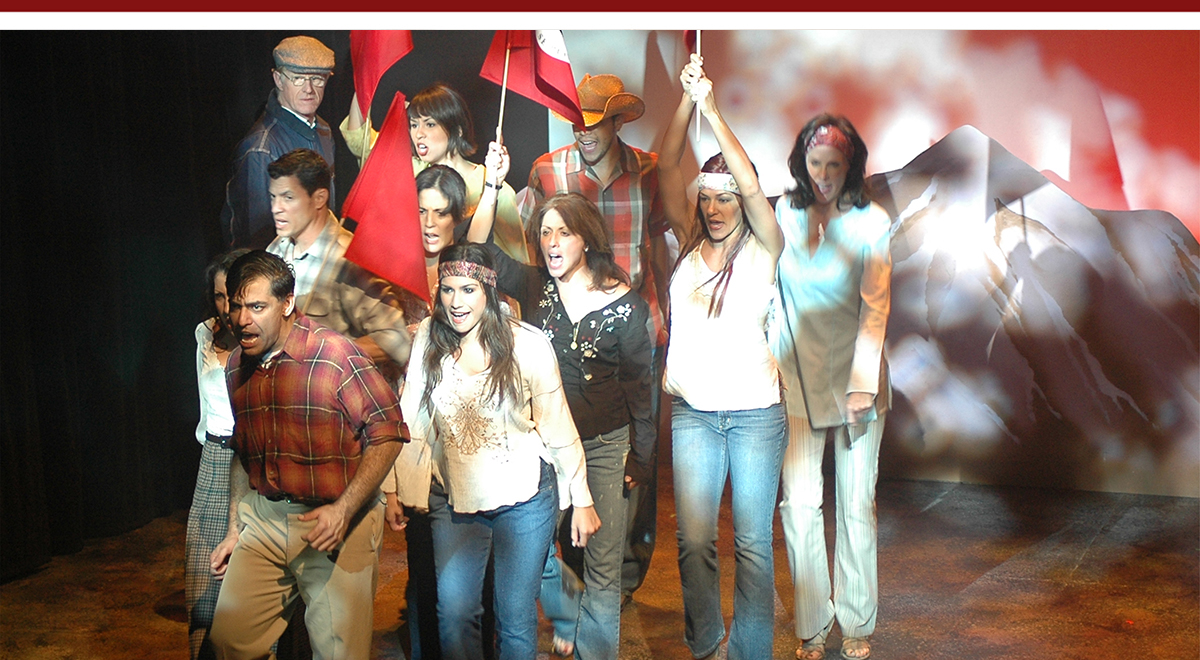 The NoHo Arts Center may have only one entrance, but there are many ways into Ed Begley Jr.’s Cesar & Ruben, a 2003 musical about Chavez and Salazar getting a superb revival through September 9. Whether one approaches it for the relevance of political theater or the escapism of musical theater, to enjoy great Latino theater or honest California history, or just see what Begley can do as a writer-director, Cesar & Ruben rewards on every level. Credit him with integrating history, fantasy, music, drama, humor, pathos, and English and Spanish with a perspective that, regardless of what you thought you were in for, you’ll leave grateful and optimistic.

With occasional use of a Magical Mystery Jukebox, Begley’s script weaves existing songs by singer-songwriters from Lalo Guerrero to David Gray and Ruben Blades to Sting into the story of Chavez’s life.  James Jermias' open set features a projection screen for documentary photos and clips (as well as subtitles for translated Spanish lyrics).  A recurring image supports an overarching railroad metaphor -- specifically the curious Tehachapi loop -- which recalls earlier forms of worker exploitation as it sets up the theme of turning around to see where we’ve been if we are to rise above and move beyond where we are.  With a steely honesty about California politics as backbone and a colorful theatricality for appeal, Cesar & Ruben looks back at, and elevates in stature, two of our state’s great crusaders.

The play takes place sometime after each man has died.  They meet in a way station represented by a simple bar and renew their acquaintance.  In order to move on, Chavez needs to review key points in his life and get a better sense of his contribution. Salazar, who has his own post-partum issues, has been sent to make sure Chavez takes an unflinching look.  Though it may sound like an overused device, Begley's writing keeps the dialogue spontaneous and Danny Bolero as Chavez and Mauricio Mendoza as Salazar keep it real.  Each song is chosen for lyrics that move the story ahead rather than popularity, and as each arrives there's a combined sense of the familiar and the totally original.  Seeing Cesar Chavez, for example, belt out a pop tune would seem to be enough to drive us screaming into the alley.  But the play's aesthetic, and Bolero's naturalness with his assignment, makes it not only passable but inspirational.

It is a production brimming with imagination and a talented cast as enthusiastic as it is earnest in its storytelling.  Bolero's detailed portrayal moves smoothly between the stoicism of a no-nonsense crusader and the warmth and humor of a prolific family man.  The handsome, be-suited Mendoza, differentiates Salazar from Chavez as a seasoned urban dweller who plays a different, but equally dangerous form of hardball in covering abuses by the metropolitan police.

In addition to the two lead actors, Crissy Guerrero brings her beautiful voice to the service of Helen Chavez and Gustavo Rex gives dimension to Naylor, the demeaning “boss man” who fills the show's all-bastards-in-one role.  Not a weak link in this cast, which is saying something, given how big it is.  Special recognition to Jack McGee, who shows particular range in moving from racist cop to thoughtful union organizer with schizophrenic conviction, and young Eli Vargas, who amazes with his solo singing as boy Cesar. Choreographer Frankie Anne also deserves extra credit for allowing a relatively small stage to comfortably sport big production numbers.

Among the forms of integration to be celebrated here, an important one is Begley's work as writer-director.  The practice, so welcome in independent film-making, will never be common in theater.  But when it works, as in this finely honed exhibition, it's great to see.

In program notes, Begley describes a chance meeting with Chavez in a diner.  That  led to a friendship that earned the actor a pallbearer position at the organizer’s 1993 funeral.  Here, with the help of Bolero’s textured performance, Begley lifts his friend up one more time, to look back and move him on.  If this show gets the audience it deserves, and he earns better understanding for the contribution both these important Californians made, he will have shown off more than his powers of theatrical integration.  He could help move down the tracks to social integration.  And that should be music to everyone's ears.  Let's hope his Magical Jukebox has it programmed at 2-B.