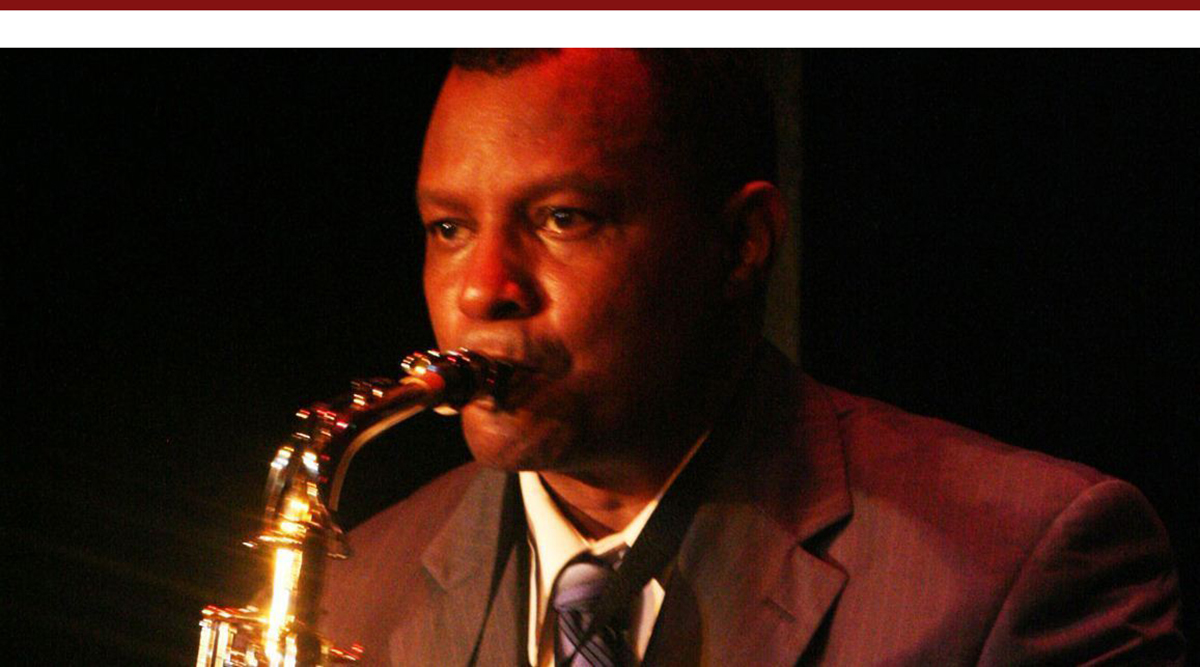 One of saxophone legend Charlie Parker's original compositions was "Now's The Time," which he wrote in 1945 at the age of 24. For music lovers, anytime is a time to celebrate Parker's life. His 34 years arguably etch a career seismograph more violently swinging than any other artist of the 20th Century, peaks of off-the-chart achievement as a player and composer broken by chasms of the deepest despair.

Parker, whose nickname was "Bird" or "Yardbird," is so significant that it's said jazz is divided into before Parker and after him. In his new bio-play, Bird Lives!, now at Chromolume's Attic Theater on Washington Blvd. (through September 21), playwright Willard Manus mixes jazz scholarship with passion for the man and the music. The devotion is in the details of the hour-plus one-man one-act directed by Tommy Hicks and starring Montae Russell in a careful, realistic performance.

sixty years after Bird's death officially ended the most creative period of the flashy bebop era, historians as well as dramatists are eager to focus public perception on the art and away from the emotional deterioration of lives lost to substance abuse. This clear-eyed portrait puts Parker's heroin habit, which stemmed from the prescribed morphine he took as a teenager after being injured in an automobile accident, in perspective without exploiting it for purposes of cheap pathos.

Hicks' straightforward direction helps Russell weave his portrait through Manus' scattered-scene structure. The history leaps back and forth through time and place. Separated by silent blackouts like cuts on an lp, they are ordered according to the artist's vision. Despite athe locations being listed in the program, integrating time and setting into the show through monologue or projections would help. The producers can certainly be forgiven the absence of projections due to expense, however.

It would help avoid confusion, which is promoted in the scenes dealing with Bird's Southern California visits and the year-long impact of the death of his daughter, Pree, on March 1, 1954. The play opens with Bird setting the time of his visit to a doctor by noting it was 11 years earlier in 1943. So we're somewhere around Pree's death, and a year from Bird's demise on March 12, 1955.

This choice by Manus of having Parker speak to other characters and not to the audience may be a limiting element. It would seem to be an uncut way to get into Parker's mind. Instead, when speaking with a Camarillo doctor, New York Police Lieutenant and Chan Berg, his final partner and Pree's mother, he has to repeat their questions so that we understand what he's saying what he's saying. The subliminal message that he repeats because he doesn't hear or understanding is unfortunate in portraying someone more intelligent than the rest.

It’s not the fault of Mr. Russell, who has to work harder to keep the drive going through sometimes seemingly random shifts. Nevertheless, he and Hicks make this a valuable experience for anyone who loves – or needs to appreciate – this man. Russell can be commended for his sax-syncing of Bird's solos, something rarely done this well in even the most celebrated film portrayals.

Beginning around Pree's death and going through the final year with flashbacks explained to the audience might afford a clearer retrospective artistically and add some directness that would allow Mr. Russell the freedom to, well, improvise a little. 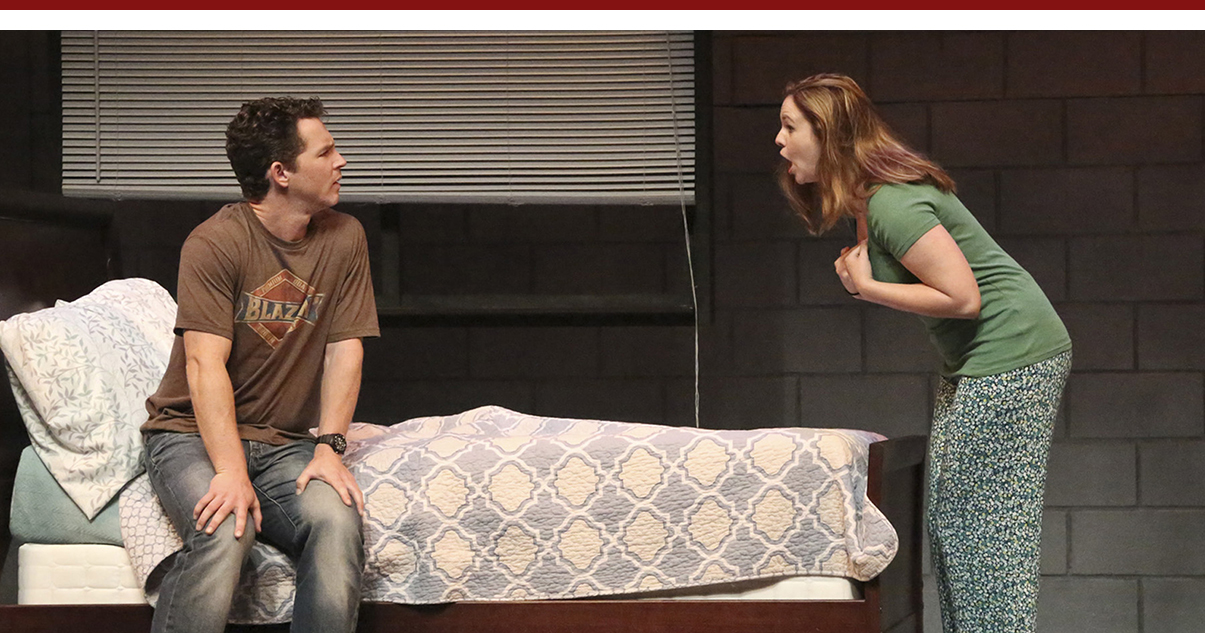 Compared to his last Geffen Playhouse production, Neil LaBute's Reasons to be Pretty sets us down in pretty familiar territory. The 2011 world premiere of The Break of Noon [REVIEW] swung for the headlines with a tale of mass school killings, sudden media celebrity, and the inherent peril of religion's flocking instinct. Reasons, written three years earlier, deals with more common, less clarion outrages.

That may have contributed to the success of its Off-Broadway premiere, which led to a three-month Broadway run a year later, and a 2013 sequel, Reasons to be Happy. Artistic Director Randall Arney's staging (through August 31), with an appealing cast of stage and screen veterans, should be just as successful here.

The healthy appreciation of beauty in nature and art turns harmful when it concerns the attractiveness of humans. What we like to believe is subject to the eye of the beholder, in fact objectifies the beheld and can severely damage the overlooked. As LaBute's play opens, warehouse worker Greg (Shawn Hatosy) is getting an earful from girlfriend Steph (Amber Tamblyn). Their lengthy relationship hangs by a conversation thread. The thread traces back from Steph to her friend Carly (Alicia Witt), a nightshift security guard at the warehouse who told her what Greg said about her to Kent (Nick Gehlfuss), his co-worker and Carly's husband: a new employee was "pretty" and Steph was comparatively "regular-looking."

That Greg is uninterested in the new employee, or anyone other than Steph, becomes clear in LaBute's story. It also seems clear that this is not the last straw in a problematic, distant, or distracted relationship. Nevertheless, Steph is clearly wounded. Ultimately, this isn't about her looks, which she was told as a child rank with the lowly "cute" on the cute-pretty-beautiful-glamourous scale. Instead, physical attraction has become the gauge by which she feels she is special in Greg's eyes. And, "regular-looking" does not compute. He has innocently stepped on that landmine and a belief she held self-evident has been blown away.

To help see Greg as generally decent, LaBute provides counterpoint in Kent. He is a lifetime subscriber to the beauty maxim and lucky to have in Carly someone he sees is irrefutably atop that pyramid. Though it's impossible not to step on landmines it addressing it, both Tamblyn and Witt are in fact beautiful women, which just helps underscore the absurd internal damage that is done to everyone.

Following the break between Greg and Steph, Kent's dependence on superficial attraction leads him to wander. When he boasts about his side conquest to Greg, he is assuming his friend has the same old-boy sexism he has. It will lead to another level of awakening for Greg, and confirm his general innocence in these matters.

While Arney and Tamblyn keep Steph sympathetic, she manages to inject plenty of comic hysteria into the role. Hatosy creates a quirky character for a performance that adds humor and surprise, but manages to maintain its rudder and ring true. It is an interesting touch for the play's protagonist.

Witt and Gehlfuss round out the foursome well. Witt is at first saddled with lines suggesting a dim bulb, which she has to evolve out of quickly. It's not clear why it's even in the script, but she soon balances Carly and we see that she is in fact "regular-thinking."

Arney's staging is patient with Labute's storytelling pace. While the structure here is a more standard dramatic arc than the playwright's signature style of building imperceptibly towards the final revelatory twist, there is still the first-act lack of hurry that may feel like wandering. Driving it is the gradual understanding of the even distribution of damage from our emphasis on appearance. Who is most hurt by it may depend on where one stand.

The production values are among the best in this space, which is saying something. The design team does superb work, from David Mickelsen's costumes and Daniel Ionazzi's lights, to Richard Woodbury's sound and music. Ned Mochel's lengthy fistfight – or "violence design" – still need some working into at this point in the run.

Takeshi Kata has given the production an outstanding set that creates an inner proscenium arch from the warehouse's main loading door. All the scenes – home, restaurants, break room – take place within the confines of the cinder-block facility. That unyielding environment silently supports LaBute's underlying point: this problem isn't going to resolve anytime soon.

REASONS TO
BE PRETTY