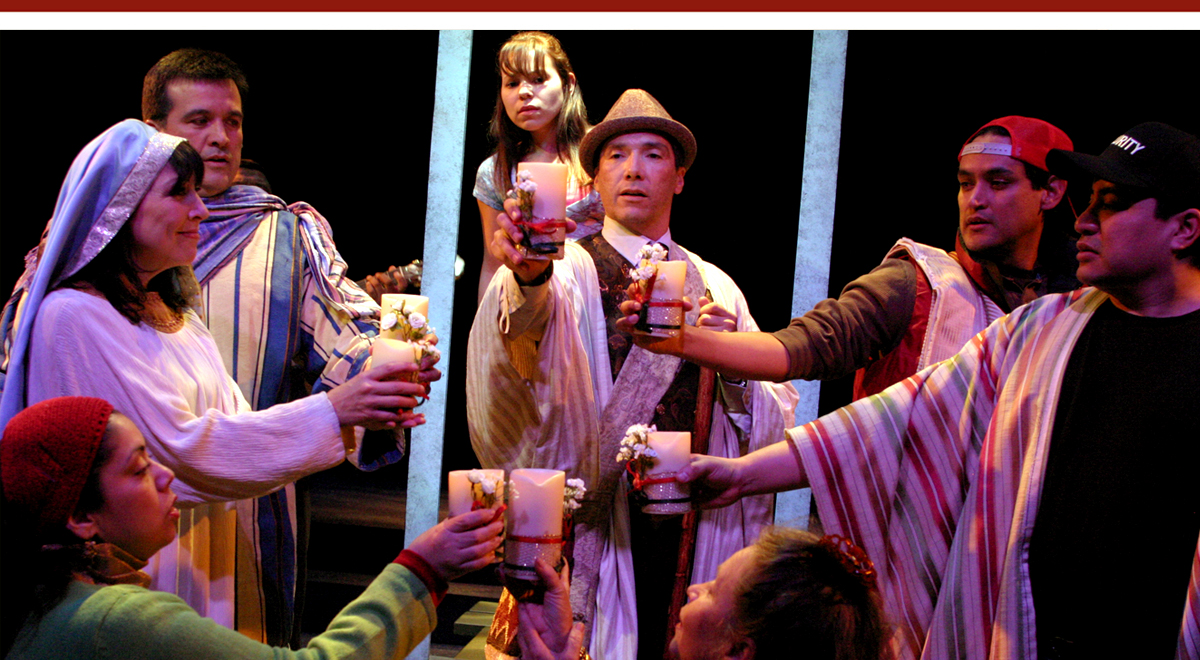 Candle in the wind

With the arrival of winter, non-profit theaters remind us that year-end donations will help meet their needs and maybe ours, as tax deductions. Many also make a second, indirect appeal by mounting Charles Dickens’ ubiquitous Christmas Carol. Tucked inside the cash-generating seasonal is the message that sharing our happiness with those who resist it most may bring them back from an abyss and renew us in the process.

Few contemporary plays have taken a serious shot at this aspect of the holidays, with a story that balances light-hearted fun with the darkest despair. One brave effort is La Posada Mágica, by Octavio Solis and composer Marcos Loya. The musical, which has played for 14 years at the Orange County theater that developed it, is now at the Odyssey Theatre (through December 24) in a Los Angeles premiere that represents a renewal for the play itself.

Beneath the colorful wrapping, Dickens’ 1843 story was another of his ongoing indictments of exploitation by the rich, suggesting this time that what drives the stuffing of greedy pockets is a much deeper emptiness. In La Posada Mágica, Solis and Loya are touching on more universal concerns that can be particularly painful at Christmas.

On Christmas Eve, Gracie (Tiffany Ellen Solano, alternating with Gloria Garayua) is a Southern California teenager still reeling from the loss of her little brother Ernesto to congenital illness earlier in the year. Her profound grief is made overwhelming by an additional loss. She believed God would spare the innocent child, and had seen herself as His partner in the act of salvation. She contributed vigils, prayers and the lighting of many candles, only to have the young life snuffed out along with her faith.

An enduring Latin tradition, around the world and here in the American Southwest, is the Christmas Eve posada. The “march” or “procession” is a reenactment by community members of Mary and Joseph’s journey. It begins at a church, moves to pre-arranged homes that refuse lodging to costumed “Mary,” “Joseph” and the posaderos, and ends back at the church, where a warm manger and celebration await.

Solis uses the posada to take the outside world to the angry girl who has shut herself off from it. As the play opens, Gracie’s parents (Crissy Guerrero and Richard Soto) are imploring her to come with them to church and be part of the festivities. Reluctantly, they leave her alone, but also leave a bag of old clothes they were going to donate, asking her to the give them to the posada when it passes.

The audience has already met the posaderos. They open the show with a rousing sing-along led by Loya on guitar and guitarrón master Lorenzo Martinez, veterans of every production. The posada is led by Horacio (Benito Martinez or Luis Zambrano). He is assisted by Refugio (Sol Castillo or Dan Pacheco), a rock'n'roll wannabe. The others are two local businesswomen (Denise Blasor and VIVIS or Carla Jimenez), the high school security guard (Richard Azurdia or Kevin Sifuentes), and Josecruz and Mariluz, who play the expectant parents (Soto and Guerrero again, or Edward Padilla and Erica Ortega).

When the merry band knocks on Gracie's door, she opens it just long enough to toss out the bag. When they insist on lighting a candle for her, her anger at the futility of her candle-lighting for Ernesto is unleashed and the shaken marchers move along. In the heat of her fury Gracie decides to show the posada what she means. She will catch up with them, secretly blow out each of their candles, and pull them into the darkness of her enveloping grief.

From there, the journey will veer in unexpected directions, from the comic to the supernatural to the frightening, before a magic takes over and gets us home. Director Diane Rodriguez, who worked on several previous productions of La Posada Mágica returns to the fold and, with less resources, allows more focus on the people and Solis’ many allegorical touches. The other irony that emerges is that a play so steeped in Christian symbolism is simply about people.

This is a fine cast, with special nods to both Solano and Castillo, who give the teenagers the youthfulness and depth they require. The production is largely made up of veterans who, having shared so many holidays together, wanted to keep their Posada Mágica alive. It is testament to the play, theater people in general, and the environment created for them at South Coast Repertory, the theater that commissioned and premiered it, that, led by Blasor and Guerrero, they did it. SCR helped with a year-end gift of many key props and costumes.

That the play is now the same age as Gracie seems the good time for it to finally find a home in the City of Angels.

For full disclosure, the reviewer was publicist for this play for its first ten annual productions.

Watch the Theatertimes' trailer. and a brief interview with Composer Marcos Loya.