Neil LaBute has found another way to make us squirm. In The Break of Noon, at the Geffen Playhouse (through March 6), the playwright continues to refine his chilling brand of portraiture, rendering characters whose ability to hide horrible flaws gradually erodes before our eyes. LaBute's characters drop their masks unintentionally, but often in ways that require us to remain understanding while we recoil at what is revealed.

This isn't a pointless exercise in manipulation. LaBute applies his technique to important issues. In the brutally titled Fat Pig, also staged at the Geffen under the firm hand of Noon director Jo Bonney, he shows the destructiveness of the social stigma against people who are overweight. Last season's Wrecks, a contemporary riff on the literary devices within Oedipus, revealed the central character's blindness to an acceptance of incest.

In Noon, LaBute wades past several potent issues – the psychology of "going postal," survivor guilt, the fight for integrity after the flash of sudden celebrity, and the crassness of profiting from others' tragedy – before settling in on his topic: the nature of religious zeal and proselytizing. Though it will be misinterpreted, this is not about religion, but about delusion. He is not saying religion is delusion, but that a delusional person can find a home there.

Maintaining all these gray areas requires a special lead performance, and LaBute and Bonney have their man in Kevin Anderson. Anderson resists histrionics, easy answers and appeals for sympathy, keeping his John Smith an enigma – to himself and us. He is abetted by the fine ensemble of Tracy Chimo, Catherine Dent and John Earl Jelks. Each plays two characters in the six two-hand scenes strung between the monologues that open and end the 90-minute intermission-less drama.

There is a vaguely dreamlike aspect to Noon, which takes its name from the time of the shooting. There's the nonsensical title, the generically named central character, and the similarity of the women's names – Ginger, Gigi, Jesse, Jill, Jenny. The men played by Jelks – a lawyer and a detective – do not have names. It's as if the Smith character hurried to put together this story, glossing over the details.

The story begins with Smith recalling a horrific 37-victim killing spree waged by Juan Diaz, a co-worker whom Smith had recently fired. According to Smith's version of the story, after exterminating every other employee, Diaz stands before the man who terminated him, points the weapon at him, and tells him to be calm. Then the siege mysteriously ends. Diaz is found dead, Smith survives, and with him a phone-photo he took of the carnage.

Smith is next seen wrestling with the opportunity to cash in on the photo, by selling it to the tabloids for a life-changing fortune. Diaz' purported words of reassurance gradually become the voice of God as Smith retells the story, and the ability to profit from the tragedy is rationalized as part of God's plan to fund Smith's self-appointed mission to spread a message that God cares and has a plan for us.

Smith quickly becomes a high-visibility celebrity, understandable in the aftermath of the Gabrielle Giffords shooting, where a student with CPR training could be recognized at the State of the Union for helping to save the Congresswoman. One of Smith's media encounters is with a fiery talk show host (Chimo), vaguely reminiscent of Nancy Grace, who challenges Smith's story, suggesting that he is out to capitalize on the unfortunate incident – and missing the point that this is precisely what she does five nights a week.

His path is not a straight line. His first inclination is to make amends with his ex-wife (Dent), but his behavior doesn't indicate a change to her. He will make his way through these encounters, never revealing more about himself that a fluffy ambition to do good. The actual good deeds are missing. He tries to reconnect with a former mistress (Dent), and minister to a conflicted prostitute (Chimo) with ties back to his co-workers. His advice to the prostitute, tellingly, amounts to helping her remove her mask and reveal her true self.

Smith holds his own truths tightly to the vest. What we hear is what serves his "mission." Whether one believes him or doubts him may depend on how protective they are of Providence. LaBute likes the ambiguities, and ambiguity is probably as true a portrait of our spiritual leaders as we should tolerate. The Break of Noon is the fourth of LaBute's plays to be staged by the Geffen, and the first to reach its main stage. One hopes audiences take the ride in the spirit intended. It may seem to end up where it started, but these plays work in mysterious ways.

THE BREAK OF NOON 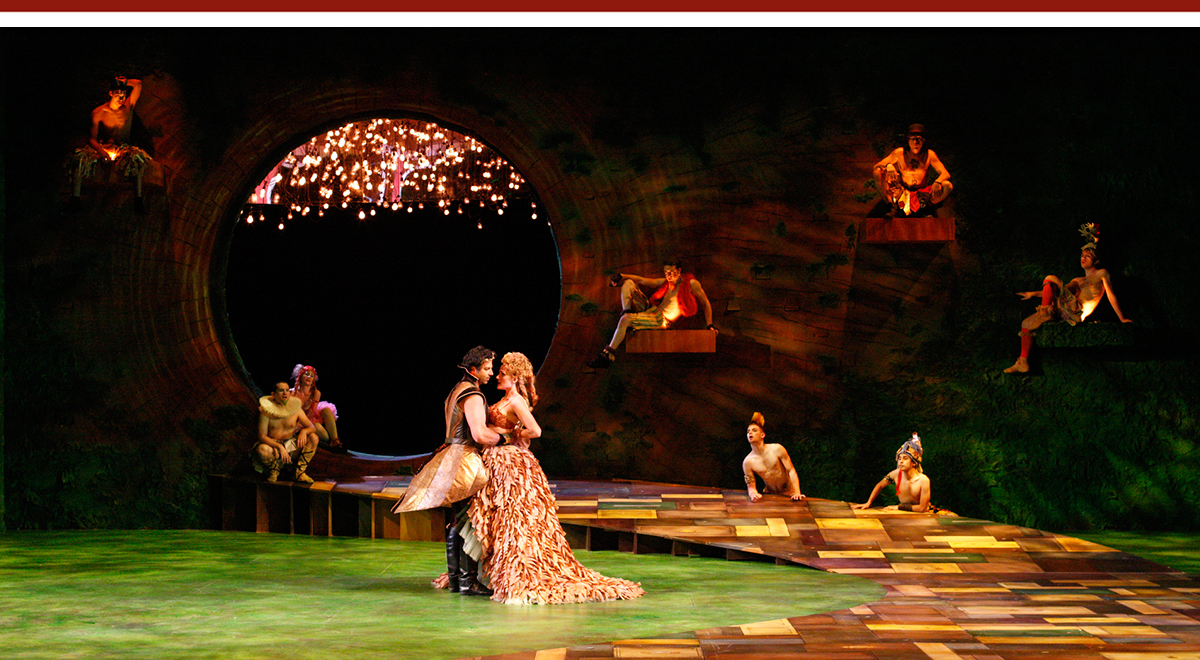 In a woodland, Shakespeare’s Midsummer Night’s Dream brings together foolish mortals, fallible faeries, and a hapless troupe of amateur actors rehearsing a play for the Duke of Athen's wedding. Though only the "actors" are labeled amateurs, in Mark Rucker's earthy yet light-hearted South Coast Repertory staging (through February 20), we clearly get Shakespeare's drift, that we are all amateurs at love.

In his fourth Shakespeare and the theater's third Midsummer, Rucker recalls his classic stagings of The Taming of the Shrew (1996) and Much Ado About Nothing (2001), which were given a playful, mid-Century American attitude. Nephelie Andonyadis' Athenian apparel is vaguely retro, and the original music by John Ballinger and Ken Roht, used primarily to funkify the forest, samples old school r&b, rap and hip hop. There is also a sense of freedom to the acting choices, echoing the play's central theme that society will stifle if we don't follow our hearts.

That this entertaining staging fails to reach those earlier heights has more to do with differences in play structure. The previous plots were anchored by battling romantic leads and Rucker benefited from two commanding actors at their centers – Marco Barricelli and Douglas Sills, respectively, and strong women in Cindy Katz and Nike Doukas. Like the less successful Two Gentlemen of Verona (2003), Midsummer divvies the story between several couples, thus dividing the fireworks between a half-dozen actors. This requires a solid director's concept and a deeper cast to fully execute it. Still, this Midsummer has enough flashes of ingenuity, both in the physical production and performances, to make this a critic-pleaser and an audience builder.

As the play's couples wrestle the conflicting impulses of head and heart, the larger conflict between man and nature – in the forms of love and law – battle in the background. The only pair in equilibrium throughout are the afianced Duke Theseus (Elijah Alexander) and his Hippolyta (Susannah Schulman), whose wedding ceremony will conclude the play's once-around-the-sun timeframe.

It begins when a prominent citizen (William Francis McGuire) petitions the Duke to force his daughter, Hermia (Kathleen Early), to marry the suitor he, by law, has chosen. She wants Lysander (Nick Gabriel), instead of the equally infatuated Demetrius (Tobie Windham) picked by her parent. Hermia and Lysander escape into nearby woods, but not before she tells her plan to Helena (Dana Green), whose unrequited love of Demetrius causes her to alert him. He launches in pursuit, with Hermia hot on his trail.

The woods symbolize the invisible, uncontrollable realm of the heart, best accessed in pre-Freudian terms through dreams. Here, beyond civil law, affairs are overseen by the faeries, led by Oberon and Titania (Alexander and Schulman, again). Ironically, they are in the thick of a marital spat. After observing the four Athenians, Oberon becomes sympathetic with Helena's plight and sends his assistant, Puck (Rob Campbell), for a special flower. Its juice, dropped onto sleeping eyes, will cause Demetrius to wake with love for the first one he sees: Helena. He also pockets a few petals to use on Titania, planning to position some crude creature for her waking eyes to behold.

Nearby, a half-dozen Athenian craftsmen are rehearsing their play. Director Peter Quince (Hal Landon Jr.) is trying to rein in a self-important Nick Bottom (Patrick Kerr), who would happily hog all parts, leaving nothing for the others (Richard Doyle, John-David Keller, Michael Manuel, and McGuire). Seeking a beast to use in Oberon's ruse, the watchful Puck decides that Bottom, already behaving like an ass, would be easy to transform the rest of the way.

According to plan, Titania wakes to fall for the braying Bottom. But things don't go so smoothly with the four Athenian. Puck mistakenly douses Lysander, who is then awakened by Hermia. When he tries to correct things by anointing Demetrius, Hermia becomes suspicious. After all, moments ago, the love train was being pulled by Helena. Now the train is mysteriously reversed, with the caboose takiing the lead.

After Oberon has had enough, he applies an antidote all around and the Athenian men accept the (natural?) order of the women's original affections before joining the wedding ceremony, where the myth of Pyramus and Thisbe is presented. Pyramus not only gives Midsummer a rowsing comic finalé, with Kerr and company make the most of, Shakespeare also uses it as cautionary counterbalance. Like Romeo and Juliet, Pyramus and Thisbe did not leave society to explore their passion, but tried to supress it in respect for authority, paying the ultimate price as a result.

Rucker's actors are all capable, with special appreciation earned by Gabriel, Green and Campbell, whose older, less puckish Puck is the production's big question mark. Eschewing the garden variety Goodfellows we're used to, Campbell and Rucker, though still sorting out what they have here, offer a kinetic sense of mystery that commands our attention. In black bowler and a loincloth made of men's ties, this Puck tics like a pensioned representative of Munchkinland's Lollipop Guild, with a whiff of Kubrick's Clockwork Orange.