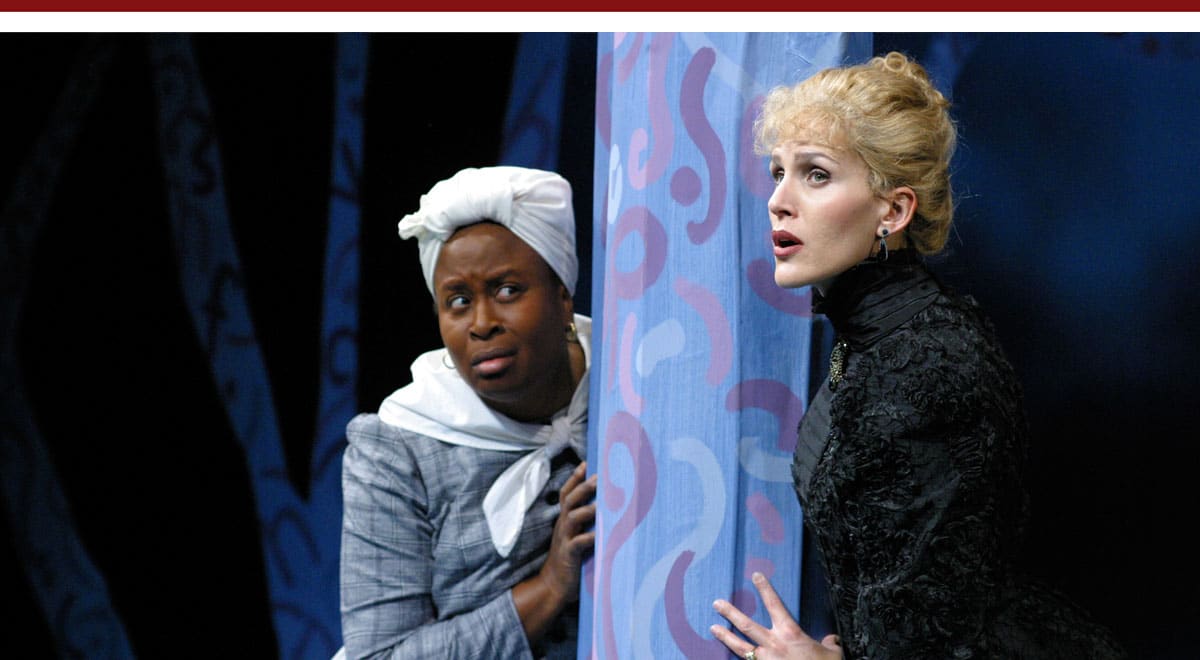 From page to stage

If anyone is obsessive enough about language to want to rescue the concept of "intelligent design" from its current abductors, there's a wonderful accomplice awaiting in Jeff Whitty's Further Adventures of Hedda Gabler, premiering on South Coast Repertory's Julianne Argyros Stage through January 29. Whitty, his collaborators and his characters celebrate creation and creativity while they examine it from inside and outside in a mad invention that is as fascinating as it is funny.

Unlike the proponents of non-evolving creation, who offer a future eternity, Whitty gives us a timeless theatrical heaven borne of imagination and sustained by appreciation. He populates it with characters as old as Greek drama and as contemporary as cleanser commercials. Everyone – from the oedipally complex
to the embarrassingly stereotypical – receives equal protection in this preserve of the collective subconscious. The only requirement for everlasting life is to be unforgettable: Out of mind, out of sight. Once Whitty has established his world and its natural laws, he mines them for hilarious results. Naturally, each character is trapped in the story-cycle that his or her creator – be it Henrik Ibsen or George Lucas – designed for them. But, in holding mirrors up to nature, things get reversed. Here the most forlorn characters have the longest shelf life; the suicidal are virtually immortal.

This may explain why the tragic Hedda seems to be as popular among her in-play peers as she is to her paying patrons. But assurances of a lengthy afterlife are little solice. Hedda's consciousness, previously strained to bursting back in Norway, can be raised only slightly here before melancholia (or a matinee) force her to once more temple her muzzle.

In the wiring of any intelligently designed creation, however, there must be a circuit breaker. Hedda eventually manages to break her own cycle of violence and sets off in search of change, accompanied by the oddest posse outside of Oz. Theirs is a world where, truly, in the beginning were the words. Consequently, seeking their source means finding the fiery imaginations where their identities were forged: the community's central heating system. As the trip proceeds, they question their lives, our tastes, and by their actions confirm the real necessity of fiction.

As one character says, "We keep their imaginations flexible and open to new and life-changing ideas! When we all die, the real world dies. We will not disappear because the real world does. That world will slow and stop because imagination has died."

The contribution of director Bill Rauch is enormous. He manages to keep acting and design feeling wildly anarchic as he delivers all the script's nuance and depth. Loosed of his Cornerstone, he is clearly on the Dan'l Sullivan trail to national prominence. A fine cast across the boards. As Hedda, the radiant Susannah Schulman cannot be dimmed – or slowed – by her Shigeru Yaji-original, mourning-for-my-life gown. A worthy creator for this new role, she gets to cover all the bases: passionate, despondent, and even a favorite moment of glee when she accepts a lift across a lake. The slyly comic Kimberly Scott, finding the soul inside the stereotype, gives Margaret Mitchell's Mammie raison d'etre indeed. Dan Butler performs similar miracles, skillfully riding that border between parody and empathy as a flamboyant character from The Boys in the Band who knows his time will likely be brief. On the other hand, it would appear that Mr. Whitty has created a handsome life insurance policy for all the characters in The Further Adventures of Hedda abler.

And, for the cause of intelligent design, once the script's printed I expect to leave copies in hotel nightstands ad infinitum.

Full disclosure: The Further Adventures of Hedda Gabler has in its cast and crew many friends of mine and is produced at my former professional home.

THE FURTHER ADVENTURES OF HEDDA GABLER 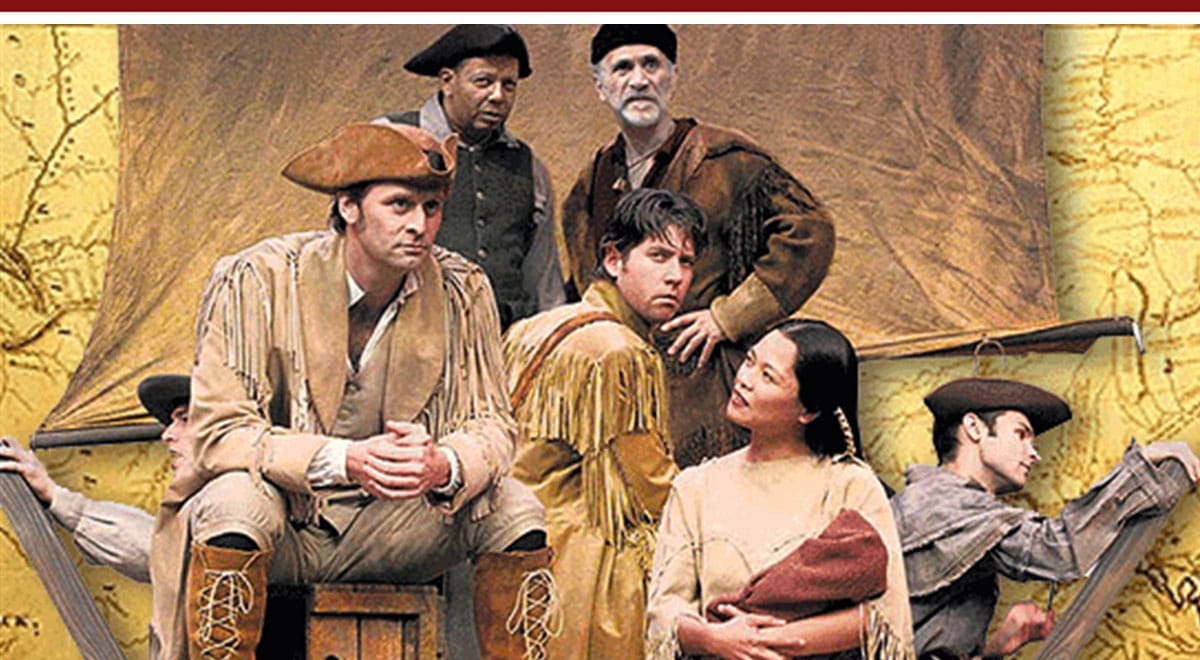 Robert Schenkkan's 'Lewis and Clark Reach the Euphrates' is welcome proof that under Michael Ritchie the Mark Taper Forum will continue to premiere plays that marry theater and politics to take a potato-peeler to America's thick skin of historic denial. But, while it has insight and imagination, it's a reminder that these inter-marriages have high risk of producing oafishness, or worse, imbecility.

This latest drama from the Pulitzer Prize-winning author of The Kentucky Cycle follows the famous expedition into parts unknown, sticking to the actual path until intermission. The act break, with the same frieze on either side, turns out to be a rabbit hole down which the earnest explorers are thrown for an express tour of 20th Century American imperialistic misadventure.

Although populated with historical figures, the play's style is impressionistic. It begins without a fourth wall. Hard facts and harder judgments about the personalities of these heroes are laid out as the Corps of Discovery proceeds north and west. Beginning with the Spanish-American War in Cuba, and proceeding to the Philippines, Vietnam and finally Iraq, Lewis and Clark fill their journals with the atrocities of Act II as they are physically and philosophically threatened by soulless agents of the same country they are helping to expand.

As the two explorers lead their party into the unknown, recording in their journals the reports they will deliver to the president, one insists, "We have a duty to bring back all the facts."

Schenkkan's journey of artistic discovery has a different duty. The writer of the play, as opposed to these "journalists," must cherry-pick facts that illuminate underlying truths as he sees them. And, he shares some nuggets, producing plenty of resonance along the way in links between Jeffersonian American and the current days of George II. Schenkkan employs ambiguity to keep the explorers in anachronistic limbo and the bemused contemporaries dismissive. When agents of the Great White Father patronize tribes ("Freedom and democracy are new to these people: We can't expect them to embrace them overnight."), whether Mandans or Sunnis, there's an echo behind the words of two centuries of bones crunching beneath the rolling out of American influence. Donald Rumsfeld – who, with this characterization and that in David Hare's Stuff Happens last year, has racked up more stage time than 98 percent of L.A.'s Equity membership – becomes the embodiment of American blind will. He ties up the story by focusing back on a report he will present to the President under the authorship of Lewis and Clark. It is in fact a report by agents of Ahmed Chalabi verifying the presence of weapons of mass destruction in Iraq.

But without a solid road map, the impressionism is unavoidably vague. Despite enjoying the experience and saluting its creators, we find that, ultimately, the show is better for the thoughts it sparks than the ideas fleshed out on stage; greater for the conversations it may trigger than for the dialogue it uses to do so. Despite the wobbling, the production is beautiful to behold thanks to director Gregory Boyd and his design team of Judith Dolan, Howell Binkley and especially Jeff Cowie and Marc I. Rosenthal.

LEWIS AND CLARK REACH THE EUPHRATES 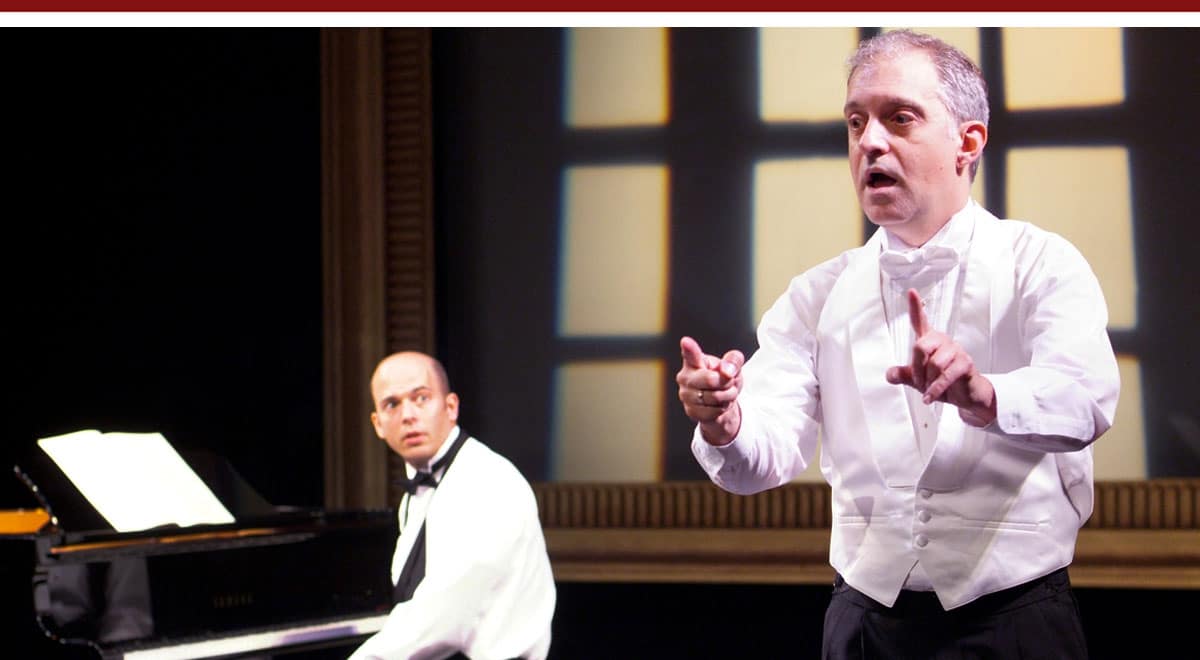 The playing within the play

Two Pianos, Four Hands, at the Laguna Playhouse through February 5, is an entertaining celebration of the life of pianists – from prodigy to professional – and the parents, teachers and students who goad or gall them along the way.

An added subtitle might be "Two Performers, Two Art Forms," as this show sets a high-stakes table of satisfying in both theater and music. Ted Dykstra and Richard Greenblatt created the show as a series of vignettes built around practicing or performing the piano. The lives of two pianists named Ted and Richard are fragmented along various paths they could take and life choices they might make. The show premiered in Toronto in 1996 with the Canadian-born creators on the benches. Since then, American actor-pianists Richard Carsey and Tom Frey have filled in for productions in Louisville, Hartford and beyond, polishing their performances without hint of weariness.

Anyone who has had a music lesson will relate to the early instructional scenes, while the rest will be able to see what they missed and learn something useful about music. For those currently trying to help their children become disciplined in music – or anything else – there's plenty of familiar and funny territory.

Carsey and Frey are amazingly apt at taking on the physical appearance of whatever realm they are in whether as walking sight-gags, sitting at the pianos like maestros, or inhabiting the stage with an actor's bearing.

Although the evening initially threatens Victor Borge Burlesque, and overstays the shouting-and-eye-rolling school of comedy during its time with the young students, it soon heads into more mature areas and better laughs. By the second act, the students are older and their music elders become hilarious translators of the real world. As men, our two characters are playing piano for higher stakes: The obsessions are more isolating and the self-doubt more debilitating as the world beyond the practice room gets colder. When an evaluator crushes the dreams of a gifted student caught sloughing off, we have the evening's most dramatic moment: leaving in its wake that coveted audience award – total, cough-free silence.

There's bittersweet humor in scenes of adults who make their living from the piano without making the concert circuit. A medley of the kind of pop staples employed by working pianists includes "Piano Man" and a member of Billy Joel's "regular crowd for a Saturday." It's a scene that provides comedy, empathy and good music as it honors the years of discipline behind the unsung heroes of noisy lounges and Nordstrom escalators. Similarly, we can laugh and twinge when, later in life, one of our protagonists becomes a teacher whose chronically late middle-aged pupil is just using the patient pianist as a bargain therapist.

Ultimately, however, the art of the performance, the production, and the pieces by Bach, Mozart, and others prevails above the pain. Carsey and Frey shake off the battles and doubts and re-don their tuxedo jackets as the lights are reset to concert cue. They launch into the first movement of Bach's "D Minor Concerto," saluting the music that inspires discipline in both practitioners and patrons. It's a final showcase for the dual-discipline cast; a cascading bouquet that stills the actors and lets the musicians have the final word. As a result, we finish the show without the closing cadence of dialogue and instead in a realm with a different measure of time.

HISTORY Originally produced in 1996 by Tarragon Theatre, Toronto in association with Talking Fingers Inc., Produced Off-Broadway, in London and throughout North America on its first tour by Mirvish Productions, Toronto. Produced by Marquis Entertainment