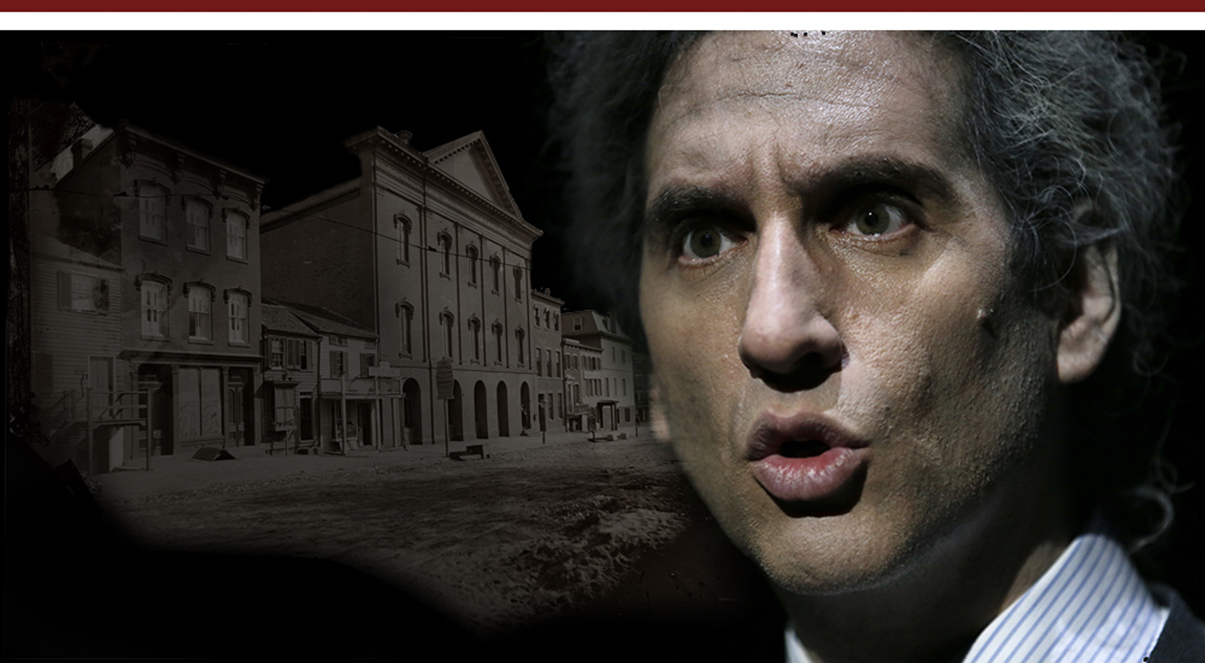 Spirits in the night

Hershey Felder has brought George Gershwin, Franz Liszt, Chopin, Beethoven, and Leonard Bernstein back to life in a successful series of piano-recital stage-biography hybrids. In Abe Lincoln's Piano, premiering in a short run at the Geffen Playhouse (through January 13), he steps out from behind the curtain of characterization to tell a story from personal experience. And it's a doozy.

Lincoln's Piano reflects a shift in show composition with Felder focusing more on dramatic storytelling and less on piano performance. Aside from a smattering of excerpts for illustration, mainly from Stephen Foster pieces of the period, he saves any extended concertizing for the end. But after an intermissionless 90 minutes, it dissipates the emotional impact his narrative has built. Still, it is but a minor diminishing of an engaging evening with the man behind the maestros.

Along the way, we do learn about the famous mahogany piano that graced Lincoln's White House. We hear how medium Belle Miller levitated it during a séance attended by the President and First Lady, and how Felder discovered it tucked away in a museum during a visit to Chicago. But the heart of the story is that night in April 1865, in Washington's Ford's Theatre when an actor assassinated the 16th President.

Felder had been invited to perform Gershwin's "Rhapsody in Blue" at Ford's Theatre. During a pre-show visit to get familiar with the house and piano, he was surprised when the facilities manager left him to lock up when he was finished. Alone in the landmark, well represented in the stage design by Felder and director Trevor Hay, he feels the immediacy of history. But there is something more that Felder allows: a sympathetic and respectful appreciation of the potential for spirit intervention.

He had introduced his story as an uncanny sequence of unrelated events that he had only understood when the last piece fell into place. The phenomenon of providence is something he acknowledges several times. It is part of the portrait of his mother, who emigrated from Hungary to Canada during the unrest of 1956, 12 years before his birth. Not only had she fostered his love of music and dedication to performance, she provided a special insight into appreciating America whose music she insisted always sounded full with hope and as fresh as if written that day. Her two favorite pieces were Stephen Foster's rapturous "Beautiful Dreamer" and Louis Moreau Gottshalk's bombastic "The Union."

The unseen hand of providence has a comic face, too. When Felder is a low-wage restaurant-bar pianist, a British ex-pat with a paranormal Pooka a la Elwood P. Dowd channels what he guarantees is career advice directly from Felder's mother, who died some years before of cancer at age 35.

The recreation of Lincoln's last night is very detailed, much of it quoted from the eyewitness account of Charles Leale, a 23-year-old surgeon who had attended the performance of Our American Cousin, according to his granddaughter, "not to see the play, but to study President Lincoln’s face." Instead, he would attend to Lincoln and be responsible for prolonging his final hours.

There is a real sense of this providential undercurrent moving the story along. As we proceed, unaware of what lies around the next turn, Felder grounds his quasi-mystical account with solid, objective reporting. He does have a weak spot for milking a moment, as when he describes Leale's decision to rest Lincolm's head in his lap or recites the entire Gettysburg Address. And, as mentioned, that final performance, which weaves together Gottshalk's "The Union" with &quotThe Battle Hymn of the Republic," undercuts what had been the strength of the piece. These are minor, forgivable infractions, borne of his obvious bond with subject and characters. Shortening them, however, might leave his audience more energy for the hearty ovation he deserves, and no doubt seeks. 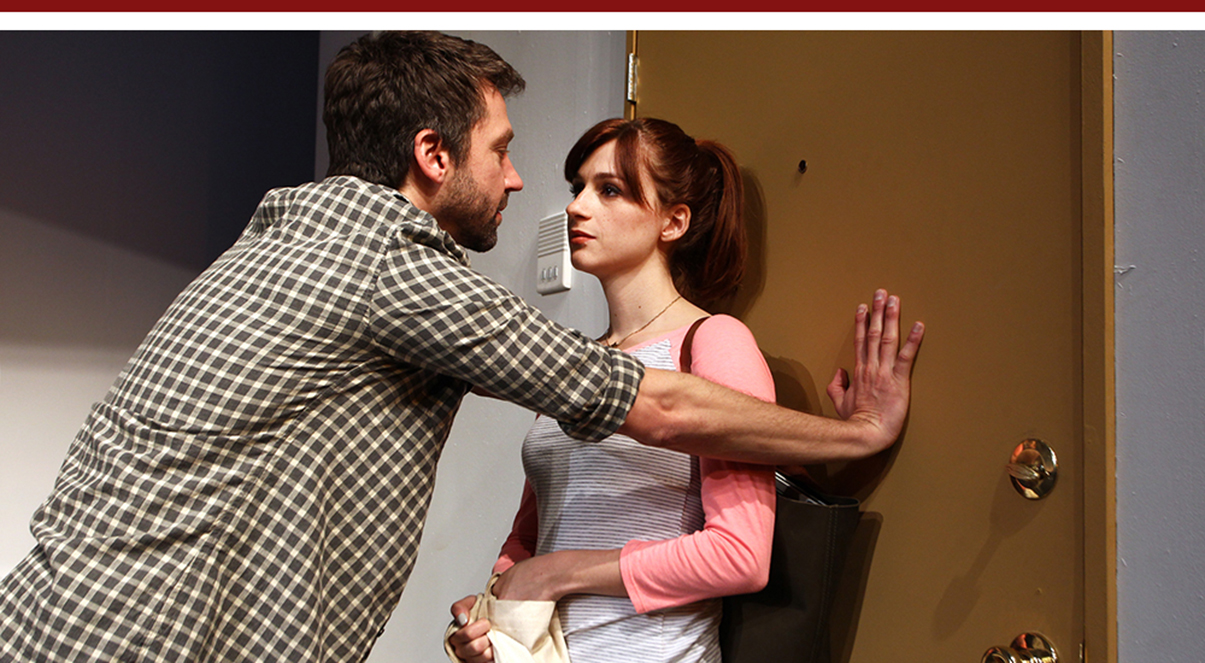 Love is the drug

With a title as simple and straightforward as a Dick and Jane primer, Zoe Kazan's Trudy and Max in Love is a somber romantic comedy with a lesson in relationship fundamentals from the dark corner of the love triangle. Its world premiere, directed by Lila Neugebauer, continues at South Coast Repertory through January 26.

The play is contemporary. The main characters use a communal writers' room in Manhattan to crank out their next novel, GQ article, or blog post. The energy and insecurity of creative people in their twenties and thirties fuels their exchanges with currency and sarcasm. But Kazan's choice of throwback names like Trudy and Max, and a passing scenic reference to a song from My Fair Lady, suggest that she is taking a long view of love: Her characters' conflicts are part of an age-old, ongoing struggle.

Trudy, 29 and working on her second young adult novel, is a presidential campaign widow this year while her husband of eight years follows the candidate he advises to the general election. Max, 10 years older, left his girlfriend in Los Angeles to move to New York and finish another novel. Max is what novelists call an unreliable narrator, and we're never sure just where his relationship stands. The disarmingly friendly Trudy innocently offers to tourguide the relative newcomer. Despite warnings that her openness has in the past been mistaken for "an invitation," lonely Max is soon infatuated and begins work to escalate the friendship to romance. He succeeds by intermission, and act two becomes a suspenseful game of odd-man out with the absentee husband.

In addition to going long stretches without her husband, Trudy's guard is down these days as she genuinely wrestles with such existence fundamentals as determinism and free will. This give her appreciable depth, and, Kazan must hope, will spare the play from sounding like just another romcom.

The fact that only Trudy is interested in these issues just goes to show that, ultimately, the highly intelligent Max "ain't nothing but a horndog." He dismisses her attempts to engage with "You say like a lot," or lumping it all as "astrology." Although he professes to offer Trudy love worth aborting her marriage, his inability to hear her is a tragic flaw that limits the potential for the relationship, and will lead to the less-than-happy ending.

These are critiques of the type of relationship Kazan has chosen to tackle more than critiques of the play. To her credit, she does not try to iron on behavioral wrinkles. While the journey of Trudy and Max is fun, where it's headed, as with any love triangle, doesn't come without pain.

In the end, Trudy no longer believes the heart, as she says, "can stretch to encompass so much more than convention dictates." By curtain call, we feel that the talents and perceptions of Kazan and her team have stretched Trudy and Max in Love beyond the limits of the genre's feelgood conventions.

Nevertheless, director Neugebauer masterfully guides her cast to the sweet spot on the comedy curve, where actors earn laughs through honest characters. Aya Cash is perfect, and proof positive that intelligent women are the sexiest. Her Trudy exudes the contentment and centerness that men like Max want, but can't generate on their own. Michael Weston gives the needy Max such genuine likeability that make we're willing to forgive his blindness and root for his success. Celeste Den and Tate Ellington create a half-dozen distinct supporting characters. Ellington especially provides each of his with such individuality that we believe they have full lives offstage.

The set by Laura Jellinek is an archItectural achievement in seeming to make the Argyros Stage wider than it is. With the help of Lap Chi Chu's lighting, she allows Neugenbauer to create enough locales for the play's many scenes. Costumes by Melanie Watnick help us understand the characters, and Cricket S. Myers sound cues help Kazan and Neugebauer integrate the music that they, and Trudy and Max, love.

TRUDY AND MAX IN LOVE

The behind-the-scenes team for Trudy and Max in Love is worth noting. READ POST