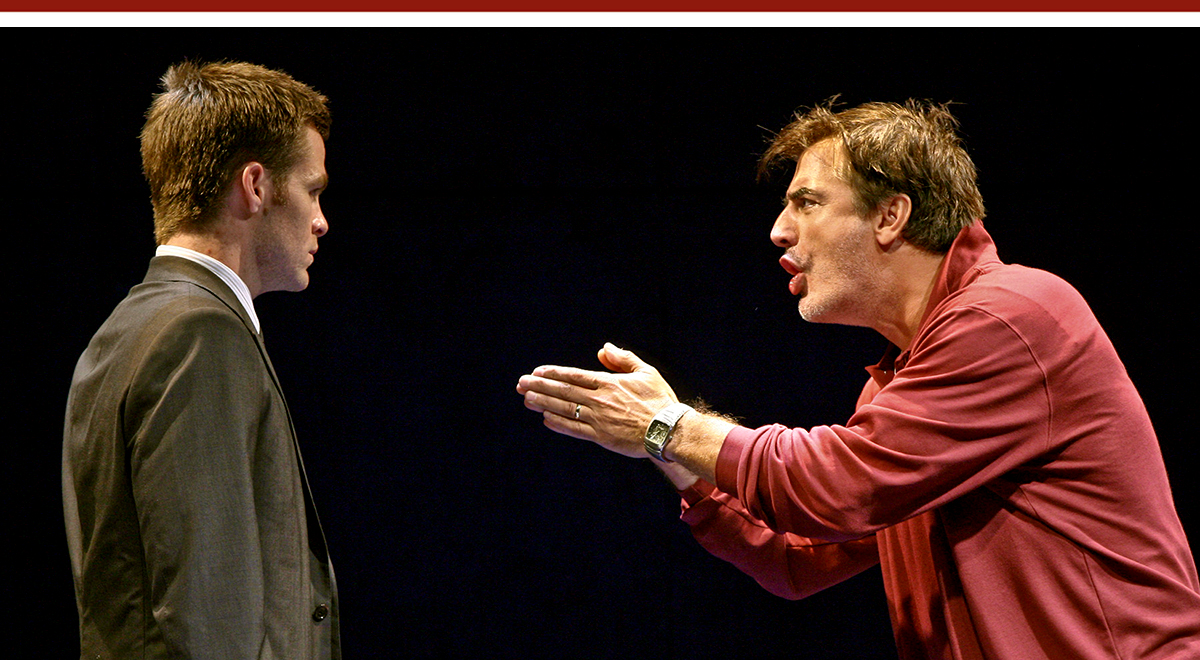 Among the intrigues in Beau Willimon's Farragut North, a winning backroom drama about high-stakes political campaigns and the operatives who play them, is whether an upbeat "love of the game" or a weary cynicism will ultimately own the play's tone.

Giving buoyancy to the more optimistic option is last year's Presidential contest. For many, certainly the majority watching the Geffen Playhouse staging (through July 26), the election of Obama was an episode of mold-breaking that promised a new era of integrity at the top. That backdrop provides subliminal updraft to an early confession by communications manager Steve Bellamy (Chris Pine). This time, he says, he really believes in his candidate's potential for good. Though Farragut is not about Obama, his election has leavened the playing field enough to allow that Steve may be expressing inner insights and not self-delusion, and not just blowing smoke.

Farragut North arrives in Westwood as an intact import from New York's Atlantic Theater, except for four new cast members, including Pine. Pine not only adds huge marquee value – he's Captain Kirk in J.J. Abrams' universally praised new Star Trek series prequel – he is a solid lead returning to the Geffen after appearing in the first casting round of the West Coast premiere of Neil LaBute's Fat Pig.

The arena for Willimon's five political operatives – who include wannabes, wunderkindern, interns and hardened vets – is Des Moines, Iowa before the Presidential Caucuses. What were, in the earlier eras Farragut recalls, smoky backrooms and arm-twisting contests, are now, thanks to wireless communications, anywhere and everywhere. David Korins creates the restrained unit set of lounge booths, bar tables and hotel beds, shifting to a barrage of projected video collage by Joshua White and Bec Stupak. Those oppressive clips of TV reporters remind us that what we're seeing is not what we get: the public is at the end of the information food chain.

Willimon keeps us guessing about these characters throughout act one. That a solid 70 minutes of talking heads kept a full house coughless and riveted attests both to his skill at dialogue and suspense and director Doug Hughes' sure hand with pacing and tone. That the stage proscenium's aspect ratio seems destined to be one-upped by the big screen is confirmed in his bio. He is currently adapting Farragut to film.

Part of the magic of the rising arc of act one is Willimon's ability to make every character equally suspect without making them seem the same. Whether it is New York Times reporter Ida (Mia Barron), lowly staffer-on-the-make Molly (Olivia Thirlby), campaign manager Paul (Chris Noth), opposition campaign manager Tom (Isiah Whitlock Jr.), spokesman Steve, or press director-in-waiting Ben (Dan Bittner), all are utterly contemporary, but with a touch of the Bard's big-theme flaws to give the play even deeper resonance. Steve's travails amount to over-ambition undermined by over-confidence, up-ending the adage that "you can't shit a shitter." It seems more likely that he who lives by the spin may not realize someone has him in full pirouette until he lands flat on his ass.

To close the play, a communications representative addresses the audience with a prepared statement that puts a public face on the outcome of all the wrangling we've just witnessed. We suddenly realize that these are the first words of the play that would have reached the public. It's Willimon's final word on the matter: We do not know what's really going on and how complicit the media is in the packaging process. The spokesperson's statement is, in a word, crap.

by BEAU WILLIMON
by DOUG HUGHES

Regina Taylor’s 2002 play Crowns, a loving tribute to African-American women based on the Michael Cunningham-Craig Marberry book of the same name, is now rattling the Pasadena Playhouse rafters in a spirited staging by Israel Hicks, artistic director of L.A.’s new Ebony Repertory Theater, which is co-producer. Taylor conveys the emotional essence of the book, subtitled Portraits of Black Women in Church Hats, which is that the self-bestowed “crowns” of these “hat queens” sent a message: we are fashionable, we are devout, we are united, and we have arrived. 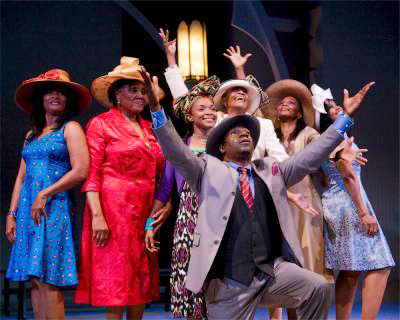 Taylor incorporates many direct quotes from the book’s 50 subjects into the play, which is further enlivened with a couple dozen church songs delivered with soaring, take-me-now-Jesus conviction by the six-woman, one-man cast.

Crowns has been a huge success in its many mountings and inspired one of its past directors, Charles Randolph-Wright, to adapt another Marberry book for the stage. Cuttin’ Up, the book of interviews with African-American men that looked at their lives through the communal setting of neighborhood barbershops, became Cuttin’ Up the play, staged here in March 2007. Coincidentally, Randolph-Wright’s 2008 play The Night is a Child will follow Crowns at the Playhouse.

We can now see that the imitator substantially improved on its inspiration. Where Crowns puts us on a pew for a two-hour revival meeting filled with great singing and personality, Cuttin’ Up lets us sit against the barbershop wall to eavesdrop on serious stories with a deep weave and darker resonance. Which is not to say the men folk have anything more to say. Hardly.

Wearing hats to church is a subject rich with dramatic potential. As a character points out early in the play, it carries on an African tradition as it celebrates the only place slaves and freed slaves were allowed to assemble. Taylor has come up with a thin storyline, of a teen awakening to her heritage, upon which to hang her hats, but it isn’t developed enough to shake off the source material’s intrinsic gallery feeling. While the program indicates that the actresses all have single characters, with two exceptions they do not become clear and consistent individuals. Instead, the show works its way through a half-dozen chapters based on church functions (baptism, funeral, etc.) into which characters pop with the randomness of a breeze rifling the pages of a book.

Taylor has given her story another important wrinkle, that traditions such as these (hat-wearing, church-going, community-embracing) persist for a reason, and the resistant younger generation would do well to get onboard. The new generation is represented by Yolanda (Angela Wildflower Polk), a nascent Nuyorican Poetess displaced to South Carolina to live with her grandmother, Mother Shaw (the great Paula Kelly in a triumphant return from retirement), following the death of a brother. Although passing the hat tradition to Yolanda seems unlikely to succeed, the writing is on the wall, given the way she proudly clings to an oversized baseball cap.

That Taylor’s script skips over potential dramatic treasure is revealed in a couple of exchanges that briefly offer passage to deeper worlds. Early on, Mother Shaw sings directly to her grandchild. It’s a rare opportunity for eye contact between actors and Hicks, Polk and Kelly make the most of it. Later, Yolanda is caught up in an especially exuberant gospel choir. When she stumbles free from the seething circle of singing she seems imbued with insight, questions, and answers. Rather than plumbing that moment, however, the opportunity to delve into what’s going on with these characters is dropped in favor of continuing the parade of anecdotes from the women in the book, with Polk relegated to watching it like a kid on a curb.

But it’s a helluva a parade, and it’s easy to see why it is so popular. This cast – all making their Playhouse debuts – is excellent. In addition to Polk and Kelly, the other women are Sharon Catherine Blanks, Vanessa Bell Calloway, Suzzanne Douglas and Ann Weldon, with Clinton Derricks-Carroll playing all the men. Derricks-Carroll has a slight advantage, since his characters are recognizable by their function: fathers, husbands and preachers. It seems as though all his numbers are stand-outs, with “That’s All Right” being the first one to raise the Playhouse roof. By the end of the two-hour, intermission-less production, the ceiling will settle back down. But, through August 16, it will stay at a rakish angle, giving the California landmark's roofline the dip of a flirtatious fedora over a come-hither smile.

by REGINA TAYLOR
by ISRAEL HICKS

HISTORY Adapted from the book by Michael Cunningham and Craig Marberry, co-produced with Ebony Repertory Theatre