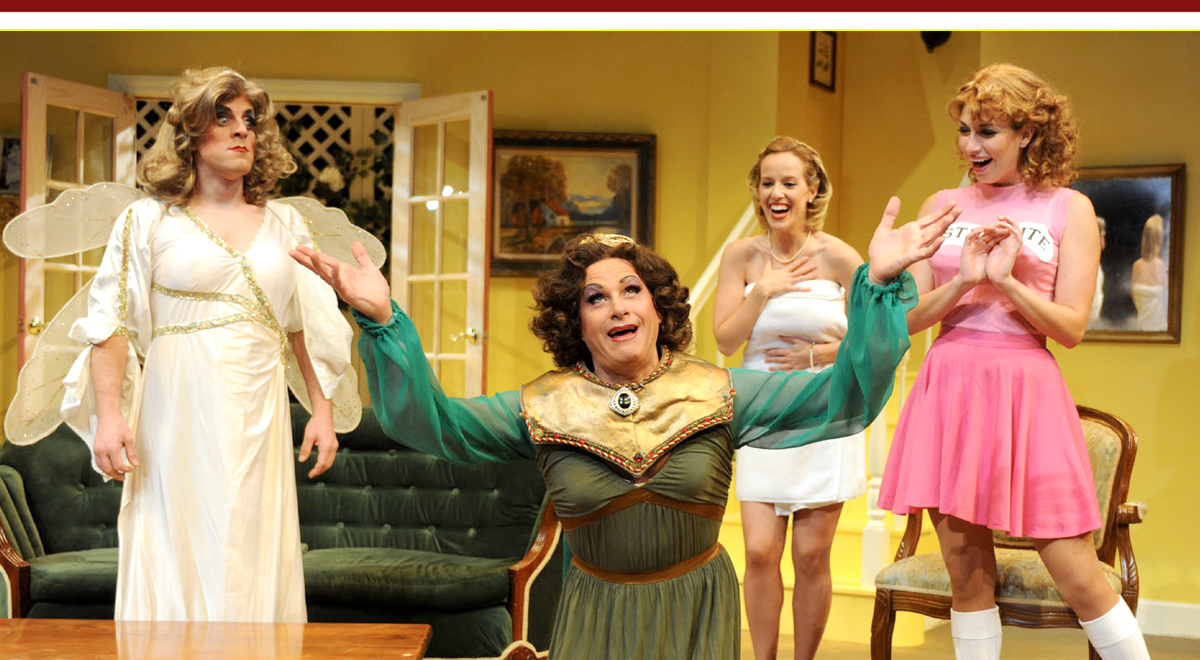 Ken Ludwig writes to please, and his 2004 farce Leading Ladies is pleasing what crowds the International City Theatre can attract to Long Beach through July 1. For the most part Richard Israel's hard-driving cast keeps the pace skipping over the shellac-thin surface of Ludwig's farce. However, the odd weak performance can cause an occasional catch, and underscore the sense that the speed of the playing helps disguise the hurried writing.

Ludwig, best known for Moon Over Buffalo (written in 1995, set in 1953), the book for Crazy For You (1992, 1930s), and Lend Me a Tenor (1989, 1934), has a talent for the quick joke, and he festoons this modest exercise with some sparkling laugh-producers. However, there seems a reason why the plays he sets in the past have been so successful. Anachronism and nostalgia grease the forgiveness glands for these embarrassingly creaky plots, and helps muffle groans over jokes that would be more at home in those earlier eras.

Without the jokes, and energetic performances from the four leads – David Engel, Jamison Lingle, John J. Joseph, and Lyndsi LaRose – our suspensions of disbelieve would be stretched beyond the point of snapping back. Right from the beginning, in an opening scene that introduces a preposterously mismatched couple who are engaged only to separate later, adding another arc – flimsy as it is – to the play's action. Fortunately, Israel has such likeable leads, especially Lingle, who is best able to cut through the more objectionable aspects of this fluff, and give her character believability, and give the comedy something solid to play against.

Ludwig's love of Shakespeare drives this variation on Billy Wilder's 1959 film Some Like it Hot, in which two musicians avoid mob hitmen by posing as women. Ludwig's leads are British actors dragging the Shakespeare canon across America in a series of two-man, abridged performances, After passing through York, Pennsylvania (Ludwig's hometown), Leo Clark (Engel) and Jack Gable (Joseph) learn from a roller-skating waitress (LaRose) that a dying rich woman plans to bequeath millions to two nieces she hasn't seen in decades. They head back, and wearing trunk costumes of Shakespeare's women, pose as the nieces.

He sets Ladies in 1952, seven years before Wilder's film was released. Ludwig's expeditiousness is in evidence from the first lines. A pastor, "Duncan" one of the Shakespearean allusions (Daniel Lench, adding some fidgety business to insure his character is totally unbelievable) has forgotten the time of the his irresistibly ripe fiancée, Meg (Lingle) has been looking forward to. He sees sinfulness in her love of theater, she sees God knows what in his stodginess, but of course they are engaged so, it's clear immediately, she can be torn from him for reasons we will be able to anticipate as soon as the larcenous actors show up.

It's not that farce isn't supposed to be far-fetched. It's that it is not served by illogic and impossibilities. Part of the fun of Some Like It Hot is the tension mounting in the shared sleeping compartments. Which, with Marilyn Monroe playing the musicians' female friend, is completely logical. In Leading Ladies, the men share Meg's bedroom for weeks(?) and there's never any suspicion on her part. (See Albert Nobbs for how long such a ruse should last.)

But, all that aside, there's no grouching about the love coming back from the audience. It's a good move for ICT to bring back Ludwig, whose Twentieth Century a few years back was also a hit. It's a fun night of sloppy laughs for parched audiences, and Israel's cast is ultimately good enough to keep the play's sharp bones from popping through the ribbing.

HISTORY Premiered at the Cleveland Playhouse in 2004