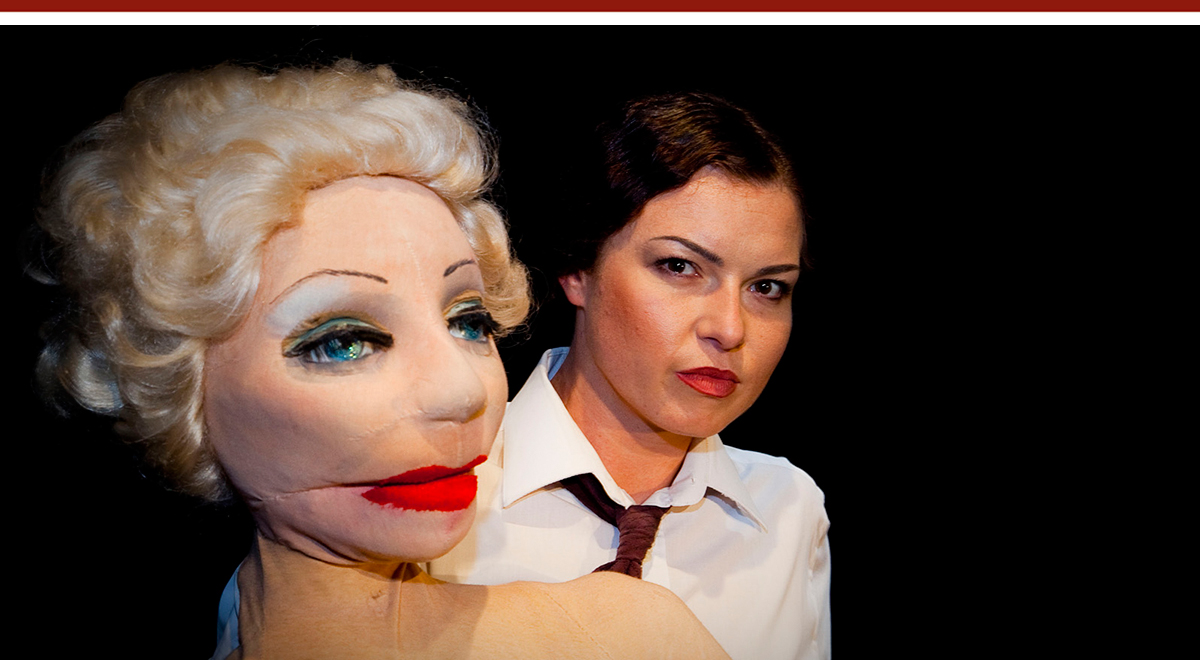 A hanging ghost light and themes of breaking through boundaries loosely link the two one-acts of Dual Citizens, at the Odyssey Theatre Ensemble through March 28. The two solo pieces also tap the mystery that is essential to raising performance, beyond merely reflective and entertaining, to art. However, while one uses mystery to stimulate our curiosity about the characters and ourselves, the other falls victim to it. It’s a fine line, but it's the difference between being pulled onboard a train of exploration, and being left on the platform with nothing to sift through but our own baggage. 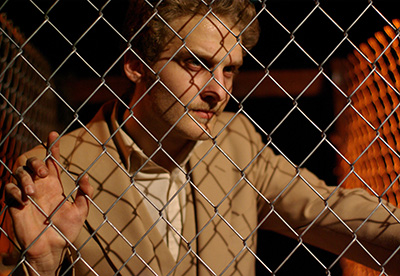 Both Anna Skubik’s Broken Nails: A Marlene Dietrich Dialogue and Anthony Nikolchev’s Look, What I Don’t Understand involve travel. The journeys in Nails concern Dietrich’s effects, which were moved from her Paris apartment and shipped to Berlin following her death in 1992, and the effect she has on a young woman’s self-discovery. In Don’t Understand, we seem to be constantly moving from location to location and back and forth in time, as we hopscotch through a history of one family’s exodus from overrun European homeland to over-protective new American home.

In Nails, which Skubik conceived and Romuald Wieza-Pokojski wrote and directed, the lights come up on a young woman reclining on a large trunk. She is awakened by the wheeze of locomotive engines and German station announcements. Contact with the trunk, representing Dietrich’s legacy, puts the woman in a reverie. She becomes the personal assistant for the star during her final days. Skubik provides the voice for Dietrich, represented by a life-size puppet. The dynamic between the women operates on several levels: famous and unknown, master and servant, and end-of-life versus starting out. The central theme, however, is the harmful effects – on the haves and have-nots – of our obsession with feminine beauty.

Like Greta Garbo, and to a lesser degree Marilyn Monroe, Dietrich came to embody physical perfection. Skubik reminds us that men could be overwhelmed by simply looking at her photograph. But, while Garbo went into self-exile before cameras could document her aging, and Monroe died in her mid-thirties, Dietrich stayed in the public eye into her 80s. The cost of all that, and the resentment a young woman feels for those who participate in setting these absurd standards, are palpable in this hour-long piece.

Technically, Skubik’s piece is a marvel. Her puppeteering is effortlessly subtle and this Dietrich seems to live and breath. A brief shoulder-massage by the assistant is puppeteer hall-of-fame material as we feel the stress and bone-weariness ease out of the boneless puppet.

Where Nails is dreamlike, the world of Nikolchev’s Look, What I Don’t Understand is nightmarish. The versatile unit set he designed begins as a tiny chain-link cage, then flips back to become a small building with a door, and stairs rising on either side. The program lists one unifying director and four other directors for each of the hour-long play's parts. With more production resources we might have had the helpful establishing projections and light cues that are taken for granted in larger houses. Still, these pieces embrace a barebones, poor theater aesthetic, and storytelling must be the spine. It may be too much to try taking us to so many places without returning to a central narrator touchstone. At least for an American unfamiliar with the specifics. And, using a five-person directing team may make the fractured flashbacks even more splintered.

The cage represents a containment area for people immigrating into the U.S. From the initial image – in which an innocent man is unfairly detained – we quickly move back to scenes in Bulgaria that precipitate him leaving. We also make trips to the Congo and elsewhere as we follow this man’s history, and get a sense of the harsh conditions and brutality that forced him out. But throughout, we feel we are clinging to the coattails of someone racing through his own memory, changing personalities and locations.

Both plays share a wonderful, gritty post-War Europe starkness. Both artist bios state an ongoing commitment “to continue the Dual Citizens project to eliminate passports.” America may be a little unsympathetic to easing border restrictions these days. But the kind of imaginative travel available in Nails, and possible in a less jagged Look will always be welcome. 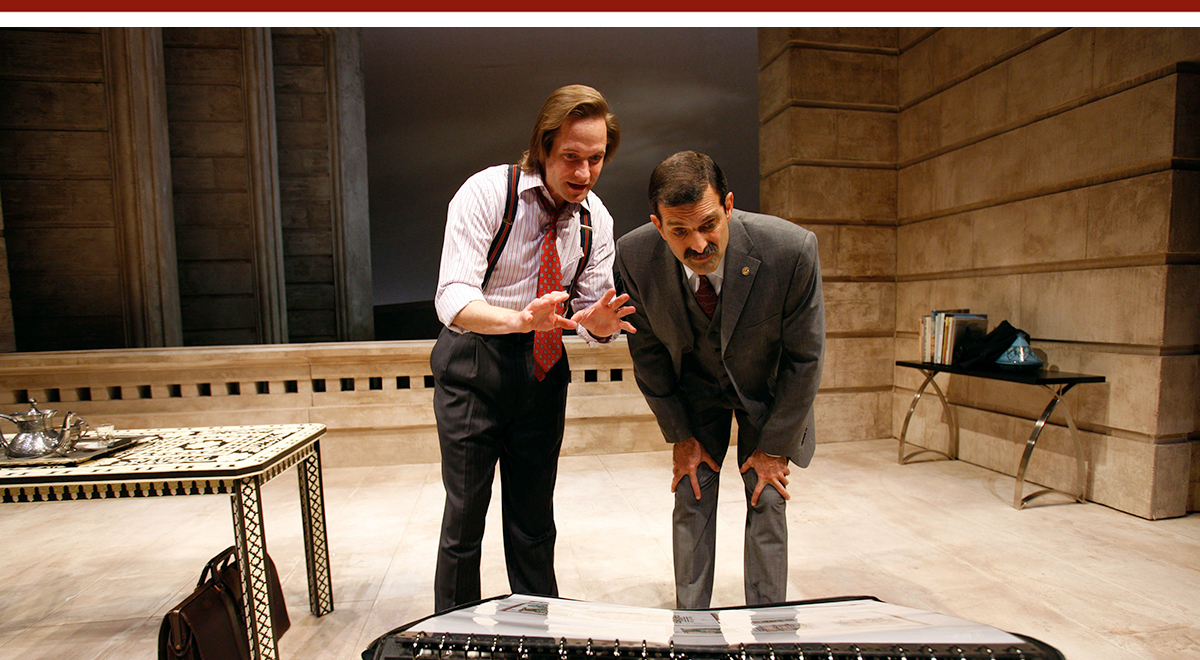 Time and the River

In Howard Korder’s newest play, an ambitious young American architect becomes mired in a visionary project overlooking the “mother river” that runs through the capital of the fictitious Middle Eastern country of Aqaat. In a Garden, receiving its world premiere on South Coast Repertory’s smaller stage through March 28, is a departure from the writer’s most visible work. Essentially a two-hander, it is a chess game between a master manipulator and his idealistic quarry, a Shavian face-off about individual and cultural one-upmanship.

Korder’s previous scripts developed at this theater – Boy’s Life, The Lights, Sea of Tranquility, and the two produced here, Search and Destroy and The Hollow Lands – required 67 actors between them. By reducing the body count for In a Garden, Korder wins on three fronts. Producers have a topical look at U.S.-Arab relations that is financially viable. The writer has been able to focus his ideas without limiting them. And at least our audience watched attentively for two-plus hours like mesmerized tennis fans at Wimbledon.

Mark Harelik and Matt Letscher man the principle roles, while Jarion Monroe and Phillip Vaden take brief but crucial secondary ones. The characters represent world leaders, struggling artists, manipulative government ministers, and dutiful soldiers far from home. Past directors have taken advantage of Korder’s epic visions to drape the dialogue with window dressing. Here, the disciplined David Warren keeps the focus on the words – delivered by Harelik in another of his finely etched creations and Letscher in an appropriately flustered portrayal. Monroe, returning to SCR to reunite with co-star Harelik from 1990’s Search and Destroy, shows his mastery by slyly distinguishing Aqaati’s powerful leader from the costumed body-double who routinely appears in his place. Vaden adds a gentle, empathetic soldier for the play’s coda.

The dialogue bears Korder’s subtle signature, operating both as conversation and literature. As projections time-stamp the scenes from 1989 to 2004, time seems to be the only thing progressing on Christopher Barreca’s large stone balcony. Andrew Hackett (Letscher) is engaged by Othman (Harelik), Aqaati’s Minister of Culture, to create a compound that might earn international fame for the yet-unproven architect. More likely, Korder alludes, the project will become one more hidden stratum in the millennia of cultural sediment that continues to pile up in the “cradle of civilization.”

Korder’s Garden is just as stratified. It begins as an awkward dance of alpha males. That jockeying for position becomes a stand-in for the conflicts and land-grabs that have driven world history. There is also a send-up of architecture’s importance, but, as in Three Days of Rain, Arcadia or even The Fountainhead, it is the architecture of the human and national psyches we are probing here. Othman longs to be the master behind the builder. We will discover that he has milked the protracted relationship for strategic purposes. But, perhaps more importantly, he is driven by ego. “I will build you,” he tells Hackett in a twisted echo of John Keating, the inspirational teacher in his favorite film, Dead Poets Society. Korder's Pygmalion is shaping the artist and the work of art he carves from stone. Ultimately, however, it is himself he is trying to define.

There are no answers provided by the playwright, unless you find resolution in two ideas that waft in the air after the play has concluded. That people, peoples, merely hover, ineffectual, like insects over the river flow of history. And that the beauty we create will outlast us all. Not only has Korder created another beauty, it's one audiences are likely to see produced. 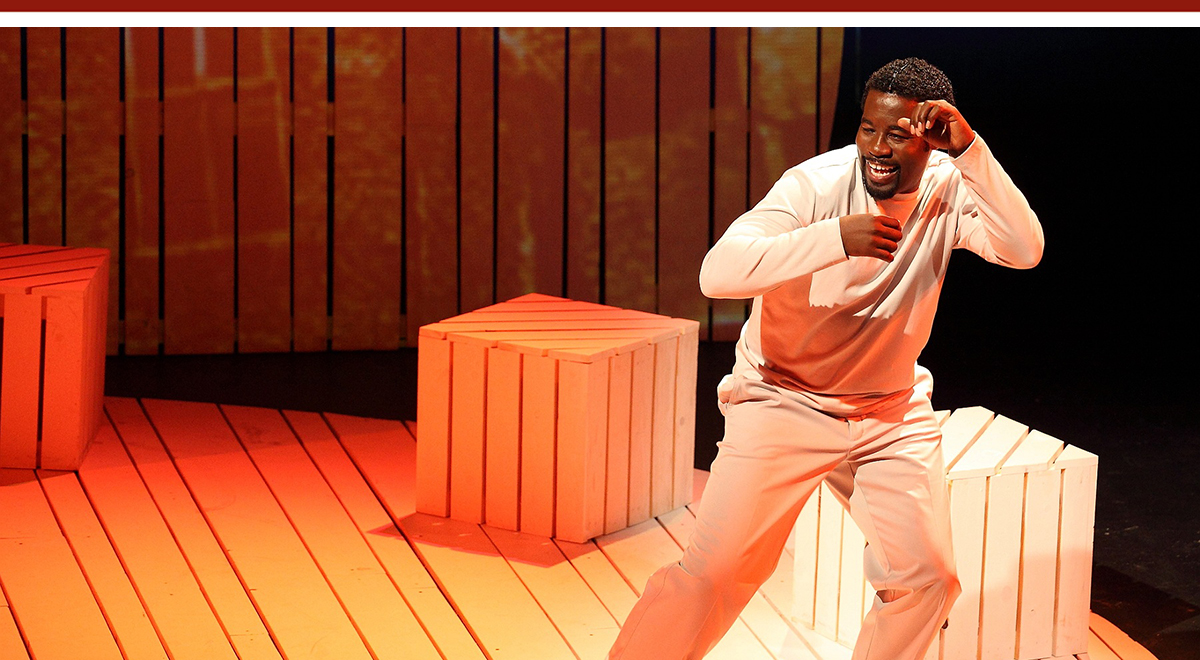 Daniel Beaty’s new one-man show, Through the Night at the Geffen Playhouse through April 4, adds more character, poetry and steely honesty to the stage literature of the contemporary African-American experience. Beaty’s script is woven with the words of roughly 10 men and women, young and old, spoken directly to the audience or in conversation between characters. The variety plays to Beaty’s range, for a dramatic tour de force that seeks to move audiences emotionally as well as move them away from destructive crutches – whether those dependencies be justifiable resentments, antiquated prejudice, or unhealthy eating habits.

We follow the characters over a single evening, which begins at 6 as a boy talks about helping his dad stop stressing about work, and leads up to a midnight deadline for one man’s difficult decision. There is no external, omniscient narrator. The only voices are those of the characters, who combine to create, according to the play's subtitle, "a soul aria.” Through the Night, a co-production with New Jersey’s Crossroads Theatre, where this production, staged by writer/director Charles Randolph-Wright (Cuttin’ Up, The Night is a Child), opened last month.

Despite Beaty’s talents for creating realistic women, his script’s perspective is male – both straight and gay. Two father-son relationships create the central spine of the play’s movement, while the lateral involvements with their wives, girlfriends and lovers feed into the narrative drive. Along the way, the stories are propelled by people dealing with real world issues – uphill battles to get a quality education, re-enter the workplace after prison, and end harmful addictions to food, drugs, and work.

Helping distinguish the characters is designer Alexander V. Nichols simple set – a circular back wall upon which his projections and lights establish location. The whitewashed disc is stage background, as its vertical wooden slats hint at character backgrounds – rural fences, barns, or even a ship’s deck.

Despite Nichols’ guiding lights and Beaty’s clarity, there may be some confusion sorting out who’s who at the beginning. But that passes after only a few of the show’s 90 (intermission-less) minutes. First is Eric Rogers, the boy who mixes up curative iced teas above his father’s natural supplements and health store. The store name honors Maxine, Mr. Roger’s mother, who died at 56. As her son saw it, she worked such long hours to support the family that she relied on late-night fast food. That eventually killed her, and inspired his start-up business to promote healthy food to his community. Unfortunately, the store seems stuck in start-up, which has caused his wife, Sarah, to work two jobs in hopes the business can someday turn a profit. The irony of shifting the two-job demands from mother to wife is not acknowledged by Mr. Rogers. Certainly Beaty sees it, which may explain why we never hear from Sarah. (We can only imagine what she might have to say.)

In addition to the Rogers’ story, there are the father-son conflicts between Isaac, an overworked music business marketing director, and his father, Alfred, a local minister who goes by the name the Bishop. Alfred attends Overeaters Anonymous to get off Ho-Hos and get his 300 pounds off the shortlist for heart attack. A quasi-father-son relationship exists between Isaac and Antoine, a high school grad who succeeded thanks to Isaac’s role modeling and his audience-pleasing single-mom's never-take-no-for-an-answer feistiness. This evening, 'Twon is making plans to attend Moorhouse College, and trying to convince his girlfriend to come with him to Atlanta.

The other principle storyline is about 'Dre, out of prison and off drugs for a year, he wrestles with doubt about the future of his girlfriend Kim and their baby, which will be born this evening. Like the clock, winding towards its hands-up surrender, Dre and the others must give up old habits if they're to reach a new day.

Beaty slides between prose and poetry as gracefully as he step-glides to a gust of Luther's "Power of Love." His seamless integration of word-rhythm into dialogue is also Shakespeare-smooth, and another impressive touch in a successful outing that delivers on several levels. Hopefully if it draws healthy attendance, it will draw some away from unhealthy meals.