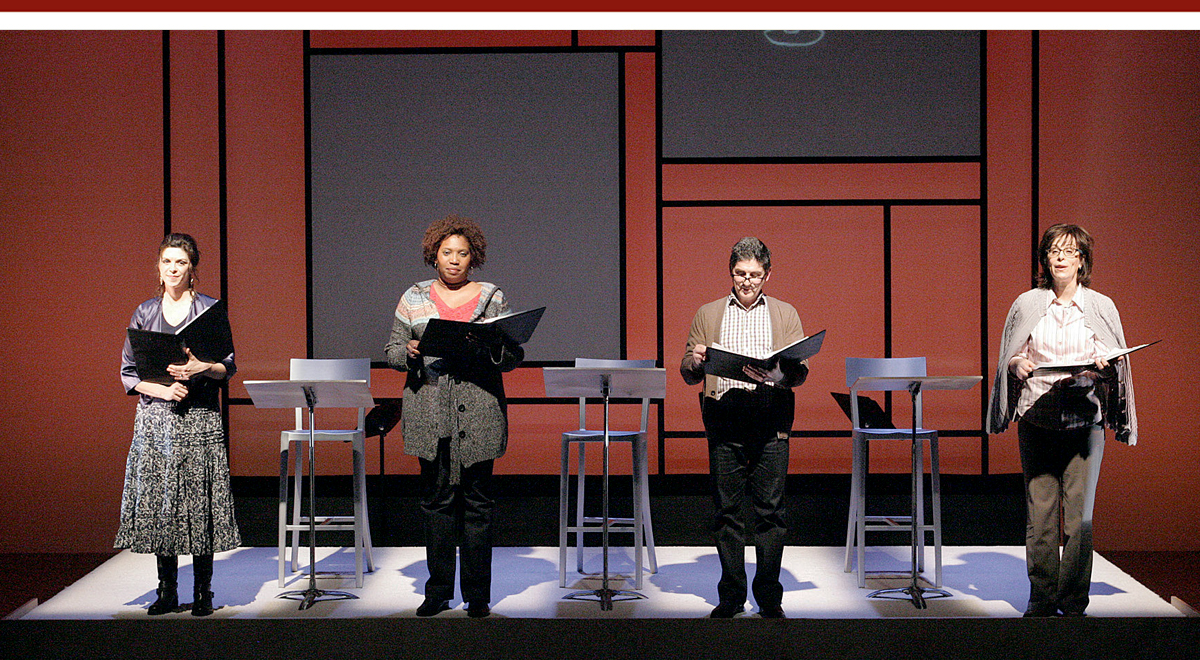 Despite a top-flight cast, collected work by leading playwrights, and a great stage director and design team, In Mother Words, a 90-minute tribute to both the mothers we all come from – as well as the mothers some of us become – is weak tea in an art form designed to pack punch.

The first cast in the Geffen Playhouse’s projected two-and-a-half month run (through May 1), directed by Lisa Peterson, is Saidah Arrika Ekulona, Jane Kaczmarek, James Lecesne and Amy Pietz. They accomplish what they can, digging in where the material allows, but overall restrained by the reader’s theater format. Ekulona and Lecesne are listed as cast members for the run, while Kaczmarek and Pietz will apparently get reprieved and replaced – Kaczmarek as soon as March 16, when she performs Linda Loman for five LA TheatreWorks tapings at the Skirball Cultural Center.

So, while the total is not equal to the sum of the parts, there are parts of particular worth, where the actor and the writer squeeze a powerful experience into the truncated presentation. In general, these most-successful sections are vignettes that go beyond the potential glories and horrors of mother-child union and use the relationship to explore other subjects – gay marriage, adoption, aging and decline, and sacrifices of war.

Kaczmarek makes the first big impression with Michele Lowe’s "Queen Esther," about a mother regaining her love-balance after resisting early indications her child is probably gay. Shortly after, Lecense also gets to the heart of the matter with story of a gay couple in Marco Pennette’s "If We’re Using a Surrogate."

Pietz gets her best showcases at the midpoint and finale. First. it's "Michael’s Date" by Claire LaZebnik, in which Pietz embues a small scene with large meaning. Through the letterbox perspective of her rearview mirror, a mother watches the end of her autistic teen’s evening, and her own hopes of his chances for happiness, grow and then burst. And then, as good parents must, she dusts off her dashed hopes and looks ahead to another opportunity to help.

The other monologue is Annie Weisman’s "My Baby," which wraps up Mother Words with a circle-of-life spin. New mother Pietz manages to find a little appreciation for her own irritating mother, as only becoming a parent oneself can provide.

Ekulona, who helped take Ruined from Chicago to New York and Pulitzer (but, sadly, was missing in action here in L.A.), gets her meatiest moments in Jessica Goldberg's "Stars and Stripes."

These are curious enterprises, these star-propelled, semi-theatrical events with their rotating actors – cast names appear only on an insert; not in the printed playbill. Last year’s Love, Loss and What I Wore had more of a throughline and ran a respectable run of many months. But there is a disconnect, as evidenced in the tepid almost-applause that occasionally ripples after a scene without catching on. The physical presence of music stands, the occasional glances at scripts that break eye contact with the audience, and recall an earnest Barnes and Noble reading

Nevertheless, Peterson does what she can to overcome the hurdles. Rachel Hauck’s set is simple, with three square screens embedded into an interlocking frame design. The screens display Jan Hartley’s projections and Emily Hubley’s playful animations. Jill BC DuBoff’s complementary sound and music and gentle, empathetic lighting by Christopher Kuhl round out the design. 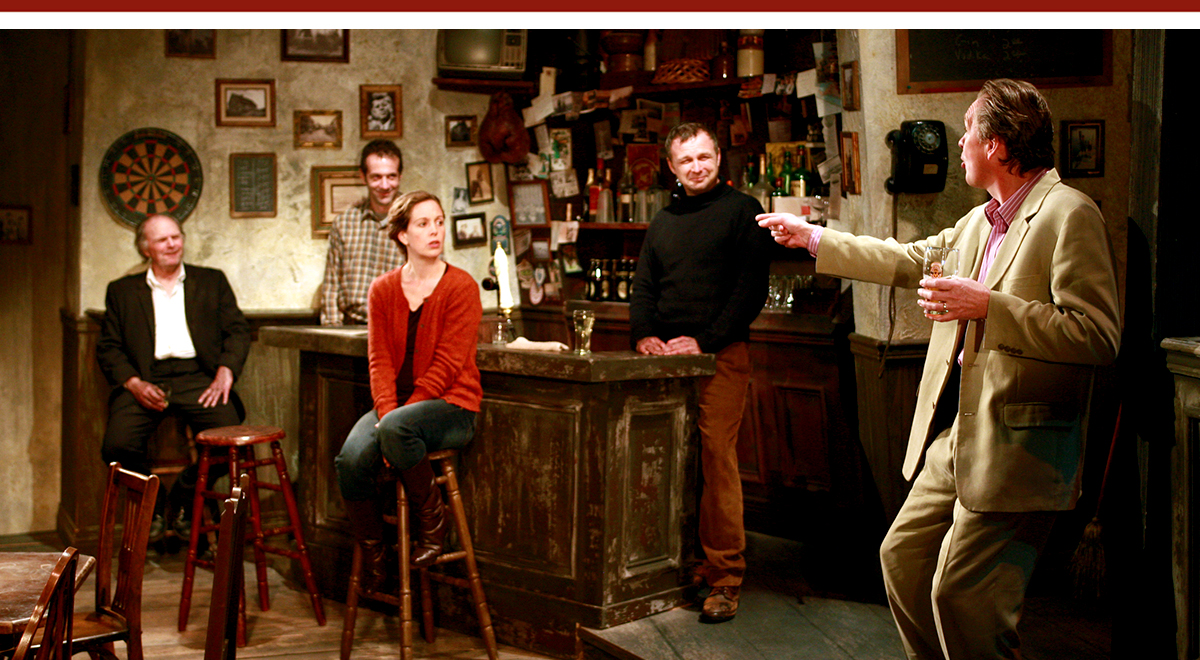 The spirit moves us

In the way spirit photographers capture apparitions wafting among the living, theater critics can spot messages in plays where they do not exist. Conor McPherson's 1997 The Weir, recently directed by Warner Shook at South Coast Repertory (closed April 3), may have inspired such a phantom vision.

Shook's Weir continues his string of SCR successes extending from Last Night of Ballyhoo in 2003 to last season's Crimes of the Heart. He shows no loss of empathy moving from the comfort of his native South, the setting for both Ballyhoo and Crimes, to the Irish countryside of The Weir, and a property that, years ago, would have been the province of retiring Artistic Director Martin Benson. (A rare shared credit among every member of Shook's cast is working with Benson.)

We're tipped that something wonky is coming by the gently off-kilter angles of Thomas Buderwitz' realistic set. Peter Maradudin provides an uncharacteristically uninteresting light plot, however, in what clearly is a missed opportunity to contribute to the eeriness. Angela Balogh Calin and Jim Ragland add costumes and sound, respectively, that enhance without drawing attention – except in the case of Ragland's listen-here cue for the lines: "wind like this one tonight, howling and whistling in off the sea. You hear it under the door and it's like someone singing."

In the opening scene, bar owner Brendon (Tony Ward, in the only performance shortcoming) welcomes two of his regulars: Jack (Richard Doyle at ease in his wheelhouse), the aging owner and chief mechanic of the local garage, and then Jim (Daniel Reichert, in a nuanced, season highlight). Shook lets McPherson's easy flow of dialogue establish the three bachelors' personalities and long relationships before Finbar (James Lancaster, in a mix of fun and feistiness he was born to play) makes a prodigal return with Valerie (the versatile Kristen Potter in another of her memorable performances) in tow. The reunion with Finbar and introduction of an attractive woman with a mysterious reason for renting nearby, promise to shake up the off-season emptiness of the country pub.

As drinkers will do, especially when there's a shapely ear to tug, the men launch a series of impressive – and increasingly unsettling – tales about local encounters with ghosts. Jack's and Finbar's are second-hand, but Jim really has an impact with a personal experience one rainy night in a graveyard. Hired along with a friend to inter a man, the casual laborers are approached by a shadowy stranger. He insists the freshly dug grave they're about to lower the casket into is the wrong one. It must go over there, he says, pointing to the headstone of recently deceased girl. It wasn't until the next day that Jim saw a photo revealing that the stranger was the ghost of the dead man – a local child molester..

The men quickly apologize to Valerie for Jim's story, but she waves off the concerns. assuring them she did not think them foolish for half-believing these supernatural events. She then tells of a phone call she received after the horrific experience of her daughter's drowning death at a swim meet. She says that she clearly heard her terrified daughter's voice begging for someone to save her from a shodowy man approaching her from across a street.

That would make for a fine evening of theater, enhanced by these performances – especially Potter's build from detached listener to guts-spiller, Reichert's restrained portrait of the lifelong peripheral personality, and Lancaster's flashy "Jack the Lad." But McPherson has a fifth story. After Finbar and Jim head home, Jack, Valerie and Brendon move to the fireplace for brandies and casual conversation. Valerie asks Jack if he ever married. He tells of an affair with a woman whom he thought he loved, but allowed to lose interest. Some may shudder in the chilling realization that McPherson is showing a real ghost, whose casual toss of love was the loss of life, leaving him a phantom in his own story.

But McPherson and Shook do not linger there. Instead, the button comes after the bar has closed and the owner and his last two patrons have left. In more a gimmick than a reward, the tavern phone begins to ring as lights fade.

HISTORY Premiered at The Royal Court Theatre Upstairs, London, in July 1997, and premiered on Broadway at the Walter Kerr Theatre in April 1999.