Anton in Show Business, a comedy of woe over the lot of women, theater, and women in theater, gingerly hits its marks in a bouyant, farce-tinged staging at the new X Repertory Theatre in downtown L.A. Anton follows three actresses from auditions to first audience of an independent production of Chekhov’s Three Sisters. Along the way, they wrestle through a Wonderland of outrageous characters and challenges that combine to make this thoroughly engaging and painfully familiar. 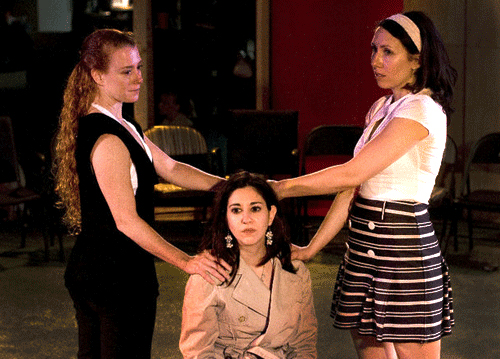 Originally scheduled for four performances in July, the production returned for short runs in August and September. Producers hope to bring it back again before year’s end. (Watch for news here.)

XRT Company Member Amy Chaffee directs Anton, a ten-year-old script from Jane Martin, the name generally agreed to be the unconfirmed alias of former Actor’s Theatre of Louisville Producing Director Jon Jory. To the stage directions' call for a poorer theater set of bare stage and few props, Chaffee adds the intimacy of an AA meeting at a community center. Not only does it connect this audience with these actors, it suggests a new company able to connect with the community.

She has assembled a wonderful cast of 12 young women, many of whom list XRT training in their bios. Three play the Sisters cast, three play a variety of males and females involved with the production, and six are ensemble to help with scene changes and adding energy and movement. At the back of the high-ceilinged former warehouse, a “black box” area sits behind a sliding hangar door. The stage floor is four large squares of colorful carpet, surrounded by a ring of folding chairs. Before entering, audience members are asked to place their shoes in a rack. It's done to protect the carpet, but it adds to the informality of the event. Four modest light towers stand at the corners. In the center of the chairs, a ghost light reveals the prostrate forms of five women in foundation garments, motionless for all of pre-show. They set the mood and suggest some messages. Women are exhausted, or exploited, or just ready for some excitement.

Chaffee wants the play to strike its potential as more than a wacky skewering of contemporary theater. And, surely, the romping ensemble embody the dichotomy at the heart of Anton's serious side. As one character says, acknowledging the play's conceit, "Eighty percent of the roles in the American theatre are played by men, and 90 percent of the directors are men. The point of having a male director played by a woman is to redress the former and satirize the latter. How's that?" (That's pretty telling in a play written by a man pretending to be a woman.)

With a nod to Our Town, Marcie Scott opens the show as the "stage manager," offering a commercial-eyes'd view of American theater along the lines of Steinberg’s famous New Yorker cartoon, which has Manhattan dominating the U.S. As the story unfolds, we'll meet a series of directors, producers, and corporate funders as the actresses personalities sort of parallel those of the Chekhov siblings.

Freshly graduated from drama school, Lizabeth Cartwright (Carolyn Zanelli) is ecstatic to be engaged in her first professional role. Casey (Marwa Bernstein), is a jaded veteran of 200 off-Broadway productions, with a tale of backstage romance for every one. Holly (Marci Adelman), who went straight from High School to Hollywood, is the ill-fated production's name-above-the-title attraction. Martin gave Holly more facets than Adelman – or maybe anyone – can make sense of. Her quest for physical "perfection" has given her more cutlines than the Sunday Times. ("Beauty is subjective," one of the others reminds her. "Not in Hollywood," she replies.) But while on one hand she is an eager poster girl for the objectification of women, on the other she demands that the producers hire these earnest nobodies, making Three Sisters an out-of-left-field stand for sisterhood. Adelman fails to make these shifting aspects of Holly's personality seem more than flightiness. For the play's final moments to really resonate, that's going to be necessary.

That aside, Adelman and the others have a great affinity for broad comedy – keeping a tight grasp on their characters center while letting the lunancy fly. They earn their laughs, which are abundant. Especially impressive are Beth Anne Garrison, Kelley Lippincott-Chura and Scott, who between them create a dozen or so important characters. The remainder of the ensemble are Natalie Camunas, Cristina Cimellaro, Tyger Leigh, Kaitie Ty Warren, and Dianna Youkey. Lizza Monet Morales plays an audience member who turns out to be a critic, and breaks the fourth wall from our side by interrupting the action with questions and comments.

You can have too much of a good thing, and occasionally Chaffee's flourishes –ensemble tableaus and inter-scene movement (Bernstein did the choreography) – tug at the brisk rhythm she has established. An overstaged curtain call, for example, nearly exhausts the applause before the leads get their well-deserved bows. But, these complaints are nitpicking that only prove how polished the main package is. It's a production with lots of ideas, energy and commitment, that is its own answer to the question Martin's script asks: Can theater stay exciting? 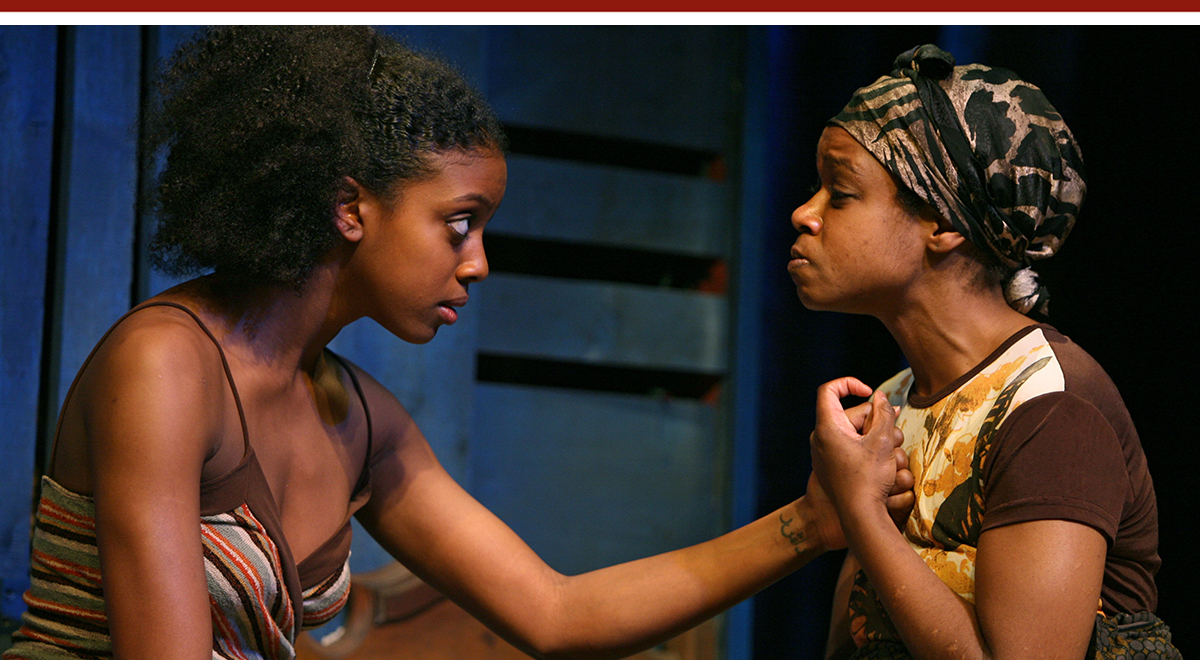 The 2009 Pulitzer Prize-winner for Drama, Lynn Nottage’s Ruined, is a tightly woven, multi-threaded story that personalizes the ravages that civil war in the Democratic Republic of the Congo has left on its land, population and prospects. The playwright allows a tentative sprout of hope to rise from all the char and suffering. But she is clearly not optimistic about an end to wars of greed and barbarism. She is merely saluting the righteous resilience of human will.

Nottage originally headed to Africa, with director Kate Whoriskey, to write an adaptation of Mother Courage set among the refugee women of the Congo. After being surrounded by their raw courage she decided that even minimal Brechtian artifice would diminish the power of their stories. During the writing process Chicago’s Goodman Theatre stepped forward with a commission and followed with its premiere. It transferred to New York’s Manhattan Theatre Club, won the Pulitzer and is now making its West Coast debut in a joint production by Seattle’s Intiman Theatre (where Whoriskey is in her first season as Artistic Director) and the Geffen Playhouse (where it continues through October 17).

Ruined centers around Mama Nadi and the ten women who work in her bar near a mining town in Congo’s Ituri Rainforest. Orphaned from their families, or ostracized by their tribes for falling victim to rapists, the young women arrived at Mama Nadi’s with nothing. For Nadi’s protection, they trade the freedom of rape targets for the indenture of sex and food servers. Nadi (Portia) is a fascinating cross between protector and exploiter. The “Mama” owes more to her marketing than maternal instincts. Only three of the ten are in the play, and when any of them move too slowly, she threatens to kick them out. Whether it’s tough love for the girls, or just more tough luck, is never clear. What is clear, is that we are in a world where survival demands total sacrifice.

As the play begins, Christian (Russell G. Jones) is dropping off a fresh supply of black market liquor, condoms, chocolate, and cigarettes. He is also dropping another round of hints about his desire to win Nadi’s hardened heart. After his mating dance gets the usual cold shoulder, he asks if Nadi can add two more girls to her crew. Salima (Quincy Tyler Bernstine) is a young woman who has lost her husband and baby. Sophie (Condola Rashad) is Christian’s 18-year-old niece. Although “ruined” by torture-rape and unable to service the men, she can sing. Nadi reluctantly agrees and soon the veteran Josephina (Cherise Boothe), daughter of a former chief, shows them their cots.

When Sophie sings, backed by the bar’s band (guitarist Simon Shabantu Kashama and conga player/ensemble-member Rob McBee), she manages to rise above the bleakness – literally by climbing on a table and lyrically with a bird’s-eye perspective of the situation. People “come here to forget” and “dance like it’s the end of the war.” The songs, by Nottage and Dominic Kanza, include one with an awkward metaphor. “The caged bird still cries out to be held,” Sophie sings, referencing the birdcage in Derek McLane’s bar set, which is in turn surrounded by palm trunks that rise like the projected shadows of the birdcage bars. Everyone here is trapped.

Also surrounding the bar is the war. Government and rebel forces alternate commandeering the bar for food, drink and company. Nottage slips in just enough discussion to explain why they fight. Columbite-tantalite (or "coltan") mines worth billions to cell phone manufacturers have launched a battle for control of the region. Under Whoriskey’s direction, and in Paul Tazewell's costumes, the rebels and government soldiers seem interchangeable.

The pieces all seem in place, and yet, the impact is muted. It is the role of Mama Nadi, like Mother Courage, that needs to lift this experience to a monumental theater event. The anger, playfulness, toughness, and hurt are there. But those still waters that run deep remain untapped. We see the actions but miss the mystery and depth of a woman who must first move us to Brechtian despair and then allow us that ever-so-tentative whisper of hope. Instead, we head for the exits mostly with echoes of yelling.

The other lead who must touch the ineffable is Rassad, and she does much better at making Sophie a hauntingly tragic figure. Her singing draws defiance from the chaos and in her we see a young version of Brecht's famous warhorse of a half-century ago. Jones is similarly affecting as Christian, and Bernstine is heart-breaking, somehow maintaining a puffy, swollen face that smacks of battering.

Nottage has taken on a big challenge in painting her portraits in relief against a backdrop of such bleak malevolence. Her goal is to avoid offering any cheap satisfaction from unrealistic solutions. Instead, she insists on showing a brutal world where it may be left to the Mama Nadis, with their conflicted motivations and hidden horrors, who are the only ones strong enough to save us.