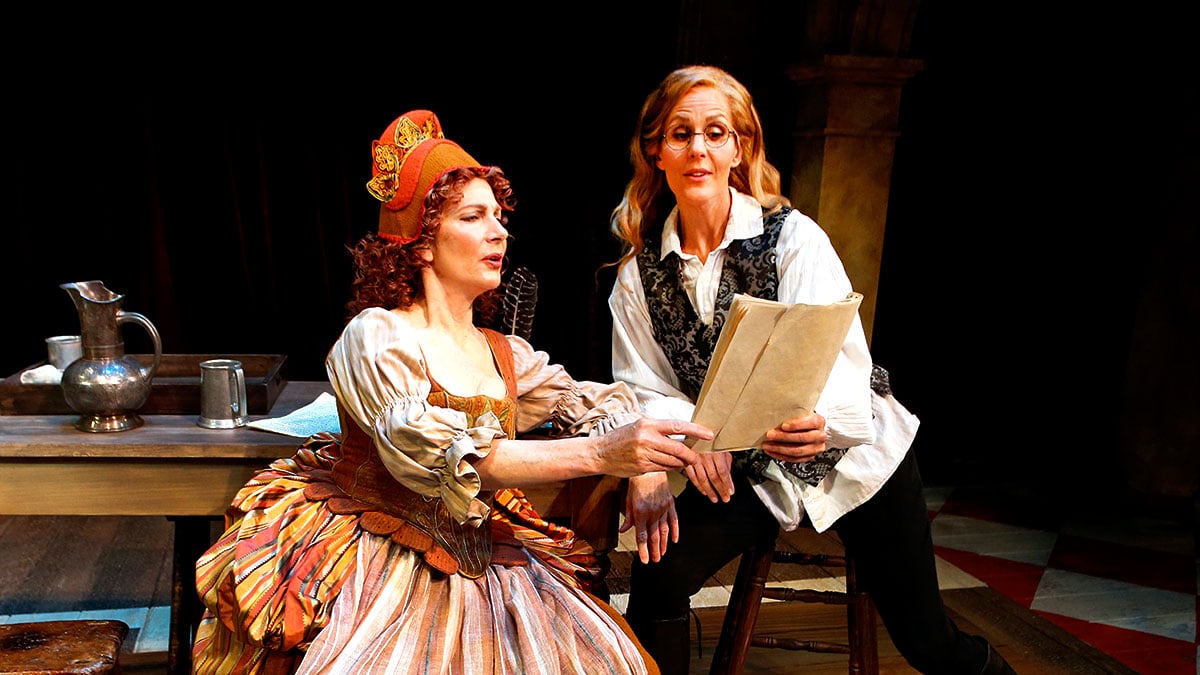 Amy Freed throws herself into a revision of Shakespeare's Taming of the Shrew.

Like a titanic father figure, William Shakespeare has cast a shadow over four succeeding centuries of playwrights. Were he somehow watching each descendant generation he would surely take personal pride in those he inspired to soaring command of language, dazzling displays of wit, and new perspectives on humanity. Amy Freed, whose insightful, irreverent comedies mix an ancient's grasp of world and theater history with an anarchic love of anachronisms and wordplay, would certainly have earned his approval. With her new update of his out-of-step Taming of the Shrew, she just may earn favored-child status.

Like a daughter driven to both vindicate and show-up the old man, Freed has thrown herself – literally – into her adaptation, called simply Shrew!, receiving its world premiere at South Coast Repertory this weekend (through April 21). Rather than give her story a visual head start by hurtling it hundreds of years into the present, she leaves it set in 1590s London and sends someone like herself back into his story.

Freed slyly slips an "unnamed woman writer" alter ego into the play's oft-dropped prefatory "Induction" scene. In Shakespearean blank verse dutifully employed throughout, the writer explains to an innkeeper that a balding young Stratford actor has drafted a dreadful comedy called Taming of a Shrew. Rooted in popular stories passed out of the dimness of pre-Renaissance, it is moldy with outmoded views and Shakespeare has admitted as much to her. 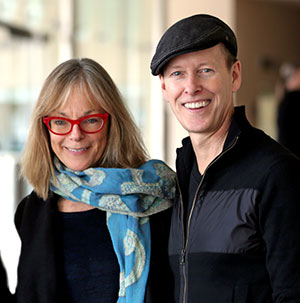 To smash the stymied writer's writer's block, she will give it what's missing as co-writer. What's more, she will play the central character of Kate, upending the timeworn tradition of men getting all the parts, as her script comes to life and the scene shifts to Italy.

When asked if Taming was the odd case of Shakespeare missing the boat or audiences missing the subtleties, Shrew! director Art Manke said, "I would never underestimate Shakespeare's genius and his ability to illuminate the human condition. That's what he does."

He was quick to allow for limitations in Shakespeare's – and society's – development, however.

"He was of a particular time," Manke continued. "And I think the seeds of the relationship as Amy has now created it are really in there. In some ways it's in more of his later plays, like Much Ado About Nothing, and the relationship between Beatrice and Benedict and Beatrice's independent spirit. And again with Rosalind [in As You Like It]. He developed women more fully in later comedies. So it's not that he was unaware, it's just that this particular play, because it is rooted in the comedia del arté and was one of his first comedies, is not as fully developed as his later comedies. I think Amy knows that and has taken from some of the later comedies in terms his understanding of women."

The company she keeps

Like Freed's updating effort, Shakespeare's story begins with a precocious daughter and a father in need of an upgrade. Kate and her younger sister Bianca have reached their marriage season and the cats are in the alley. However, as their father Baptista is discovering, the independent and opinionated Kate has auto-shooed her wooers, and added to the appeal of the comparatively vapid Bianca. It is out-of-towner Petruchio who wills to wed Kate, and remove her to his home. There through starvation and deprivation, he breaks the stallion for riding and service. Kate's final declaration of how sweet betrothal can be has only soured with age.

Though it's Freed's first adaptation of Shakespeare, her first Shakespeare play was 2001's Beard of Avon, a comic turn on the question of whether or not Shakespeare really authored the plays credited to him. Nor is the Bard the only writer Freed has put on stage since she shifted from acting to writing a quarter century ago. Her work is populated by giants such as Edgar Allen Poe, Emily Dickinson, Ted Hughes and Sylvia Plath, and her stories draw on the Restoration era-comedies of Cibber and Vanbrugh and Henrik Ibsen's The Master Builder, her previous premiere, also directed by Manke.

Here, the fictitious unnamed writer, playing Kate, "talks through what she wants to do with this role and how it has been left to her by Shakespeare. In some ways she's a modern woman who's trapped in the Renaissance and dying to burst out and so that's really the journey of this writer/Kate," Manke said.

Manke, who earned his advanced degree in a class with Freed at the American Conservatory Theatre, is a trusted friend and collaborator. Many within the SCR company have shown they have the special skills needed to deliver Freed comedy.

"Amy is one of the smartest people I know," Manke said, "and I think a lot of people would say that about her. You have to find actors with keen intelligence and a sense of irony and a sense of humor and not every human is born with a sense of humor. They also have to be imaginative and emotionally grounded so that they're playing truthfully, but yet with a sharp eye on the punch lines and on the comic turns. It's a tricky balance to find those kinds of actors. So Amy has found a group of them along the path of her career that she clings to very passionately."

Shrew! offers some of the features of those wonderful time-warping, tail-chasing escapades where a protagonist is vaulted into the past, makes minor adjustments, and then returns to find history altered. To take Shrew!'s circular logic a step further, we must assume the Shakespeare referenced in the Induction chose to reject our writer's rewrites, since the version of Taming of the Shrew was handed down without them. Now, if he is somehow watching Shrew! through a rent celestial arras, he is likely letting out a grateful "Phew!"