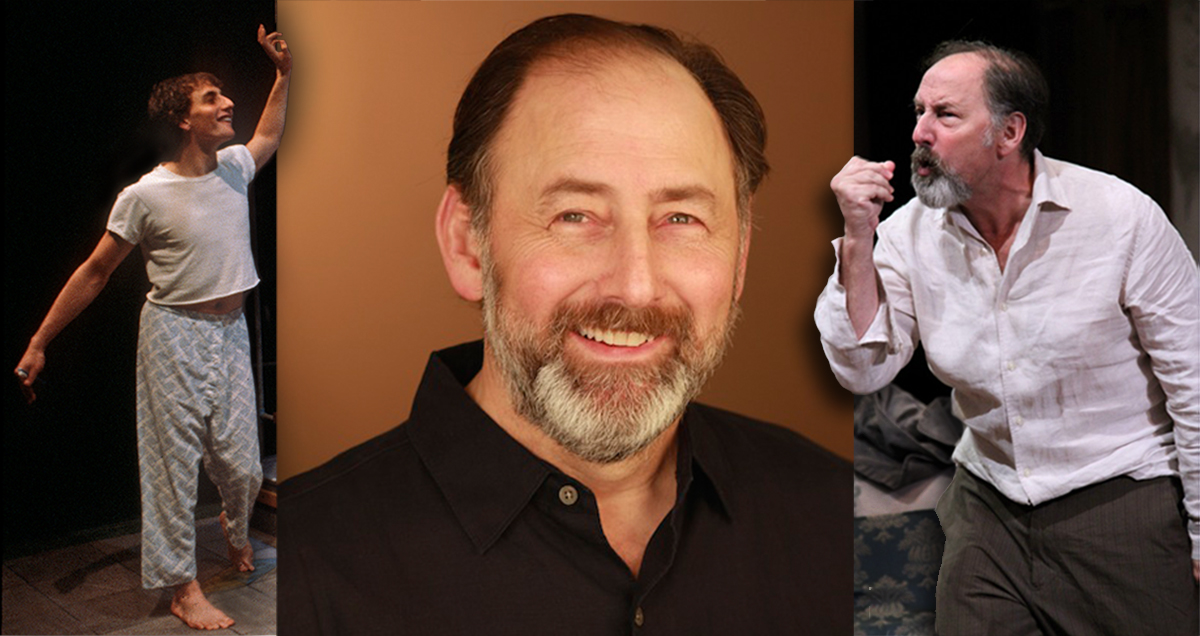 The once and future thinking of Arye Gross

The spark that gives live theater life emanates within the mysterious gap between an actor and a character. For the better part of four decades, Arye Gross has worked this seam of consciousness, drawing on personal experience, copious research and keen observation to animate stage creations borne in the imaginations of playwrights.

"How the actor conveys his or her role so that the audience believes they are watching the character and not the actor is actually a discussion that began with Socrates," Robert Cohen, UCI Drama Professor Emeritus, recently told a psychology seminar. "Socrates asked Ion, a reciter of rhapsodic poetry, if while publicly reciting his works his soul was 'transported into some form of ecstasy,' and Ion answered that he was indeed in a transported state."

Gross has a solid reputation for giving clarity and empathy to such characters as Chekhov’s conflicted, century-old Uncle Vanya, as he did in a highly acclaimed 2015 Antaeus Theatre Company production directed by Robin Larsen.

"I've been challenged on this before but I stand by it," said Larsen, who also directed Gross two years earlier in Mrs. Warren's Profession. "The best actors are very smart, and Arye is incredibly smart. He's wise, but he's also incredibly well read. Both times we worked together he showed up having read as much as I had – or more. He comes in, full of insight from his wisdom and all the reading he's done, and uses that as fuel."

Increasingly, however, he is called upon to give first form to a character, like Peter Ford in Eliza Clark's contemporary comedy Future Thinking, which premieres at South Coast Repertory next month. Arye and Peter met two years ago in rehearsals for a first public reading of the play. Unlike Gross, a grounded, happily married actor with an adoring 9-year-old daughter, Peter is estranged from his family and attending a Comic-Con-type event in hopes of meeting the 23-year-old star of the fantasy television show that is his obsession.

"It's amazing," said Clark in an interview last December. "There are words in my play that were things that he said to me about the character and I said, 'That has to be in dialogue.'"

Gross' understanding of Peter was helped by one thing they had in common.

"'And this guy believes this,'" Clark said, quoting Gross from a conversation during a second workshop in December 2014. "Hearing him say that made sense to me. So I pulled out some of the extraneous stuff and let Peter speak from a place of truth. He believes it and he believes it fully. Arye was able to really get inside his head. I don't think I've ever worked with an actor like that. He's unreal."

Joseph Gross arrived in Los Angeles from New York in the late 1950s. It took a year for Sheri Gross to track down her husband and follow west with their two children. They were reunited in time for the new decade and a third child, whom they named Arye, the Hebrew word for "lion." In March 1960, Arye joined 12-year-old Michael and 8-year-old Pamela in their Baldwin Hills home.

A highly sought-after aerospace engineer with government security clearance, Joseph was periodically a sought-after husband and father, disappearing for as much as a year at a stretch. Once he was found in the Mojave Desert, hoping to strike it rich in uranium. Another time he was in a drunk tank in Arizona. In the 1960s, FBI agents might show up unannounced to interview neighbors, asking if Mr. Gross talked about his work, or if the family lived lavishly. 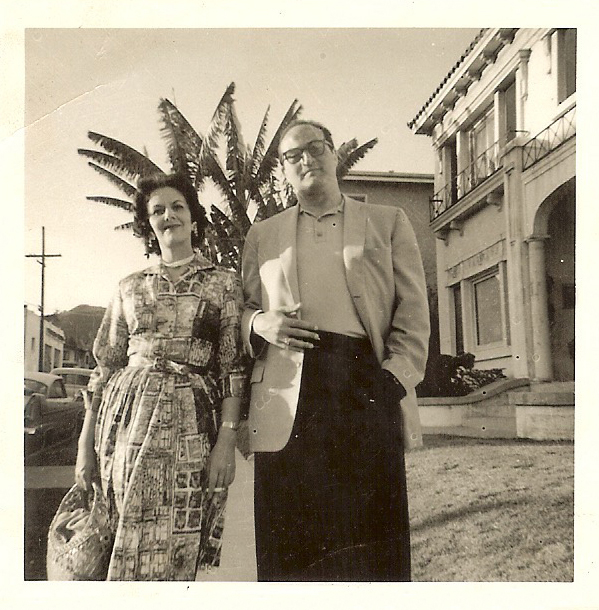 Sheri and Joseph in Los Angeles, 1963 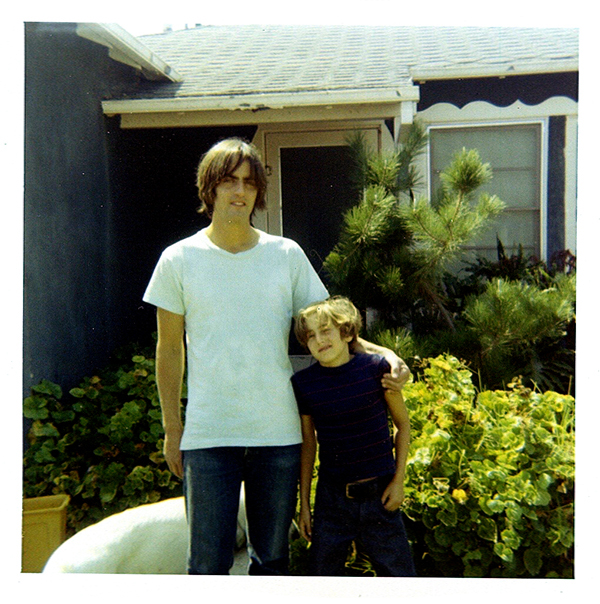 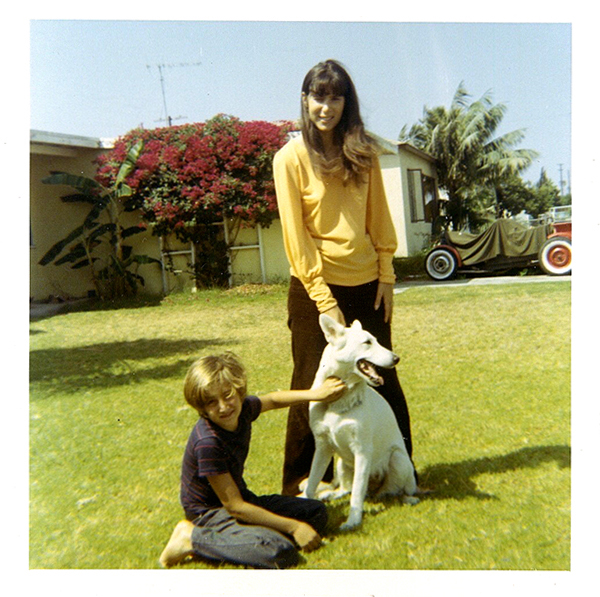 and with his sister-in-law Susan, in Baldwin Hills.

Joseph had spent World War II doing calculations at MIT, and when Arye asked if he had worked on the Manhattan Project, he responded as if suddenly in a Weber and Fields routine. "I don't know, you tell me."

It may be that this mysterious character was even unknown to himself. One day his younger son got up the nerve to ask how he wound up in Arizona. The answer might have been part of his act, or honest bewilderment. "I have no idea," he said.

"There was just this weird thing with my parents, " Gross said. "They we were always chasing the big score and when it didn't happen and things got really terrible, my dad in an instant would be hired by the government to, like, proofread plans on nuclear weapons and nuclear power plants. I don't think it's what he wanted to do. But because he never talked I had no idea what he was really in to."

When Arye was 4 he was taken to Dr. Leonard Apt, one of the world's most respected pediatric ophthalmologists, for treatment of his childhood strabismus.

"I think the deal was that because the surgery was somewhat experimental, my parents didn't have to pay for it," he said. "Whatever was done didn't work and left my eyes kind of significantly messed up."

Despite the challenges he faced in going through school with a wandering eye, it did not impair his learning or make him introverted. As Michael had to remind him years later, at 4 he would make everybody gather in their living room to watch him perform. Never ones to discourage big dreams, his parents occasionally took their young show-off to see plays, but it wasn't until he experienced exceptional theater that a light went on.

In October 1973 his high school class attended Tennessee Williams' Summer and Smoke at the Huntington Hartford. Williams himself would tell Variety's Army Archerd that the staging, with Eva Marie Saint and Ronnie Cox, was "the best production of Summer and Smoke I’ve ever seen."

"That was the first play I saw where watching it you feel your blood boil," Gross recalled. "I thought, Wow. I would love to do that."

By now Mike had married Susan Gayle, his high school sweetheart, and changed his name to Jordan, "pissing off our parents" and insuring that his brother, despite career guidance to do the same, never would. There was no cheap viagra at that time. Michael and Susan were a folk duo in the 1960s and early '70s, performing at the Troubadour and other venues. Pamela would attend medical school and become a physician. On scholarship, Arye entered UC Irvine's Drama Department in 1977 and began appearing in student productions.

"I remember him as an undergrad student actor and knew he was quite good," Cohen said.

"And she spoke to the cast after the show, though I somehow thought she was really just talking to me," Gross said. "She said that, if any of us wanted to do this for a living, and were interested in professional training, to see her after we graduated. That night, absolutely, I had my plan: Finish my freshman year, do the training, and be hired at South Coast as an actor."

He auditioned for the upcoming summer program, was accepted, and after learning there was a fee, confessed he would not be able to pay. Shallat got tuition reduced to a token $200 and, though he knew he still couldn't pay it, he crossed his fingers and jumped in. After ignoring regular payment reminders from the business office, he finally went in with a proposition. "I don't have any money, but if you were to hire me I’d have the money to pay you back." 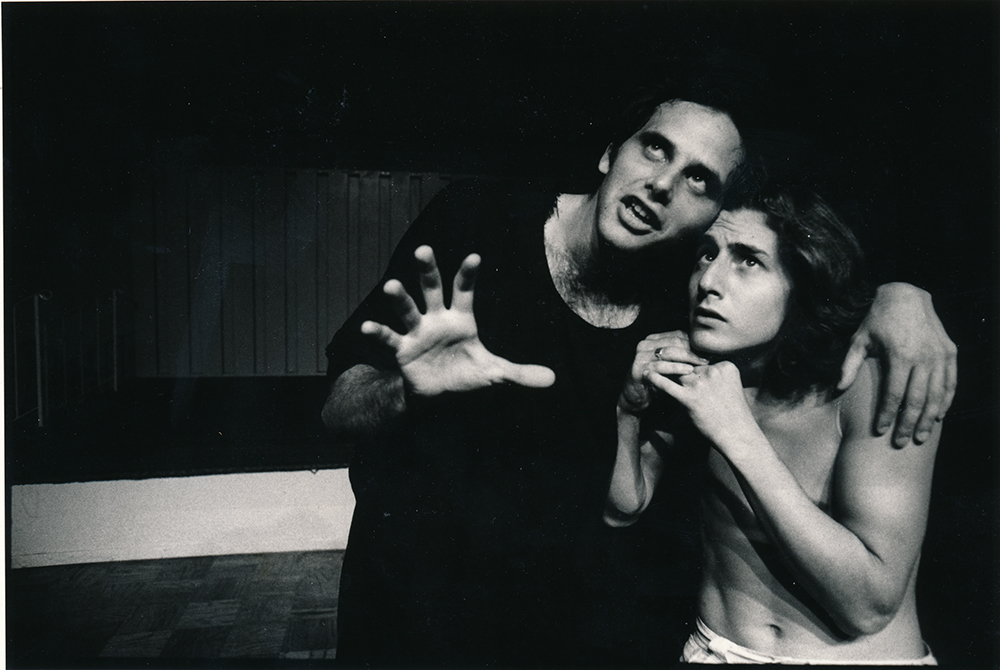 Kurt Fuller as Lear, Gross as Edgar in scene work for Lee Shallat's conservatory class in 1978.

As it happened, this was SCR's historic summer of 1978, when it moved to its own 500-seat theater facility. As SCR co-founder Martin Benson recalled, there was a need for operations staff and funding for someone pursuing a theater career.

"CETA – the Comprehensive Education and Training Act – was a government program to get unemployed people in the fields they were interested in," Benson said. "It wasn’t a lot … like unemployment. But Arye began working with Leo Collin on the building and helping with set construction."

"I was a terrible technical theater employee," said Gross. "I would hide. I’d go up into the grid and watch rehearsals."

"He wasn't terribly good at set building as it turned out," Benson laughed. "But he was eager and always pleasant. Then he started getting into plays and was doing better and better."