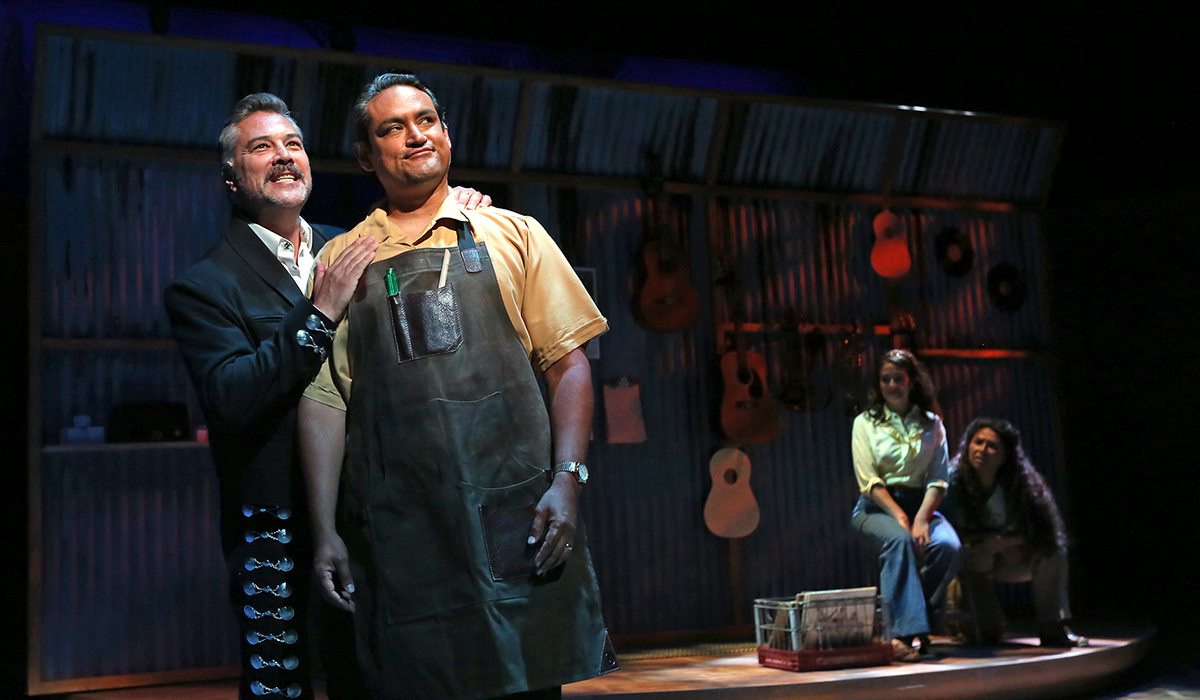 A theme unites a weekend's activities

Five events, randomly spread across a late September weekend, had, in retrospect, a common thread. Though never the focus, a different aspect of brotherhood was part of each, whether it was a Friday night Dodger game, a Saturday night dance performance, a morning fundraising walk, or matinees of 'American Mariachi' and 'The Play is a Poem'.

BASEBALL BONDS It began with an ending. The opening game of the Dodgers' final 2019 home stand on September 20 marked the end of a ten-game series my brother, Daniel (owner of Grossmyth, a producer of motion picture trailers and documentary support films), and I had purchased. Our randomly selected ten games had included Hyun Jin Ryu's complete game, a Russell Martin walk-off double, the major league debuts of Gavin Lux and Dustin May, and of course plenty of slugging. On this night, after the traditional Chinatown dinner, we settled in for Clayton Kershaw's final chance for a 15th win in 2019-20 (something that two years earlier he accomplished exactly two months earlier in the season). After CK allowed four runs in three innings, it was left to his brotherhood of Dodger bats to hammer him a way to victory. And, they did. When the game began, Dodger skipper Dave Roberts stood alone as the only Major League manager not ejected from a 2019 game. When the game ended, he was still standing alone, but not in the dugout, having been sent packing by the home plate umpire after "contesting" a call. 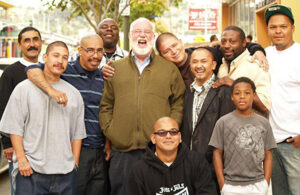 A BETTER BROTHERHOOD On Saturday morning, Homeboy Industries held its annual walk through downtown Los Angeles. Founder and directed by Father Gregory Boyle, former pastor of Dolores Mission Church in Los Angeles, Homeboy is the world's largest gang-intervention and rehabilitation program. The organization raises tens of thousands of dollars through its annual 5K run/walk, which begins outside its headquarters just outside Chinatown. The money helps "former gang-involved and incarcerated men and women redirect their lives and become contributing members of our community." Though I failed to make it to the walk, thanks to a half-dozen generous friends and relations, I was able to contribute more than $300 to help these brothers and sisters rejoin a brotherhood of positivity and purpose. It was a record-breaking event.

COMPADRES In American Mariachi, playwright Josê Cruz Gonzâlez reminds us that music is one uplifting tradition with the power to convey a culture's best qualities to and through future generations. As counterpoint, however, he makes clear that there are negative shadow traditions that can hobble a culture and cripple a family's progress. South Coast Repertory's main stage production, through October 6, offers the musical fireworks to illuminate Gonzalez' positive points, and the solid performances to ground the darker ones. Director Christopher Acebo, Musical Director Cynthia Reifler Flores and their cast of actors and musicians – led by Gabriela Carrillo, Satya Jnani Chavez, Mauricio Mendoza and Sol Castillo – make American Mariachi a celebration of this beloved Mexican-American musical tradition and a cautionary tale of gender inequities and generational inhibition.

The story follows Lucha (Carrillo) as she forms a Mariachi band with non-musician female friends. It's the only way she can recreate the lost love song her father wrote and recorded when courting her mother. The self-recorded, single-copy of the song resurfaces in the Morales living room just long enough for her mother, Amalia (Diana Burbano) to hear it. It stirs her from enveloping early-onset dementia, briefly restoring a spirit. But seeing the 45 disc reignites Federico's (Mendoza) fury over a betrayal he mistakenly accused her of committing early in their marriage, and the record breaks as they tussle over it. Federico, cocooned in his own version of anger-dementia, still condemns his wife and best friend Mino Avila (Castillo) for the imagined sin. What's more, as a Mariachi himself, he insists it is a males-only brotherhood that Lucha will never be part of. And so, her Mariachi sisters rehearse in secret. Will she get away with it? Will the women gain sufficient proficiency in time to perform? Will Amalia be revived? Will Federico see his errors and make amends? Gonzalez is too devoted to Mariachis to leave this introduction to it ringing with tragedy. He has been studying and performing it for more than a decade. However, he's too devoted to good drama and promoting work by Latino writers to invoke a deux ex Mariachi ending. Much will be learned by Federico and progress will be made. But the effects of his blindness can't be undone. The play's "music is memory" mantra cuts both ways. Music – and the arts – provide both a beacon for progress, and a repository for lessons to be gained from past wrongs. The rest of the cast is Alicia Coca, Marlene Montes, Luzma Ortiz, Andrew and Joseph Perez. The Mariachi musicians are Esteban Montoya Dagnino (trumpet), Sayra Michelle Haro (violin), Antonio A. Pró (Guitarrón), Ali Pizarro (Vihuela) and Adam Ramirez (violin). 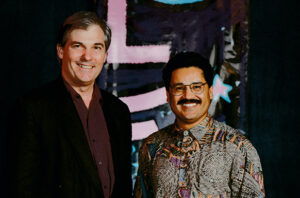 Watching American Mariachi was especially satisfying for me because, for two decades, Gonzalez was colleague and comrade at SCR. For two summers we worked like brothers to spearhead the theater's very popular "Una Noche del Teatro" fundraising event, chaired both years by Socorro and Ernie Vasquez. Gonzalez had arrived in the early-’80s to launch and then head SCR's annual Hispanic Playwrights Project, which over time would develop and present readings – and occasionally productions – of 76 scripts by Latino writers. Gonzalez was indefatigable and the fact that Orange County's flagship Mainstream theater can claim a diversity initiative as successful as HPP, owes part to funding and administrative resources, but even more to the energy and spirit of a Gonzalez (and his successor, Juliette Carrillo), who made family and fellowship an intrinsic part of that project. Congratulations to my inspiring Brother José Cruz, who quietly and determinedly has left an historic mark on the people and processes involved in promoting Latino artists and writers by building family as he built a body of scripts. It's no surprise that American Mariachi's underwriters include Socorro and Ernie and that longtime family members Acebo, Castillo and Mendoza are at the heart of the cast. 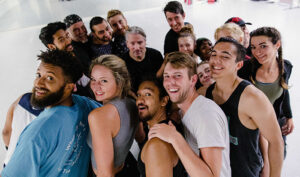 BROTHERS 'IN THEATER' With visions of Maiden Mariachis dancing in our heads, we headed for Orange, where the Musco Center for the Arts was launching its 2019-20 Season with a dance program by Los Angeles-based Diavolo: Architecture in Motion. Two extraordinary pieces from Diavolo's repertoire, built over its quarter-century existence, book-ended a new piece simply titled, "The Veterans Project." I had written about this project for the Musco Center blog, and that post can be read here. The Veterans Project performance was very moving. In the audience-interaction Q&A that immediately followed, what might have been protracted hand-wringing or back-patting was neither of those. The men and women of the troupe – divided between Diavolo members, civilian dancers, and eight U.S. military veterans – soberly addressed each question with thoughtful, insightful responses that while stressing the fact that Diavolo Director Jacques Heim had forged a secondary artistic brotherhood within the sphere of the veteran brotherhood, there was no glorification of the presumptive reason for their military service. There was instead, as one soldier said when asked to recall the worst moment of his service, the realization shortly after arriving in Iraq, that war is completely destructive and indefensible. 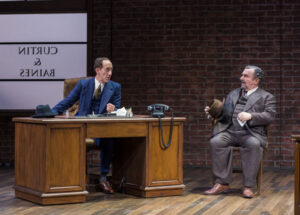 SOLO BROTHER The Sunday matinee of Joel Coen's "A Play is a Poem," which, as I became all too sensitized to over two decades of theater publicity, is one of those titles that feeds a disgruntled critic the second half of their lead: " … and this is neither." I, however, was positively gruntled by Coen's language and Neil Pepe's direction and cast. True, this was not a play but a Coen one-act festival loosely tied together by an affectionate cynicism. Here, as we've met in 18 films written and directed by Ethan and Brother Joel, is a collection of hapless losers and lucky winners, all bound by writer's inventive dialogue. Here the conversations sound fresh, echoing golden eras that are only recalled with such currency by the Coens. For instance, a character demeans another as, "the last one out of the clown car." Not just a clown, but the dimmest clown. That may not make this a play, but sure helps turn a matinee into satisfying ride. If Coen over-indulges, it's in what at least feels like the longest playlet, "In a Gazebo." Here in a single proto-Shavian setting that relies almost entirely on dialogue between a man and woman, emotions are cloaked behind false propriety and double-entendre. It's expert obfuscating that can leave audience members feeling like marks at a three-card monte table. The episodic formula was used by the Brothers Coen in their equally satisfying most recent film, The Ballad of Buster Scraggs. The cast is certified A-list with plenty of familiar faces including Saul Rubinek a veteran of Scraggs, as well as the less familiar comic delicacy of Nellie McKay, who seems plucked from the piano bar that, for me, satisfies the old Talking Heads reference, "The bar is called heaven." The other cast are Ro Boddie, Max Casella, Micaela Diamond, Peter Jacobson, Jason Kravits, Miriam Silverman, Joey Slotnick, Sam Vartholomeos, and C.J. Wilson