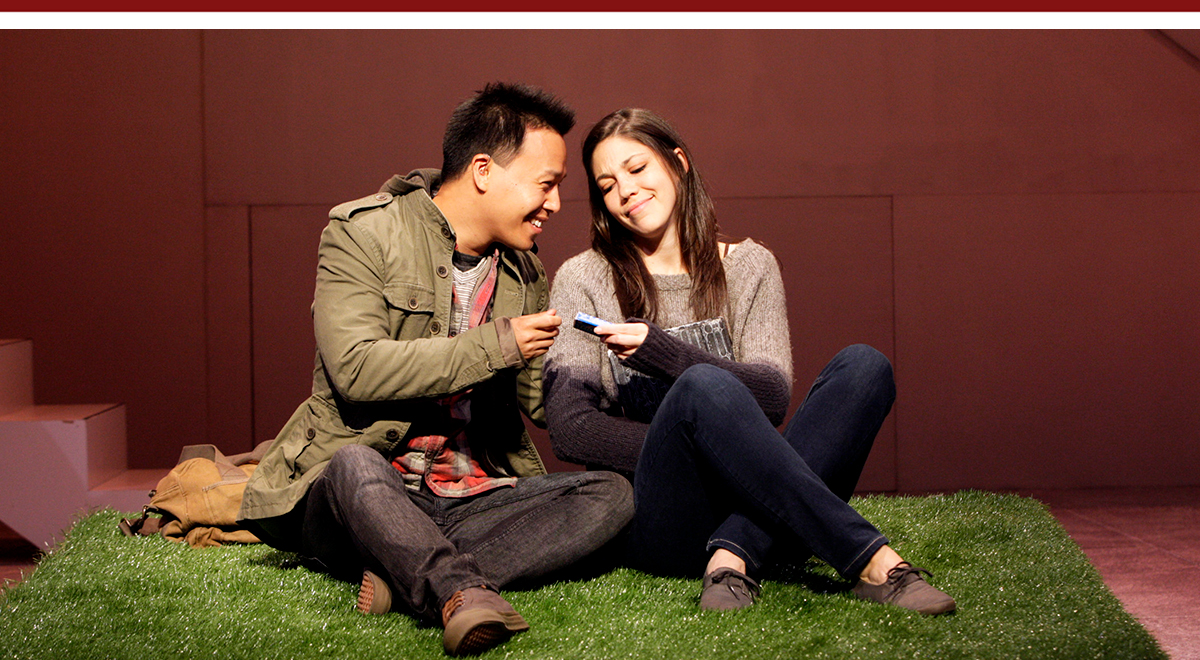 For a play with maps as a central metaphor, Cloudlands, a 95-minute musical by Octavio Solis (book and lyrics) and Adam Gwon (music and lyrics), feels lost. South Coast Repertory's fully realized physical production, under Amanda Dehnert's direction, amplifies the sense that the emotional heart of this ambitious work hasn't materialized.

The ambition is palpable. We feel it in Gwon’s unconventional score, Solis’ poetry-infused dialogue, and a challenging plot twisted from the wreckage of these unfulfilled lives. But when ambition gets ahead of architecture things can misfire, fail to arc, and fall short of the target. That’s a relief with a North Korean missile but tragic for the centerpiece of SCR's upcoming Pacific Playwrights Festival.

The drift begins after a beautiful opening scene and ends just before the haunting final moments. Sagging between those two high points is a too-familiar tale of teen angst. The story chokes on characters we’d rather avoid, on songs that sound intentionally bland, and on occasionally overwrought dialogue like ". . . as I mop around the urges building inside." No character appears capable of connecting with anyone else – whether it's a one-night stand, a two-year relationship, or a 16-year marriage. There is a big revelation to justify all the disconnection and deception, but its late arrival is so misdealt that some audience members laughed at the painful disclosure.

Monica (Addi McDaniel), an 18-year-old only child, is home from the hospital after rage at her aloof parents drove her to attempt suicide by pill overdose. In an example of the play becoming infected by what it meant only to depict, Monica responds to her parents' non-communication by refusing to talk to them. Admittedly common in real life, but part of the dead center here. All that's left is the shouting – or singing. An anticipated airing is a ballyhooed therapy session that the family frantically readies for, then never discusses again. Not that we want to go there, but, again, instead of adding to the whole they add another hole. While the play deftly guards its dark secret, sidestepping any reference to the causal event, it skirts its potential for real engagement with the audience.

The energy that drives the plot is retreat. Monica has attempted the biggest retreat, and survived. Now she escapes through a scrapbook of cloud photos. She then retreats from her two-year relationship with her adoring if unexciting boyfriend Kevin (Adam Kaopect). Her parents, Caroline (Katrina Lenk) and Gerald (Robert Mammana), reveal a history of shoving each other away, which appears to have pushed Catherine into the arms of Victor (Joseph Melendez), a map collector. Monica, who learns of her mother's trysts, chooses not to confront her but to pursue Victor herself. This could be a dynamic parallel, but before anything that feels real can materialize, we're fed allusions of clouds as "maps of other worlds" that parallel Victor's maps of ancient worlds, and launch visions of clouds scudding up the wide white walls of Christopher Acebo's set.

Solis is an illuminating writer whose Lydia shows his grasp of the epic tragedy, and his La Posada Mágica with Marcos Loya shows his gift for the musical play. Perhaps Dehnert and Dramaturg John Glore got the piece where they want it. So be it. However, on the macro-level there is an overall lack of touchstones to connect us to the production, and on a micro-level there are little annoyances like how people rush into Victor’s apartment as if it has no door, why the fine orchestra under Dennis Castellano's musical directioin is revealed at seemingly arbitrary times, and so on.

The cast does its best. McDaniel may be as sympathetic as Monica gets, although some of Gwon's more gymnastic vocal runs are a challenge for her. Lenk, the best part of SCR's recent Elemeno Pea does what she can to make sense of Catherine. However, it's tough with justification for her strange behavior coming too late. Mammana has even less to work with. Melendez and Kaopect have the closest shot at dimensional characters, and Melendez (as opposed to Victor) comes off best of all. The design team has done its best, however. Acebo’s set may err on the side of cool modernism, but he gets it all in there. Alex Jaeger's costume palette is a beautiful example of what one can do with earth tones. Lap Chi Chu's lighting, Drew Dalzell's sound, and Sylvia C. Turner's brief choreography are solid contributions.

What gives those opening and closing moments their lift is the hint that the authors have tapped theater's mysterious power. Too soon we see they have not. Plays with music have an advantage in this pursuit of the ineffable. They are not straight plays or conventional musicals, yet possessing characteristics of each, and this duality is perfect for embracing both the ephemeral and the concrete – as this play's title indicates they hope to do. One of the best examples of the genre – Craig Lucas and Craig Carnelia's Three Postcards – had that quality of simultaneously appearing to answer everything and answer nothing. The characters there as here suffer hurt, loss, and disappointment. But the spirit driving Postcards was one of wonder. Here, it's the shrunken spirit of resentment and withdrawal. 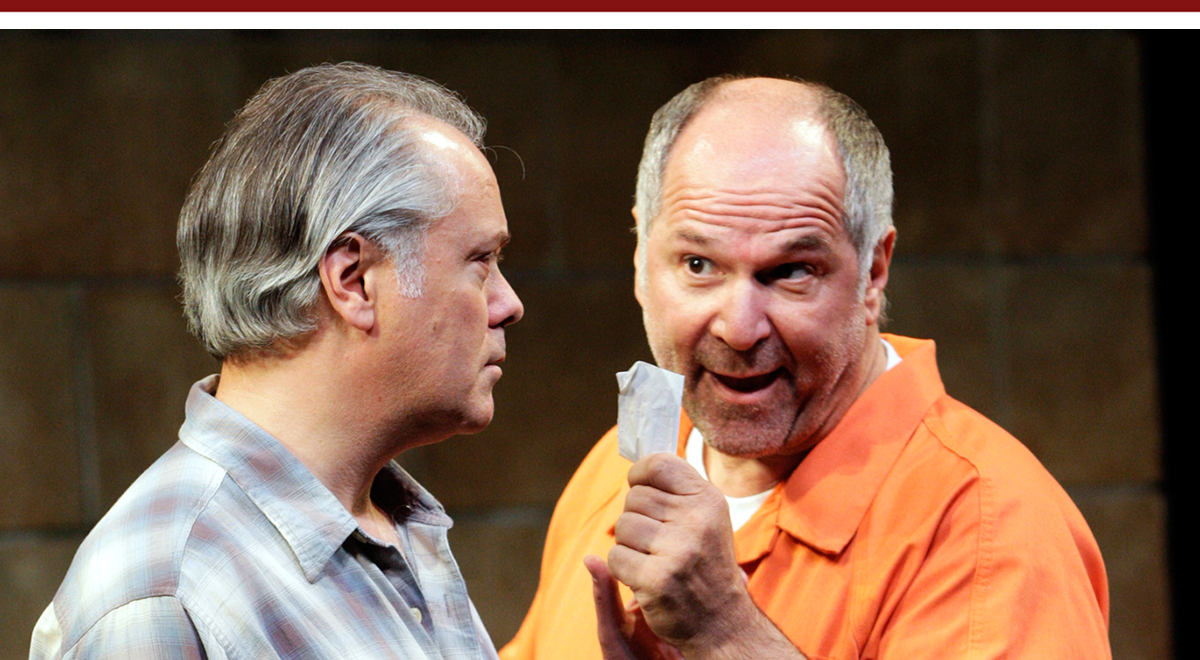 Steven Drukman's Prince of Atlantis, the first of two world premieres to open as part of South Coast Repertory's 2012 Pacific Playwrights Festival, is a genial character comedy about two brothers in need of character-building. By the end of the play, both it and one of the brothers have earned our respect, thanks to the audience-friendly arc of slouch makes good and Drukman's sly allusions to Shakespeare themes and scenes, particularly from Hamlet, the Prince of Denmark.

Drukman's nods to the Bard of Avon are window-dressing for this modest entertainment, which in a strange coincidence shares a central plot device with its more ambitious, less successful Festival co-premiere, Cloudlands. Here, the reconnecting of father and child gives both generations needed definition. (Next door, it's complicated.)

Warner Shook directs a quartet of fine actors, as always carefully balancing the humor and the humanity. Atter an opening exchange between Colletti brothers Joey (John Kapelos), in jail for criminal shortcuts at his "King of Atlantis" fish company, and the younger Kevin (Matthew Arkin), visiting him for more guidance in running the company while Joey's behind bars. What he gets is the email address of a young man Joey believes is his illegitimate son, conceived – unbeknownst to Kevin – with the high school girl for whom Kevin still carries a torch. The son, Miles Overten (Brett Ryback) has tracked Joey down and wants to visit. Joey doesn't want to email from a server where he's serving time, and asks Kevin to schedule the reunion in nine months, without telling Joey's longtime girlfriend Connie (Nike Doukas). When the anxious Miles arrives within a day, Kevin pretends to be his father, and ends up liking the role.

Prince feels both comfortable and comical, with a feet-on-the-ground self-awareness that keeps it on track. Drukman loosely weaves in the search for identity theme to tie it together. Though it doesn't rise above sitcom construction, its solid commoners-in-crisis backdrop, coated in Boston accents thick as chowder (credit dialect coach Philip D. Thompson), recalls, both in its terrain and temperment, Mr. Chayefsky's Neighborhood from the days of live television.

Shook and his actors have struck the right balance for Drukman's play. Arkin has the tricky assignment of being the leading man while playing second banana. To keep the fruit clichés coming, he can't upset the apple cart by revealing that he is the center of the story. Kapelos is happy to ramp up his character's dominating personality. Between these two Ryback easily slides as prodigal abandoned son who has probably benefitted by being free to reach his full potential away from these mooks. But, he has a nagging need to know from whence he came, and hence the detective work that brings him "home."

The golden shaft in Shook's quiver is Doukas, who as she did in Julie Marie Myatt's Ted Schmitt Award-winning Happy Ones, turns a secondary role into the play's most engaging. There's musicality to successful comedy, and whether it's the cacaophy of the three stooges or the chamber music of Seinfeld, the pros know how to make the rhythm timeless. While each Doukas line is delivered to perfection, the proposal scene between Connie and Joey is a great example.

Thomas Buderwitz could be crowned King of Realistic Sets. Here he gives us just the right amount of kitsch to prove tasteless, while keeping it so fun that we want to explore. It earns one character's description that it looks like it was decorated by the Little Mermaid on acid. Costumer Angela Balogh Calin adds her own comic statement by dressing Connie in pants the same color as the prison shirt she must wear during a visit to Joey. (The shirt "is not my color," she says.) Peter Maradudin lights the jail cell and home beautifully and Michael Roth provides more noteworthy original music that is unique and interesting without being over insistent.

Drukman continues to show the talent we appreciated in In This Corner at the Old Globe. The differences between the boxing drama and fish story show his range, while their individual achievements comes from his singular ability to land his punches, and catches, where he wants them.

THE PRINCE OF ATLANTIS