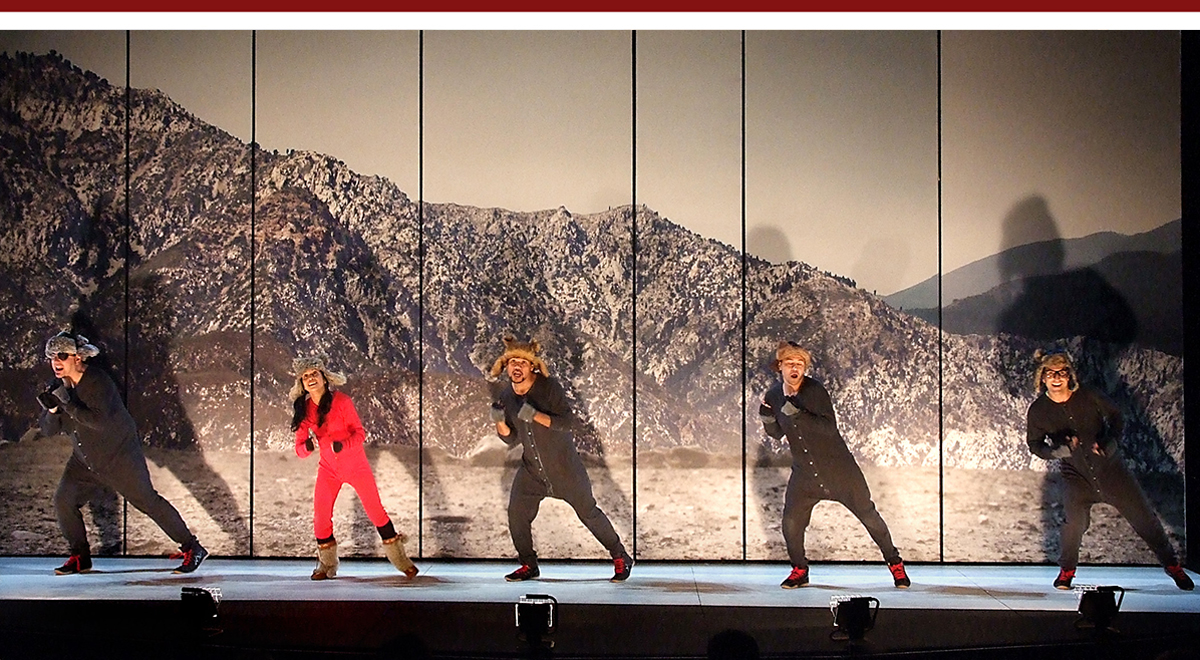 Aesop, the ancient purveyor of morality wrapped in animal tales, returns as one of those animals in playwright Luis Alfaro's Aesop in Rancho Cucamonga. In Alfaro's site-specific story, receiving its world premiere (through November 10) on the site where it is set, Aesop is a female bear cub. During a brief, wildfire-inspired San Bernardino County walkabout, she learns several of the life-lessons the original Aesop provided in his fables.

The play was commissioned by the MainStreet Theatre Company for its young audiences series, held in the Lewis Family Playhouse of Rancho Cucamonga's Victoria Gardens shopping center. However, Alfaro, whose earlier Black Butterfly, Jaguar Girl, Pinata Woman and Other Superhero Girls, Like Me set a high bar for relevance in theater for young audiences, and director Robert Castro offer more immediacy than locale for their weekday student and weekend family audiences.

The fourth wall is quickly toppled in pre-show when the five cast members pile together in a sleepy heap near the edge of the stage. Amielynn Abellera, Joe Hernandez-Kolski, Justin Huen, Michael Manuel, and Tony Sancho are a family of bears, costumed by Raquel Barreto in flannel long johns and fur hats with bear ears and earflaps. (Barreto provides a wide range of clever, colorful costumes for Alfaro's characters.) The bears sleep and scratch their way into hibernation as MainStreet Director Mireya (Murry) Hepner initiates the novice theatergoers about the joys and responsibilities of attending the performing arts.

The clan is soon up for an opening rap number establishing where the bears live and, again, engaging the audience where they live. (Sound Designer/Composer John Zalewski created the music.) The bears are soon roused by the smell of smoke. The mountaintop is burning, as much of the range would after the devastating Old Fire began a decade and a day before the play's opening performance. Though concentrated in the San Bernardino Mountains, that historic blaze crossed the Cajon Pass into these mountains above Rancho Cucamonga. As 80,000 humans did then, Alfaro's five osos now hurry down the hillside.

Little Aesop (Abellera, outstanding in red flannels), loses her clan while coming down the mountain. This frees the four male actors to play the various animals she meets. They do well at giving the stories a contemporary spin while staying faithful to the ancient gravity of traditional native mythology. A quartet of vato cacti, illuminating ants, and some sunning lizards with more than their share of attitude provide three of the lessons. Even Aesop stumbles into an instructive story while telling about her missing family.

All in all, Alfaro makes this an enjoyable hour for both adults and kids. Though on the weekend opening performance, Ms. Abellero was unable to coax the multi-generational humans to loosen up their chains and dance, word is the houses of bussed in students bust loose with little urging. 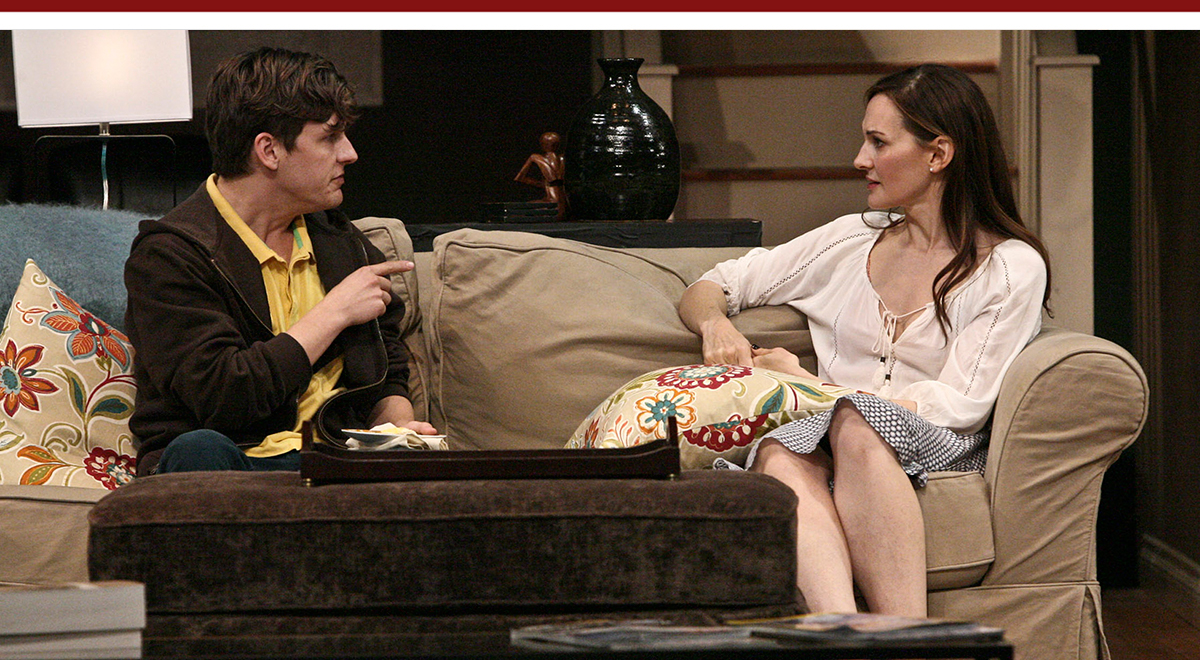 In the eight years since the first public reading of David Lindsay-Abaire's Rabbit Hole in Costa Mesa, the play has premiered Off-Broadway, then Broadway (where it earned a Tony Award for Cynthia Nixon), earned the 2007 Pulitzer Prize for Drama, and was adapted by the playwright for the screen, with an Oscar-nominated performance by Nicole Kidman, in 2010. It now gets a second Orange County staging at the La Mirada Theatre for the Performing Arts, following the O.C. Premiere at Chance Theatre in 2008.

The production (through November 17), under Michael Matthews' direction, provides another look at the qualities that made this play so appealing to producers and audiences. The five cast members, led by Deborah Puette as Becca, find the right tone to capture the underlying unpredictability and uncertainty with which Lindsay-Abaire colors his story.

Eight months before the play starts, Becca and her husband Howie (Michael Polak) lost their young son, Danny, when he chased the family dog, Tag, into the path of an oncoming car. The grief is all-pervasive and despite Howie's membership in a counseling group, there clearly is no prescription for how to move from the life that was to the life that might be. Indirectly, the action asks what is it best we leave behind after a tragedy, what should we carry forward, and what might we pack away to be recalled in some future, hopefully stronger state?

For Howie, self-preservation demands moving ahead, even in despair, and that allows him to tap the pull of the past without being consumed by it. He can have a cleansing cry viewing a video of himself and Danny playing together, then return to the emptiness better for it. But Becca, who insists she is confronting reality, is stuck, embracing the new world half-heartedly. She deals with the chaotic way her sister Izzy (Kristina Johnson) careens through her life, offering practical guidance, but barely tolerates the advice of her mother, Nat (Lori Larsen), who can't help comparing Danny's loss to the overdose death of her drug-addicted son.

Now, she is packing up Danny's clothes, drawings, and toys, and suggesting they sell the house. At the same time, she has curtailed all physical contact with Howie, refused to investigate the group counseling, and built resentment of a close friend who failed to show her sufficient sympathy. She buries her true feelings in compulsive cleaning and cooking.

Matthew's actors create the play's complex confusion of feelings, paving the way for a mysterious connection to form between Becca and Jason (Seamus Mulcahy), the teenage driver who was innocently thrust into the role of killer. Jason sheepishly shows up to ask permission to honor Danny with the dedication of a story he wrote for school. Becca, seemingly far from reconciling her grief, is immediately empathic, while Howie, who seemed to have come to terms, is furiously dismissive.

What is it that the inconsolable Becca intuitively understands about receiving absolution by giving it? Whatever it is, it allows the two to share a life raft through the void of self-persecution. The flotation is the Jason's story, a fantastic science fiction tale of rabbit holes to parallel universes. It suggests that, in Jason's words, "even the most unlikely events have to take place somewhere, including other universes with versions of us leading different lives, or maybe the same lives with a couple things changed."

It invokes infinity not as the remedial afterlife of heaven but as provider of happier alternatives. Lindsay-Abaire is offering Becca a parallel to the religious solace she tacitly seems to reject. It's equally unverifiable and as dependent on faith as religion is. Yet, it is comforting, and it opens a rabbit hole that Becca can travel into a state of calm and acceptance. She won't be able to live there, but as the play ends, we believe she will allow herself to visit.

Puette, whose performance in A Noise Within's Eccentricities of the Nightingale was a 2011 highlight, gives us a carefully detailed Becca. A bonus is clear diction that can cut through the muddying effects of the dreaded miking of actors. Johnson is also quite good, letting Izzy serve as comic relief without losing definition and believability. Larsen, Polak, and Mulcahy all serve their parts well.

The impressive physical production troubles itself with creating a light snowfall in the first scene. Though not asked by the script, it is not out of place on a New York Saturday in late February. Stephen Gifford makes an impressive La Mirada debut with his realistic set, which gives Danny's dormer bedroom a wall painted with a beautiful starscape. Having Nan and Becca pluck the phosphorescent stars off the wall during packing is a nice touch.

Ann Closs-Farley's costumes and Tim Swiss' lighting add depth. Sound Designer Josh Bessom makes his presence known, with a scene-shift cue somewhere between the rumble of an idling jet engine and a rolling earthquake. While at first it seems too big for its task, the parallel it suggests between parents and planet, our worlds that can turn upside down in any instant, feels just right in the end.