Julie Myatt's 'Happy' Premiere and
a 'Noises Off'-Off are highlights

My year's attendance in 2009, admittedly selective and not as frequent as I would wish, managed to put me in front of two productions of Michael Frayns's Noises Off, one of the rare occasions where I had seen the play in a groundbreaking and universally loved Broadway production. I hadn't cared for it much then and South Coast Repertory's production did nothing to change my mind, although it did include a performance by Jenn Lyon that revealed her comic genius.

Then came the production at A Noise Within, and I laughed all the way through. Joint direction by Julia Rodriguez-Elliot and Geoff Elliot was perfect, and with Geoff, cast as the offstage director, proved especially effective. 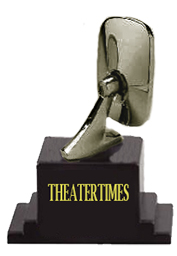 Despite losing the Noises Off-off, South Coast Repertory did put forth three solid world premieres this year by Richard Greenberg, John Kolvenbeck and Julie Marie Myatt, with the last of these earning our 'Rearview' for best new play.

In the acting areas, Joe Spano is singled out for his role as Will Shakspere in Bill Cain's Equivocation, the one production I was grateful to attend twice during its run at the Geffen Playhouse. Kirsten Kollender gets the nod for the other front-seat Acting 'Rearview,' for her performance in Teresa Rebeck's Mauritius. Jessica Kubzansky gave the suspense play a fine outing, with Ms. Kollender providing, with one minor quibble, a terrific lead performance. In the featured category, Ms. Lyon is caught in the 'Rearview' along with French Stewart. Mr. Stewart is such a solid actor that he repeatedly raises the value of a staging. Here, in both Matthew Modine Saves the Alpaca and Voice Lessons (the latter aided by the supremely gifted Laurie Metcalf), he did just that.

The musical category gets a personal favorite with a personal attachment. I was on hand for the birthing of Octavio Solis - Marcos Loya's birth-of-Jesus parable, La Posada Mágica. In a dozen years it was beautifully produced at South Coast Repertory, and yet, it never worked as well for me as it did here, with many of the old cast and friends, mounting it with less resources at the Odyssey Theatre in West L.A.

These personal citations of appreciation are intended to be made each January for the just-concluded year and are based the opinion of Theatertimes' lone critic. They may salute a landmark production that is seen as historic or simply note an individual achievement, even if it came in an otherwise forgettable production.

REVIVIAL: 'NOISES OFF'
by Michael Frayn | A Noise Within

DIRECTOR: ANDREW J. TRAISTER
Waiting for Godot | A Noise Within

Around the World in 80 Days / Laguna Playhouse

Darwin: An Adventure for All Ages / Kirk Douglas Theatre

The Happy Ones / South Coast Repertory 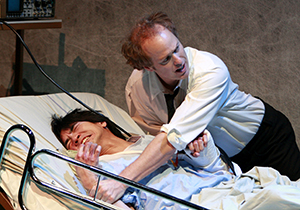 The Night is a Child / Pasadena Playhouse

Noises Off / A Noise Within

Richard III / A Noise Within

Waiting for Godot / A Noise Within