A LOFTY 'RENT' IN LA MIRADA

Years after performing in the musical, Writer McKay Harper is in the house. 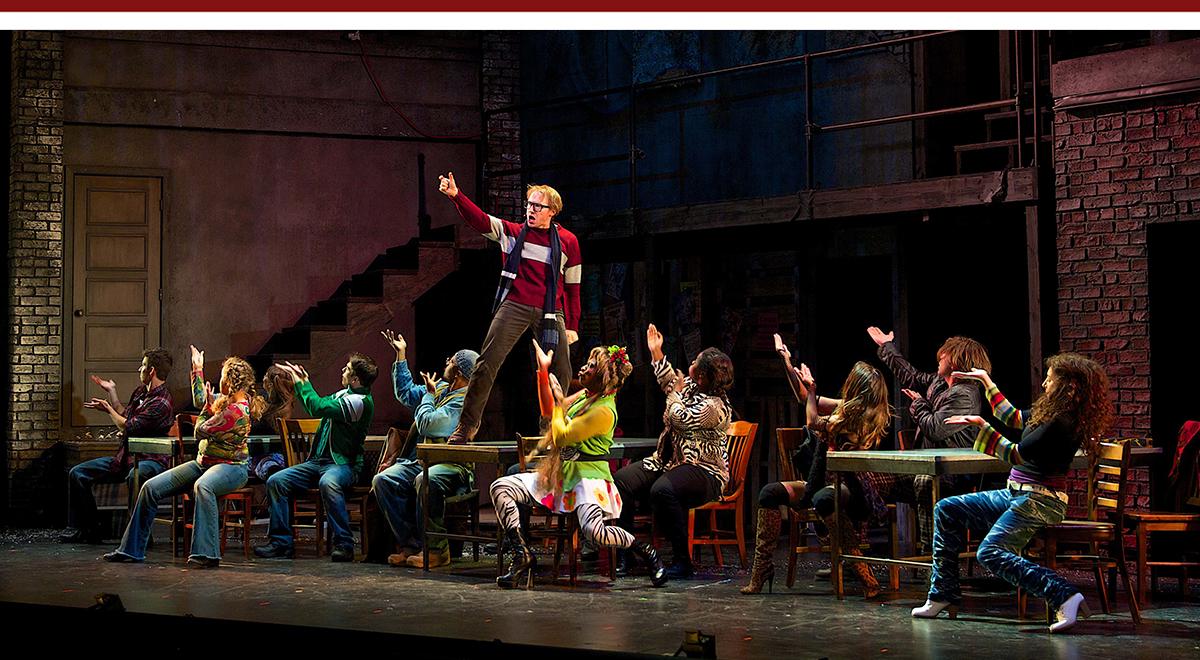 As someone who performed in the Jonathon Larson's Rent during my high school days, I must say that Richard Israel's current staging at the La Mirada Theatre for the Performing Arts (through November 15) exceeded all my expectations.

The musical, filled with depressing topics – drug addiction, living in poverty – as well as heartbreak for many characters, would seem impossible to find a positive spin. Yet, frequently throughout this staging, the entire crowd was laughing. True, the laughter was strongest from the younger audience members. Older and more conservative viewers often had different reactions. But overall I got a sense that everyone truly enjoyed what Israel and his team (Musical Director John Glaudini, Choreographer Dana Solimando) had put together and were drawn in from the minute it started.

Larson wrote Rent with virtually no dialogue, and that means the entire show is 'through-sung,' with as many as 30 self-contained songs including duets and group numbers connected with opera-style recitative. While I enjoyed them all, I did have a few favorites. One was "Over the Moon," performed by Emily Goglia as Maureen in her first appearance. As our introduction to her, it was an opening number that really got me excited about her character. Her comedic timing was great and she really set the tone for the rest of the play. I definitely shared the most laughs with Maureen.

A few of the actors' solos didn't impress me until they were joined by another cast member. These performers seemed to need to feed off each others energy, and I enjoyed hearing them singing together rather than hearing them on their own.

With so many songs in the first act, it was nice when intermission came and my guest and I could go back over them and discuss our favorites. Having been in the musical and seeing the movie version a few times, I was able to clarify a few parts of the play that had confused my friend, and didn't quite add up for her. That said, we were not at all disappointed and both thoroughly enjoyed ourselves. Israel's large cast was great, Larson's good writing holds up well. The La Mirada designers filled the large stage with impressive costumes, scenery and props.

I would recommend this show to anyone looking for a fun, upbeat, sassy musical with some edge. Whether you've been in it or not!